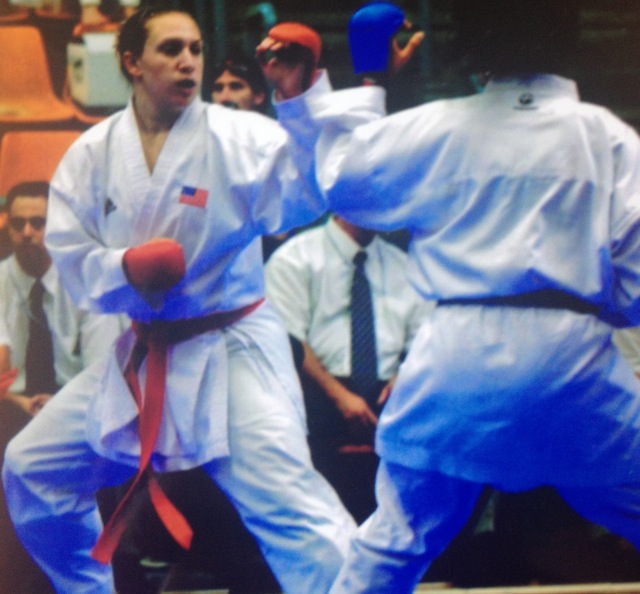 When I was a kid I had a dream. One day I would walk into a stadium wearing red, white, and blue, waving the American flag, representing my country. The stadium would be packed with fans from all over the world decked out in their country’s colors. I’d cheer on my teammates, and they would cheer for me, and eventually I’d stand atop a podium with a flag draped over my shoulders and a medal around my neck, listening to “The Star-Spangled Banner” with tears running down my face.

In 2005, I thought that dream was going to come true in the summer of 2012–in New York or London or Paris or Madrid or maybe even Moscow. I was 21 years old and a world-class athlete at the top of my game. It seemed like just one vote by the International Olympic Committee stood between me and the 2012 games. Would the IOC at last add karate to the roster of Summer Olympic sports?

The games I thought I’d participate in are unfolding right now, producing the usual stories of perseverance, inspirational comebacks, and underdogs-turned-champions. But for every Olympian who made it to London, there are thousands of stories like mine.

I’d dreamed of going to the Olympics since 1998, when I made the U.S. Junior National karate team. I was 13. In 2004, I brought home two gold medals from the World Karate Confederation’s Junior World Championship, as an individual in the 18-to-20-year-old +60 kilogram kumite division (a form of sparring) and as a member of the U.S. three-person women’s kumite team. In 2005, I won a gold medal at the Senior World Championships and at the Maccabiah Games (the Olympics for Jewish athletes). Along the way, I won several U.S. national championships and traveled around the world–to Europe and Asia and the Middle East–to compete. At one point, I even had two passports to ensure that I could fight both at the Dubai Open and in Israel.

There were costs to this success. I routinely gave up time with friends to train on afternoons and weekends. I traveled for competitions and missed birthday parties and school dances. At 15, I was spending the first half of the school day in the classroom and leaving to train after lunch. When I moved 1,000 miles away from my coach for college, I trained by myself on the squash courts before the rest of campus was out of bed, and regularly missed weeks of class for competition. My roommates were on the softball and soccer teams, and they’d gripe about early morning practice–but their practice was mandatory, with 15 of their closest friends sharing the burden.

I was 21 in 2005 and a world champion a couple times over; it was possible that I wasn’t yet at the peak of my career (most women are at their best in karate from 24 to 28). I was in Jerusalem for a tournament when the IOC voted on whether to include karate in the 2012 games. The committee voted no–for reasons that were almost purely political. Karate is overseen by multiple governing bodies with different sets of rules, so choosing one body for the Olympics is difficult. Karate is also a judgment call sport that relies on referees to choose a winner. The Olympic Committee prefers sports like track where the victory goes to the first person to cross the line, making controversy less likely.

When I got back to the States, I had to face reality. I was a junior in college, working my butt off to be a good student, a good friend, and an Olympic-level athlete. But my Olympic dream was crushed in a matter of minutes by a bunch of members of the IOC who had never met me. If part of growing up is putting aside your dreams for more achievable goals, that’s the moment I became an adult. I decided to apply to law school. At age 23, I went into retirement.

It wasn’t that I stopped loving karate. I still love it. I gave karate everything I had for more than 15 years of my life, and got self-confidence, strength, character, discipline, a sense of accomplishment, passports filled with stamps from around the world, incredible friendships, and innumerable memories in return. I don’t regret the time or the passion, or even the injuries. What I wish had happened differently–the chance to compete in the Olympic Games–was beyond my control.

Being a member of the U.S. Karate team is great, but a world championship is not an Olympic Games. There is something different about winning not only in front of your own teammates but also in front of the world. Particularly for the sports that, like karate, don’t offer glory in the form of money or endorsements, and rarely (if ever) turn up on SportsCenter. The largest number of people who ever watched me fight was the 3,000 who saw us win a team gold medal at the world championships in Serbia. Internationally, I rarely fought in front of any fans. There were a few exceptions: My parents saw me compete once in Russia, my college roommates cheered me on in Germany, and my brother got to see me disqualified during my last international match, in Italy in 2007.

Seven years after the IOC decision, most days go by without me thinking about my past life as an aspiring Olympian. But during the Olympics, I think about it all the time. As much as I enjoy my life now, I still wish it had been me boarding a plane to London and putting on my brand-new (made in China) Ralph Lauren warm-up suit to march out into London’s Olympic Stadium.

But since I couldn’t do that, I am diligently watching the 530 Americans give it everything they have in pursuit of the dream I once shared with them. I know all too well how long the odds are to reach the Olympics. When my fellow athletes cross the finish line first or touch the wall first or nail the landing after a flawless routine on the balance beam, I will feel chills run down my spine.

Kate Roin is a lawyer working for the federal court in Chicago, Illinois.