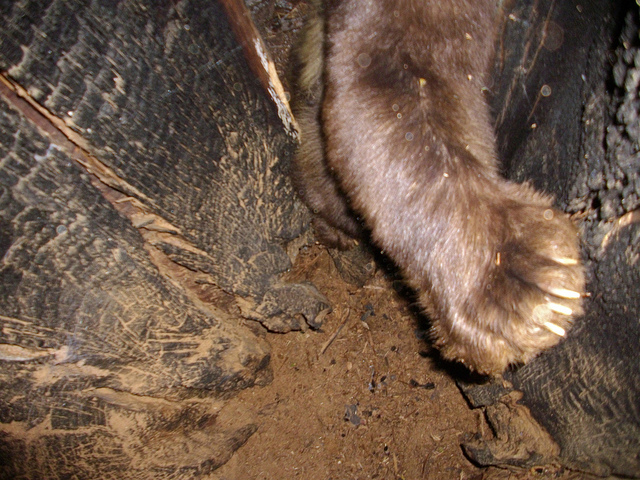 Over the spring and summer months of 2012, the city of Glendale has had repeated visits from a mysterious black bear with a love of suburban ranch houses, frozen meatballs, and fresh garbage. He has been called “The Glendale Bear,” “Glen Bearian,” “Meatball,” and “The Next Mayor of Glendale.” Until today, we’ve heard from him only in 140-character tweets, but now, for the first time, Glen Bearian takes to the pages of a major publication to bear all.

Call me Meatball. Some years ago–never mind how long precisely–having little or no food in my belly, I began to visit the neighborhoods in and around Glendale. That’s where I first found a collection of flavorful meatballs in a garage freezer. I also met a distracted text messager in his backyard. He seemed alarmed and fled. Some began to call me by my full name, Glen Bearian. People have asked who I am. They want to know what I think. They want to know how I come by my fashion accessories, such as the orange tag in my ear. So let me start at the beginning.

My life has not been easy. I grew up in the woods, scrounging for nuts, berries, and hiker litter. Forest fires were rampant. (The Station Fire still gives me nightmares while hibernating.) That said, relations between us bears and other species, human ones excepted, were friendly. I liked to meet mountain lions over drinks at the stream. (I’m calling P-22 about happy hour in Griffith Park.)

Some say I belong to the genus Ursus Americanus Californiensis, or “California Black Bear.” Some say my family name, “Bearian,” has roots in Armenia. These facts may be true. But all that I know is that my great-great-great grandbear came to the San Gabriel Mountains in 1933 from Yosemite National Park as part of a group of 11. They’d been expelled from the park after accusations of misbehavior (hamburger rustling, never proven), so they settled new lands, the ursine version of Australia. I suppose I inherited some of their pioneering spirit. That’s how I came upon the buffets of Los Angeles County.

Glendale is a special city, renowned for its food. Each dumpster is a cornucopia. I’ve told my colleagues about it, and if you’ve heard of the Baklava Bear or any of the youngsters who like to bathe in the cool waters of Glendale pools, you know of whom I speak. I should add that they would like you to power up the Jacuzzi, for comfort and variety.

For the most part, the denizens of Glendale have been generous. They leave their streetside food receptacles out in the open and unlocked. Some of them have been so kind as to clean out their indoor refrigerator units days ahead of garbage pickup. In this summer weather, the smell draws me in from miles away like a smoky mist in the shape of a beckoning hand. It has been a welcome guide as I cross the 210 Freeway, guided by my nasal GPS. When commuting, I prefer to take surface.

Likewise, the Department of Fish & Game has treated me well. We have been on a couple of road trips together, including one with a stop at In-N-Out Burger, although I was denied my requested animal fries and a double double double double. And I generally enjoy the media attention. It reminds the public that I am grateful for your food and willing to enjoy it in peace if you just leave me alone and keep the garage well stocked.

I do have some complaints. I am camera shy, and I often have bad hair days, so I don’t appreciate the paparazzi following me with cellphone cameras. Also, overzealous police officers blaring air horns can be unpleasant, causing me to retire early for the day and, worse still, to miss a meal. Most of all, I’m still trying to understand what I recently ate that would cause me to wake up 30 miles away from where I thought I was. But on April 3, 2012 I started keeping a diary on Twitter, and that has helped me track my whereabouts.

Also, I’d like one day to retire in a sanctuary resort, some place where I can play with other bears, swim, and eat baklava and chicken kabobs. I’m told smart people are working on that, although I hope it’s not the same smart people who keep dropping me off far from the buffet. That’s no way to cut down on my commuting time between Glendale and Tujunga.

Glen “Meatball” Bearian is a California black bear and occasional resident of Glendale. His Twitter feed, maintained with the help of Sarah Aujero, can be read here.