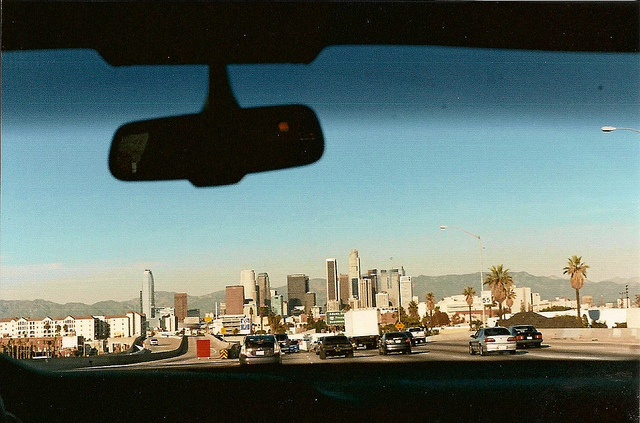 Russell Crowe once said he would move to Los Angeles on three conditions: if New Zealand and Australia were swallowed up by a tidal wave, if there were a bubonic plague in England, and if the continent of Africa disappeared because of a Martian attack. When my English friends ask me why I love L.A., I reel off that quote. “But I thought you liked it there,” they say.

But L.A. is America’s most complicated and polarizing city, and I feel the best way to articulate my attachment to the place is to present an incongruity that mirrors the city’s own idiosyncrasies. Is L.A. Chuck Klosterman’s “bozo-saturated hellhole”? Or the “pretty town” and “sad flower in the sand” of John Fante? Is it a haven and dream factory or what William Faulkner called the “plastic asshole of the world”? Maybe all of these, probably none, but I know it’s those contradictions that draw me.

A month ago, as I waited in Heathrow’s Terminal 1 for my flight to LAX, there was still no sign of the bubonic plague that would force Crowe to Southern California, but I was happy nevertheless to exchange England’s wind-battered shores for L.A.’s plastic grit.

Why would I do such a thing, at this most English of moments, when the world was just about to arrive for the London Olympics?

Well, for one, at the time of my departure in mid-June, The Great British Summer had emphatically delivered on its annual promise of persistent rain punctuated by the occasional 12-minute sunny patch. In contrast, the prospect of sunburned shoulders on Christmas Day seemed like a privilege.

Lawrence Weschler wrote a famous piece for The New Yorker in which he spoke of L.A.’s light, and when I moved here in 2007 as a 16-year-old because of my father’s work, the light was the first thing I noticed. I had braced myself for the enormous trucks, the spider web of freeways, and the industrial-sized portions of food. But I hadn’t anticipated that, as a friend of mine put it recently, in America, even the sky is bigger.

L.A. is permeated by a sense of space and enormity so alien to the British psyche that it awes and appalls at the same time. “I was amazed at the size of the city, and at its lack of shape,” wrote Christopher Isherwood in his earliest diaries after escaping the swelling tides of war in Europe. “There seemed no reason why it should ever stop.”

A quarter of a century later, in 1963, when Bradford artist David Hockney first arrived in L.A., he cycled the full length of Wilshire Boulevard from Santa Monica to Pershing Square, only to discover a ghost town instead of the lively city center he expected. Finally convinced that he needed a car, he bought a Ford Falcon for $1,000 and, after learning to man the wheel for the first time, drove to Las Vegas and back on a whim to conquer his fear of the road. It took him all night.

Isherwood and Hockney, for all that distinguishes them, are of a sort: Anglo-American transplants who found it hard to leave the Southland once they arrived. According to the British Consulate, there are around 200,000 of us in L.A. County. Even after I left California for university in the old Viking town of York in the north of England, it was my intermittent trips back to L.A. that felt like homecomings.

I felt this way even though–or precisely because–Los Angeles is more anti-home than home. The scenery that envelops L.A. is entirely foreign to English instincts. Almost all of Britain’s green beauty, with northern Scotland the notable exception, is a conquered landscape–under control, subservient to its towns and cities. When you are in my hometown of London, it is easy to forget that anything exists beyond its boundaries. L.A., in contrast, holds an unstable and consistently broken truce with the elements, and every fire season it is reminded of its place. “Nature is unfriendly, dangerous, utterly aloof,” said Isherwood in 1940. “However hard I may try, I can’t turn her into a stage set for my private drama. Thank God I can’t.”

Perhaps that’s what thrills Brits like me most about this place. There are cougars in the mountains, coyotes in the hills–animals with names so romantic that they make Los Angeles seem untamable, forever malevolent. Raymond Chandler, another Angeleno raised in England, said that the Santa Ana winds made “meek little wives feel the edge of the carving knife and study their husbands’ necks.” At times the boy in me feels like a cowboy in a frontier town just waiting for the desert to reclaim it.

Much has changed from the city Isherwood knew. The orange groves he so loved have long since disappeared from L.A. life, but in their place a steel orchard of skyscrapers has grown over Bunker Hill. If there is tragedy in the former’s extinction, the rise of the latter has provided a cityscape that ranks amongst the world’s most beautiful. One sight I will never tire of is that of the San Gabriel Mountains, smothered in snow, towering above downtown like a chain of sentinels ready to protect and punish the city in equal measure.

But of course, much of what L.A. presented to its first British settlers has remained the same. The city is still afflicted by a pervasive atmosphere of disrepair and decrepitude; it has, according to everybody, been falling apart since 1781. This is a city superimposed on the desert, perpetually losing its Sisyphean battle with the dust and sun. But for the Brits who have always loved this sickly corner of the Golden State there is honor in the absurdity of the attempt, the hopelessness of the cause.

Earlier this month, my university friends and peers in York donned their caps and gowns to celebrate graduation. Because of the Olympics and temporarily hiked flight prices in July, I left early and couldn’t attend the ceremony. It’s a shame, and I will miss England, but when my family greeted me at LAX and the place was heaving with the day’s heat, I knew my post-college life was beginning where it should.

When we reached the onramp that merges the 105 with the 110 and those familiar mountains came into view, I shed the vestiges of my airport stress, stretched my legs as far as the car allowed, and relaxed. At that point, I was hardly bothered by the traffic. It was part of the ritual, the communion; an interval in which to disparage or extol the slew of films I had watched on the plane’s miniature screen. It’s been five years since I first made that journey from London to LAX. I am no longer an exile in Los Angeles, this sad flower in the sand, this pretty town.

Cameron Lange is an intern at Zócalo Public Square.