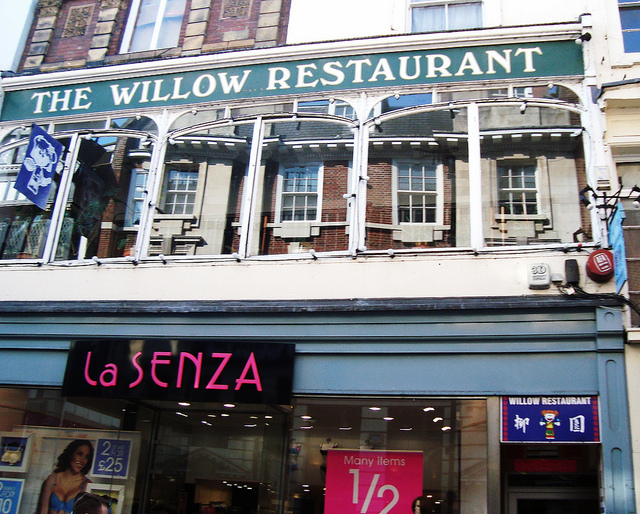 “I’m convinced nobody actually likes clubs,” wrote Charlie Brooker in one of his brilliant rants for The Guardian. “Why not just stay at home punching yourself in the face? Invite a few friends round and make a night of it. It’ll be more fun than a club.”

I’ve always agreed with Brooker, and never more so than when I started college in England. The appeal of spending money I didn’t have with friends I couldn’t hear in a stuffy, deafening room was lost on me. Of course, that had a lot to do with my astonishing ability to dance in a way that provokes screams of horror from onlookers. In some countries, my dancing is a form of torture.

But nights at The Willow were different.

First of all, it was never supposed to be a club. Oddly placed above a clothing store in the medieval town of York, it was originally a Chinese buffet. With neither terrible nor spectacular reviews, the place went largely unnoticed, but in what would later prove a moment of unwitting genius–the exact date of which is shrouded in student myth–the owners decided to clear the tables after dark and invite their customers to dance.

It started innocently; they sold shots for £1, played their favorite songs, and made a little extra cash. But rumors of The Willow’s extracurricular activities leaked around town, and eventually the restaurant’s late-night experiment grew so popular that it began to supersede its regular business, resulting in its food license being revoked altogether over hygiene fears. The Willow was forced to survive thereafter only as a club, but over the years it has done much more than survive. By 2009, it had become so successful and generated such local lore that a student at the University of York wore his Willow t-shirt to climb Mount Kilimanjaro.

These days, students are willing to brave the line for upwards of an hour on soggy Yorkshire nights for the chance to scale the club’s narrow, booze-soaked steps. The Willow craze is hard to understand. A small, unremarkable room with cheesy lights and a four-foot bar, it is, by all sane accounts, a horrible place. But from 2 a.m. on, the club abdicates its fragile place in reality and descends into delirium, mad with tequila fever.

Don’t be surprised if parts of the crowd start whirling like Sufi dervishes to the cha-cha slide, or a spontaneous dance-off erupts to the “Grease” soundtrack, or a rugby player clad in nothing but a ballerina tutu tries to headbutt you in the nose (or buy drinks for your entire group). Welcome to The Willow, the greatest Chinese restaurant on earth. Take it easy, have another shot.

Dangerously cheap drinks aside, the force perpetuating the club’s absurd atmosphere is the music. At The Willow, if you ask for Funkadelic’s “The Electric Spanking of War Babies,” they’ll probably play it. All eight minutes and 41 seconds of it. If somebody else requests “(What a) Wonderful World” by Sam Cooke followed by N.W.A’s “Fuck tha Police,” they’ll play that too. This psychotic jumble of genres and themes goes on every night until 4 a.m.

Once, at the peak of the night’s lunacy, the whole club started a conga line to “Stop! In the Name of Love” by The Supremes, certain that Diana Ross would approve. Trying to cater to the strange whim of the crowd, the D.J. followed up with Gloria Estefan’s conga classic, only for the uncooperative mass of wobbly bodies to move on, as if bored, to something else.

The scene is made all the more surreal by the presence of bar staff gliding from corner to corner with the sole role of providing the room with copious amounts of prawn crackers. These are dropped all over the floor, and thus a walk to the bar is always a crunchy affair, much like a genocide of baby snails.

At times, The Willow can push its patrons over the edge, morphing into an arena of torment where sweaty students dance out of time and sing out of tune with prawn crackers stuck between their teeth. On most nights, half the room has been purged of the ability to walk in a straight line, creating the illusion of a permanent earthquake. It reminds me of being a teenager at Six Flags and the moment when, after your fifth go on The Riddler’s Revenge, the ride stops being fun and becomes utterly, irreversibly nauseating.

Why, then, did I go back time after time? Why did I submit my body and mind to such abuse? Why did I dance the conga to The Supremes?

Nobody will ever know.

But if hell is a lawless karaoke contest where everyone sings on stage at the same time, wailing the toneless words to “Wonderwall,” I want to go. The Willow is an endearing mess, and even if it didn’t quite convert me to nightclubs, within its demented walls I discovered the joy of being an unreserved fool in the company of equally idiotic friends.

Cameron Lange is an intern at Zócalo Public Square.