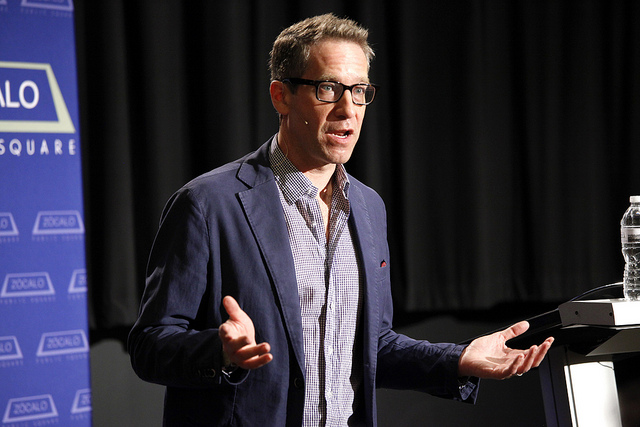 Why do Angelenos spend $16 for a ticket to the ArcLight cinema to see a movie they can download for free? Why does the Kogi truck keep making money on fusion tacos even though imitations have sprung up all across town? And, why do high-end fashion designers keep profiting even after Forever 21 produces knockoffs of their top outfits?

According to UCLA legal scholar Kal Raustiala, coauthor of The Knockoff Economy: How Imitation Sparks Innovation, these are all examples of how copycats and imitators–legal and illegal–not only fail to hurt creative industries but sometimes help drive them. In a talk at the Goethe Institut Los Angeles, Raustiala explained why a lot of what we think we know about intellectual property is wrong, and how certain industries–like fashion and food–still manage to thrive despite a lack of copyright protection.

“People in this town are very concerned that the lack of respect for intellectual property rights here and abroad is undermining their business model,” said Raustiala, pointing to the film and music industries’ concerns about pirating and lobbying–from the days of Mickey Mouse to more recent battles over the SOPA and PIPA legislation.

Yet in the fashion industry, a dress design moves in a matter of months from the runway and the red carpet to websites like Faviana that traffic in imitations and stores like Forever 21 and H&M–and designers keep raking in profits and inventing new looks with each season. 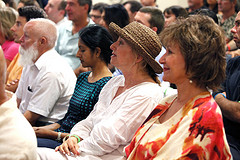 “Doesn’t that suggest there is something wrong with the way we’ve thought about the relationship between copying and creativity?” said Raustiala.

Unlike music, film, and poetry–media that are creative in nature and not functional–fashion designs are considered functional and do not fall under copyright laws. They can fall under design patent protection, but patents are expensive and take a long time to get–whereas fashion is cheap and cycles quickly.

The freedom to copy, said Raustiala, actually makes that fashion cycle turn faster. A certain design comes out on the runway and becomes a hit, spawning copies in lower end stores. People on the streets see that look everywhere, it hits a saturation point–and then they tire of it. Designers, in turn, are forced to come up with the next hot look. “Trends are central to fashion, and copying is central to trends,” said Raustiala.

The food industry, like the fashion industry, isn’t protected by copyright law because it’s considered functional. So why do chefs–like Kogi’s Roy Choi, whose Korean tacos are now ubiquitous–keep innovating? The food industry also experiences trends like small plates and bacon. But what drives creativity in the kitchen is the way that chefs tweak the dishes of their colleagues, improving a dish incrementally and also creating more competition. Once everyone is making Korean tacos, Kogi has to create new dishes to set itself apart–and maintain a certain level of quality. The ability to copy has a democratizing effect as well, said Raustiala, because it creates a set of versions in the marketplace. The molten chocolate cake was once the provenance of four-star restaurants, but now it can be enjoyed even at Chili’s. 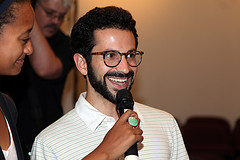 We tend to think that granting a monopoly fosters creativity–but as the food industry demonstrates, competition “is not at odds with creativity, and imitation is not at odds with innovation,” said Raustiala. In this field and others, it’s better for the legal system to stay uninvolved.

So what lessons can we draw from industries that are covered by copyright?

Record companies have made a lot of noise about how much the music industry has suffered over the past decade or two. But Raustiala believes that if you look beyond sales of records, you’ll see a more nuanced story. Today, we can buy a greater variety of music than ever before–and Raustiala believes that music today is as good as it was 10 or 20 years ago. So from a consumer perspective, the industry has improved. And even if record labels are losing money, musicians are able to create and distribute their work independently as never before, thanks to new technology.

Hollywood is also worried about what piracy will do to its business. But, said Raustiala, Hollywood also worried in the 1980s about the VCR–which ultimately made the industry tons of money.

In the question-and-answer session, audience members asked Raustiala to talk more about the economics of copyright law.

Raustiala was unequivocal in his opposition to the Sonny Bono Copyright Extension Act, which he called “a bad thing” and “a naked money grab.” The standard of protecting copyright for well over a century, he said, is too long. But when there’s money to be had, the people or corporations who hold a copyright will push as hard as they can to keep it–and they usually have more power and more money than their opponents. (One notable exception: Silicon Valley challenging Hollywood on SOPA and PIPA.)

The last question came from an audience member who had looked up Raustiala’s book on a BitTorrent website and found that a pirated version was available. Is Raustiala upset, and does he think a digital business model that can sustain intellectual property exists? 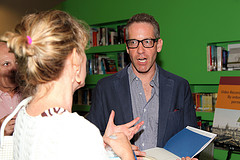 Raustiala thinks it’s good that his book is available for an illegal download. “I think copies are often fantastic advertisements,” he said. And even if some people download the book illegally, “as long as you price things well, and iTunes illustrates this beautifully, people will go with the legal version.”

Piracy and copying also encourages creators to turn their product into a performance. Musicians now make most of their money from touring. Even though Thomas Keller’s recipes can be found in a book, people pay top dollar for the experience of dining at the French Laundry. And the ArcLight is still crowded most of the time despite its high ticket prices–because it feels special with the theater’s guaranteed, comfortable seats and drinks and food for sale.

We may not understand exactly how copying and creativity go together, concluded Raustiala, but they do go together–and in a more nuanced way than our legal system would have us believe.

Watch full video here.
See more photos here.
Read an essay by Raustiala on the fashion industry here.
Read opinions from creative minds in different fields on when it’s OK to steal an idea here.
Read an excerpt from The Knockoff Economy here. 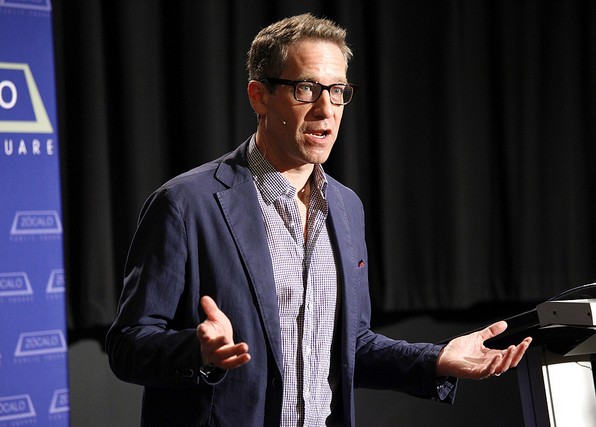