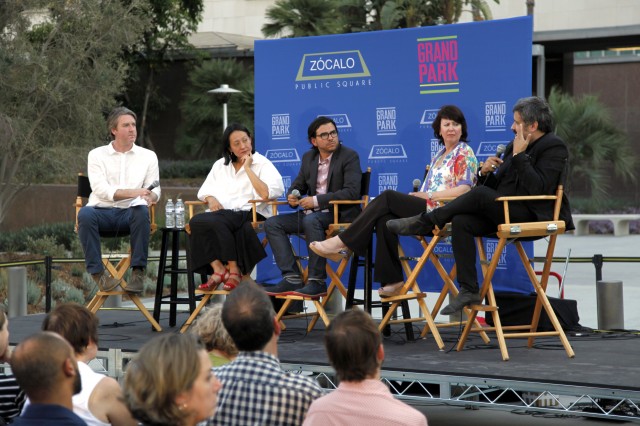 Will downtown L.A. ever work? It’s already working, said a four-person panel of architects, planners, and designers who’ve been closely involved with downtown over the past decade. At an event in partnership with the Music Center at Grand Park–one of downtown’s newest public spaces–the panelists spoke with the evening’s moderator, Los Angeles Times architecture critic Christopher Hawthorne, about why they feel downtown has at last arrived and what the future might hold.

Hawthorne recalled arriving at the Times in 2004 and feeling like downtown was effectively empty; it was hard, he said, to find a cup of coffee after 5 or 6 p.m. Today, “we’re in the midst of a real revival that has sort of reached a real tipping point in terms of residential population,” said Hawthorne. At the same time, the recession has stalled a number of projects, leaving downtown “in something of an interesting position at the moment.”

How, he asked the panelists, have your experiences and perspectives on downtown changed in the past few years?

Landscape architect Tony Paradowski of Rios Clementi Hale Studios, who spent nearly seven years working on Grand Park, said that at the first meetings with locals, people were “just interested to see something happening with this space–anything, really.” But as time progressed, he saw people realizing that the park was theirs. At the first community meeting, only one person wanted to see a dog park in the space. By the end of the process, there were more people and more dogs in the area, and a dog park was incorporated into the design. 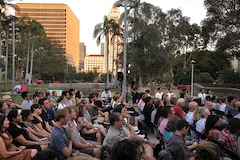 Architect Hernan Diaz Alonso, principal and founder of L.A.-based design practice Xefirotarch and graduate programs chair at SCI-Arc, first saw downtown Los Angeles in the early 1980s, when he was living in Argentina, on the screen in Blade Runner. “I’m disappointed because it’s becoming this clean and civilized place!” he said. He moved downtown in 2001 and touted its diversity and complexity; he loves raising a family in the area, he said. His biggest hope for downtown is that it gets denser–three or four times as dense as it is now–without losing its character. And with a young daughter at home and another child on the way, he’d like to see more schools in the area. Schools, he said, could become catalysts for all sorts of other changes, particular in the empty pockets of downtown between more developed neighborhoods.

Melani Smith, who directs planning and urban design at downtown L.A.-based Meléndrez, thinks the next challenge is connecting the different neighborhoods of downtown and making circulation among them easier. She’d hoped for an easy trip from her offices at the Oviatt building, just under a mile away to Grand Park via DASH, but had to wait 20 minutes for the bus to arrive. She believes the streetcar has the potential to make transportation easier all around downtown.

Hawthorne asked the panelists about certain neighborhoods, like Bunker Hill, that still aren’t working. Grand Avenue, he said, has not succeeded as its planners had hoped, despite grand buildings by “a murderers’ row of architects.”

Smith said that the width of Grand Avenue remains a barrier, while Paradowski said that the street lacks a sense of scale because it takes so long to walk from one institution to the next, and because so many potential public spaces remain closed off.

Panelists pointed to financial, political, and policy stumbling blocks that are keeping downtown less pedestrian-friendly. But they agreed that the Department of Transportation today is more open than ever before to making downtown a place not just for cars but also for people on foot, bicycle, and public transportation. Smith, who is working on the Figueroa Corridor Streetscape Project, linking south Los Angeles to downtown, said that the DOT has been a great ally in the effort to build what will soon be L.A.’s first separated bicycle lanes. 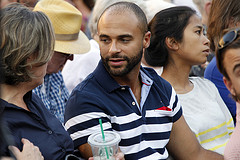 Architect Alice Kimm of John Friedman Alice Kimm Architects said that, in designing public projects, architects have to satisfy multiple constituencies, some of whom are less aware of the value of good design. “There are many bad examples of design out there that to the public will fulfill a certain function, but that doesn’t make it a great design,” she said. But in the past decade she feels downtown residents have become more interested in ambitious architecture and design.

In the question-and-answer session, audience members and the panelists discussed supermarkets, gentrification, the possibility of a new football stadium, and the activation of expensive public spaces like Grand Park.

The panelists said that supermarkets are a necessity as well as a safe bet, pointing to the success of the Ralphs that opened in 2007. It has the highest-grossing service deli in the chain, according to Smith.

How, asked another audience member, is downtown going to grow around or through skid row–and how will skid row integrate with the rest of downtown?

“I don’t see it go away or see us wanting it to go away,” said Kimm, who works nearby and who believes that the services offered in skid row are a necessity. But, she said, downtown workers and residents also need the area to feel safe.

Will a new football stadium change the character of downtown or the culture of its residents?

Diaz Alonso said that he is an advocate of the stadium–and even of the traffic it will bring. “I think a high-density traffic jam creates different opportunities,” he said. People who come to a game may stay downtown for two or three hours after the game ends to avoid traffic; others will find alternate means of transportation. However, he could see problems arising if the city builds a suburban-model stadium–with huge parking lots surrounding it. 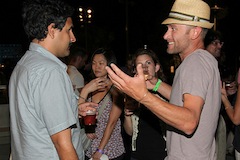 Smith, who participated in a recent public debate at the planning commission–which approved the project to the next step–assured him and the audience that the stadium will be an urban one, and it will be an opportunity for downtown to activate new public spaces like the Gilbert Lindsay Plaza, nearly four unused acres in front of the convention center at Figueroa and Pico.

So how can downtown activate spaces like the plaza–and Grand Park?

Paradowski said that park designers knew they’d have to rely on programming to get people in for the first time. “We kept the design simple to provide spaces that sometimes seem empty but other times like tonight are full,” he said. And, he said, addressing the audience, if you came here for the first time tonight, maybe you’ll come back.

Hawthorne surveyed the audience: Who had come to the park for the first time tonight? About half the people in the large crowd raised their hands.

Watch full video here.
See more photos here.
Read Angelenos’ opinions on what it would take for L.A. to have a world-class downtown here. 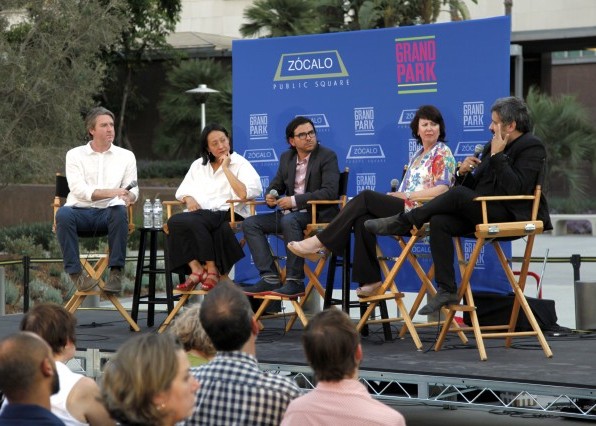