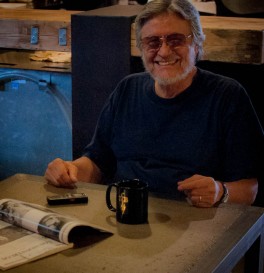 When Alberto “Beto” Escoto was 5 years old in Guadalajara, he would tap the kitchen tabletop in rhythm with the military band marching down the street. A fork and spoon turned out to be the perfect makeshift drumsticks. The weight of a spoon dropping against a wooden surface made a “THWACK.” The metal fork slapped against a pot of beans with a “DINK.”

“I was born to play the drums,” Beto tells me amid the steam screaming from the espresso machines at Cartel’s in Tempe, Arizona. In between sips of tea, he smiles immensely, gesticulating, dropping his fingers, lifting the digits, and then dropping them again and again against the table’s surface to, of all songs, The Notorious B.I.G.’s “Juicy,” which is blasting from the speakers somewhere overhead.

“I can play rhythm and blues too,” he says, “but I prefer funk.”

I’ve met Beto to learn the story of a Mexican musical legend, a man who made his living banging drums for 50 years, and how he ended up here. He does not disappoint. He begins by describing how he was influenced early on by drummer David Garibaldi of Tower of Power. “Garibaldi is one of the best drummers of funk music. Exactly what he was doing with his right and his left hand I listened to the record and learned.”

When I asked Alberto about other musicians in his family, he told me there were none. Alberto’s father was a jeweler. His mother helped his grandmother, a glass blower, make vidrio soplado—colorful glass bowls and cups. (The phrase sounds nicer in Spanish). His parents were artists in their own right. For Alberto, the rhythms life created sent him down his own path.

Behind tinted glasses, the smile in his eyes reveals more than words about his love of music: a gratitude toward the thing that saved his life.

“When I was 15 years old, I used to get drunk, lie on the street unable to walk, throwing up and everything. The drums kept me away. I didn’t even think of a drink. When on the other hand, many musicians, they wanna play so that can they drink, so they could do drugs. Not me. That helped me stay away.”

Beto formed the group, Los Monstruos when he was just 18. “We got together playing Beatles songs. Top 40,” he says. They played in local cafes and eventually were asked to appear on a local Guadalajara TV show called Muevanse Todos. “We were doing the most popular songs, but in English. Not in Spanish because rock and roll was played in English.”

In 1964, after recording an album with the label Son-Art, Beto moved to Tijuana. If you were a band trying to make it, Tijuana was the place to be. “In Tijuana a band could play every day because there were, there still are, many nightclubs with live musicians playing like in New Orleans or like in San Francisco” for locals and for tourists.

Tijuana was a place to party, especially for those considered under-aged in the U.S. There could be 150 musicians on one street. “Calle Revolución,” Beto recalls. “If someone wanted to beat up one of the musicians, all the musicians would come out. We used to take care of each other. Keep each other away from drugs, take ’em to the doctor. With all the bands. We didn’t envy each other. We were friends in the same business.”

In Tijuana, Beto’s band started playing backup covers to songs written by artists like James Brown and Chubby Checker. He loved the work but it paid only $6 a day. That was just enough, he tells me, to eat or pay for a room.

But Beto survived the hard times, stuck to his passion of playing, and eventually was asked to play for and tour with the Five Fingers. They went everywhere, he says. Canada, Hawaii, all over the U.S.

Over 40 years, he played in about 90 different bands. One of those bands was Los Dug Dugs. Los Dug Dugs made rock ’n’ roll history when they played at the Festival Rock y Ruedas de Avándaro. “Avándaro,” as it is known for short, took place in 1971 and was Mexico’s equivalent to Woodstock. Beto is modest in his telling of this fact, but I can’t help from thinking to myself that I’m in the presence of a legend.

Beto still holds fond memories of his life on the road. He says that every band he played with would pack the house. But after all these years, Alberto still wishes his father would have told him, “I will let you play, but if you don’t study, there’s no drums.” He appears, at times, to be apologetic for having been a musician instead of something else.

It should be noted that he is other things too: a husband, a father, and a grandfather. And four years ago, he retired as a musician and decided to do something about his education. He is now a student of criminal justice at Mesa Community College. His new passion is school.

I surprised him by asking about a song he recorded when he was with his first band, Los Monstruos. “Hey Monstruo,” recorded roughly 50 years ago, was recently featured in HBO’s series Eastbound and Down. Beto was floored. He had no idea that the song had new life. When he recorded his first album, he said, he didn’t retain his rights to any royalties; he was cheated, he says.

The money part doesn’t bother him, he adds. He was just stoked to be playing music and amazed that his music lives on—his eyes widening and then filling with humility. “It’s such a simple song.”

I can’t help but be jealous of the life he’s lived. He allowed his life to be led by dreams. No coward can live this way. Although Alberto hasn’t played with a band in long time, he still drums. That just something that doesn’t go away.