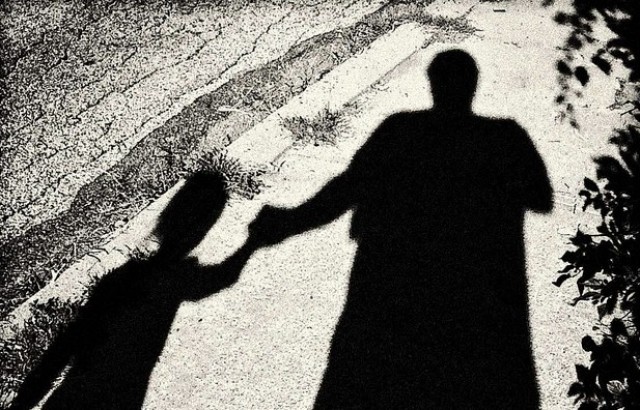 “Are you gay?” my 12-year-old self asked, as if asking about the weather.

We had stopped in the deli section of a supermarket near my father’s home in metro Detroit to pick out some meat for a party. Dad must have said something, done something, that pricked my subconscious.

My father gave me a look of pure astonishment. “We’ll talk about it later,” he finally said.

The year was 2004, the month November, that dreary time when Michigan can’t decide whether to clothe itself with leaves or snow. We were both about to have a rough night.

I had never considered my father’s sexual orientation before. As a seventh grader, I was more concerned with school and acne and the cute boy in my English class. And Dad had always been a man’s man. He once drove from Detroit to Chicago overnight to buy a 1966 Chevy Corvair that he named Veronica. He spent years rebuilding our house, immersing himself in everything from electrical wiring to tile flooring. He dressed smartly but not fashionably, and his favorite store was Home Depot, which we visited multiple times a week.

So I had no basis to ask the question I did. It was only six months since I’d even understood the word “gay.” But somehow, I knew.

Later that night, my father, sitting on his bed, revealed his secret to me. “So you are gay?” I asked. “Yes,” he answered. The rest was a blur. I screamed at him and sobbed. I wanted to know how I would be affected by this change. Was homosexuality genetic? Did this mean I had to be gay, too? I was too hysterical to consider his feelings. I found out later that my sister, age 9, had heard my crying through the thin walls that separated her bedroom from my father’s. She knew everything. I regret that she had to find out so soon, overheard instead of explained.

My parents had divorced five years earlier, when I was 7. “Irreconcilable differences” was the legal cause, as it is for so many other couples, and it described my parents perfectly. Dad was the extrovert who worked long hours and surprised us with gifts and vacations. Mom was the introvert who preferred immersing herself in the beauty of nature and spending time with friends and family. They’d gotten engaged only three months after meeting each other. They’d also gotten divorced, after almost 12 years of marriage, before he realized he had a preference for men.

After coming out to me, Dad made an appointment with Mom to tell her, too. I don’t know how she reacted; her main concern was for my sister and me. In April 2005, Dad finally told my sister he had a partner. She had found a pair of unfamiliar shoes in his closet.

The first time I’d met this partner, I didn’t know my father was gay. Dad had taken me to an arts-and-crafts show to say hi to some friends and introduced me to one of them, a tall guy in his 20s with bleached-blond hair and a high voice. He was selling candles. I smiled and nodded, but this wasn’t my scene, and I didn’t think anything of it.

A few weeks after my dad’s conversation with my sister, Dad reintroduced his partner to us during a Sunday brunch. This man, 16 years younger than my father, was our stepfather now, Dad said. And he’d be a big part of our lives, joining us on our annual camping weekends at Cedar Point amusement park and our 10-day summer vacation. Dad said his partner would be moving in with him in the fall, but we soon found out that the partner had already moved in.

I threw tantrums; my sister retreated into herself. My mother told my father he had to give his daughters time to adjust and understand before they could process having a new stepparent. Dad interpreted our reactions as homophobia and suspended our fortnightly weekend stays with him.

Meanwhile, insomnia took hold of me, and I would stare at the ceiling as minutes turned into hours, my thoughts wrestling in the darkness. Would my life ever be normal? Where had my father gone, and who had given him this new identity? My sister—normally a chatterbox—had gone mostly silent, speaking only to communicate basic needs. After a few months of unsuccessful sporadic day visits working to rebuild his relationship with his daughters, Dad felt he had waited long enough. He wanted to live his life in daylight, and he wanted to resume our regular visitation schedule. That December, he took my mother to court.

One requirement of the court was that my sister and I attend therapy sessions. In my memory, our therapist is the mirror image of Professor Trelawney, Harry Potter’s divination teacher as played by Emma Thompson. Her hair wasn’t as frizzy, and her woolens were less threadbare, but she had the same dazed, helpless look about her—as if a storm were coming, and she could do nothing but wait for it. She would start each weekly session with mundane questions about school and life and then move on to Dad-related drama. I worked my way through Kleenex boxes, crying in anger.

I didn’t like that Dad was gay, but that wasn’t my main concern anymore. It was that I never felt as if he listened or tried to understand. Sometimes, in an obvious plea for conversation with him, I’d lock myself in my small square room at his house, emailing and messaging friends on my computer. Dad would turn off the electrical breaker, forcing me to open the door and giving me the opportunity I wanted to talk. Yet I always ended up screaming at him instead, trying to break through his calm and patronizing answers. I wanted him to be as angry as I was or, at least, to feel something.

Looking back, I’m sure he did feel something. I imagine that all the fears he felt of being rejected by his own family were turning into reality, and he was furious about it. But it was also causing him to lose sight of what to expect from ordinary people, and especially kids, confronted by major change. Even a new woman in Dad’s life would have been hard on us, let alone a new man.

Dad’s efforts to place his partner in more of a parenting role just made things worse. If I wanted to see a movie, or make some food, Dad would tell me to ask my “stepfather” for permission. But only Dad was my dad. This new person, who listened to techno and swore at me when I made salads in a way he was not accustomed to, was not my dad, or stepdad, or even someone I could think of as a credible authority figure.

I was desperate for Dad to convey that he was fundamentally the same man I’d known and loved and to whom I’d been so close in both appearance and manner. Instead, the changes in his personality and behavior grew more pronounced. When I was younger, Dad took us to Episcopal Church services every Sunday morning and even taught Sunday school. After Dad’s coming out, his religion became invisible. Home furnishings began to consume more of his budget. My father was never one to skimp on a product that could last a long time if chosen wisely (we still have his now 20-year-old stereo), but he never took much interest in feng shui or vases full of marbles. That had started to change. One day, I noticed that the two sconces on the living room wall had undergone a transformation. Previously their lampshades had been an unremarkable gray. Now they were hunter green, with gold beads dangling from the sides. It may seem like a trivial change, but I found it horrifying and burst into tears. Who was this man with frilly, beaded lampshades?

The constant emotional tension and financial strain was taking a toll on all of us. We were drained of will and tired of fighting. Eventually, we stopped trying to put the brakes on my father and surrendered to his wishes. My sister and I visited him every other weekend, at least until my senior year, when I had a weekend job at the library, which gave me an excuse to stay home with Mom.

Gradually, I grew more comfortable with the change in Dad and even told certain confidantes, usually in an exchange of secrets—one friend’s dad was a pothead, another had cut himself amid severe depression. Mutually assured destruction gave me a sense of security and comfort in what was a small, conservative, upper-middle class town.

After high school, I ran off to the East Coast for college, creating some distance for me to start anew. My sister pasted on a smile and forged a new relationship with my father and his partner. She’s now a senior in high school, and I’m a junior in college. All of my friends in college know about my dad, and I no longer have a teenage need to conform.

Because my dad became gay so late in life, I’m sometimes asked if I think homosexuals are born gay or lesbian, or if it’s something they become over time. I don’t know, but I don’t think it matters, either. Attraction is not something people can choose or control. It chooses them, not the other way around. I’m happy that my dad has found happiness and love.

But I do wish he had introduced his new life more sensitively. I wish he hadn’t thrown accusations at my mom for trying to protect her children. I wish he had tried to explain to us that our own identities wouldn’t change just because his did. And I wish he had tried, despite my frustrating insolence and anger, to see things through his children’s eyes.

Coming out stories so often seem to fall into simple categories. Either everyone accepts the person who comes out and there’s a group hug, or family members reject the person and cut off all contact. But I think stories like mine are far more common. Anytime someone comes out, it’s going to be hard. It’s even harder when children are involved. I don’t think my dad handled things right, but I also don’t think there was a “right” way to handle it. There were just bad and less-bad options.

Today, rainbow is supposed to be the new black, and I’m happy about that. If society had been this enlightened when my dad was young, maybe he would have become aware of his latent feelings sooner. I like to think that the next generation of Americans will feel less tortured about their sexuality, so that, unlike my father, they’ll take the right path to start with, instead of painfully changing course.