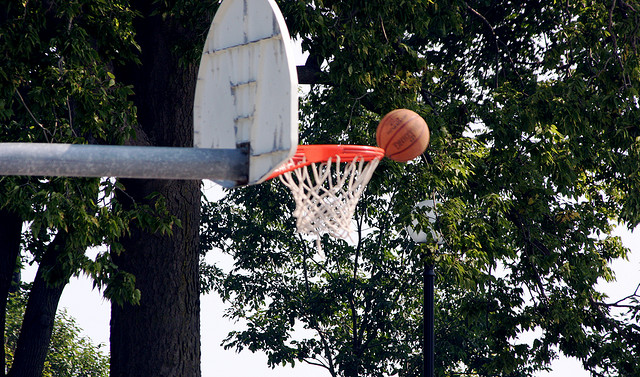 A few years ago, I moved to Westlake, a ridiculously high-density, low-income neighborhood just west of downtown Los Angeles. It’s home to one of the city’s largest Central American communities (when you’re broke here, you eat pupusas, not tacos), and a quick look at an L.A. Times crime map will tell you it’s also one of the most crime-ridden neighborhoods in the city. Still, the grittiness of the area quickly grew on me. I liked that it wasn’t as trendy as downtown, as charming as Venice, or as garish as Hollywood. And, although we were close to Silver Lake and Echo Park, few meandering hipsters from those neighborhoods dared venture south of Santa Monica Boulevard. We were many ordinary people living in the heart one of the world’s greatest cities.

I figured that one way to learn about the neighborhood would be to play pickup games at Lafayette Park, near Hoover and Wilshire. If you play enough pickup basketball, you know that the courts are used for more than just sports. They’re an informal media platform, a forum for the exchange of gossip and tidbits of local news. Twitter on blacktop. If you’re paying attention while you play, you get a neighborhood snapshot infinitely more detailed than any community map.

For two years, I played pickup ball several times a week with the neighborhood’s gang members, junkies, streetballers, and day laborers. After that, I left town to travel for a year. Then, during the last week of October, when I found myself back in town for a visit, I went back to the courts. Somehow, my return to Los Angeles wouldn’t feel complete until I’d played a game at the park.

In the week prior, there had been six robberies, four stolen cars, three assaults and one rape in a one-mile radius around Lafayette Park—a typical seven-day stretch. When I arrived, the park was unusually empty, except for a soccer game on an adjacent field and a quiet pickup game on one of the courts. The lights illuminating the court were very white and very bright, like floodlights.

“Pop” was standing off to the side of one game. Pop is an old, chatty, reliably tipsy park mainstay who never has a shortage of things to say or people to say them to. He can’t shoot, dribble, run, or jump, and he rarely plays, but night after night he stands on the side of the court, beer in hand, talking shit and heaping praise on anyone within earshot. I walked by him as he angrily told a group of people a story about an encounter with local police officers. “I’m black and my wife’s Mexican,” Pop said. “They stopped me, just trying to find something.”

A basketball court and its players usually match, like a shirt and tie. A good indoor court has well-conditioned guys in nice headbands and new sneakers. Lafayette Park, where the courts are covered with a layer of dust and some of the nets have been ripped from the rims, has many small and scruffy young men playing in off-brand shoes. Some guys play in jeans.

A couple of players looked familiar, and we nodded and bumped fists. That was as sentimental as it got. I asked one of the guys to play with me. “I don’t know, dog,” he said, shaking his head. “Already played three games. I smoke too much.” That’s code for “I’ll play, but don’t get mad when I don’t play any defense or miss open shots.” He walked to a water fountain for a drink and jogged back onto the court.

What separates basketball from swimming or hiking or concerts is the type of bond it creates among strangers. We started the game in a zone defense, which is unusual for pickup basketball, because it requires a high level of cooperation between players. Each of us had to defend a piece of the court, and if we worked together, we’d be able to hide our team’s shortcomings, which included a lack of strength, size, speed, and athletic ability.

But the opposing team had a massive Korean guy with an unstoppable hook shot. None of us could guard him individually, so we ditched the zone and each took turns slapping his arms, grabbing his shirt, and harassing him with as much violence as we could reasonably use. In any other forum, this might lead to a fight. In pickup basketball, it’s an accepted defensive strategy.

Mike Deland, a Ph.D. candidate in sociology at UCLA who studies pickup basketball games, calls them “micro-legal interactions.” By doing things like “working out the rules,” “establishing precedence for future calls,” and “negotiating the line between what’s acceptable and what’s not,” the players in the game establish durable frameworks. Since we collectively interpret and enforce the rules, everyone honors them.

“It’s not just playing around,” Mike says. “There’s nothing material riding on it, but it’s not just play.” In all my games of basketball at Lafayette Park, I’ve never seen a fight on the court.

When you move to a new neighborhood, you eventually find that the place you’re living in stops being just the place you’re living in. It becomes home. You no longer feel new or awkward; you know where to eat, which streets to walk down, and where to buy cheap beer. When I was living in L.A., I’d listen to all the news stories about how awful and dangerous my neighborhood was and become an apologist: It’s really not the war zone people make it out to be.

Pickup basketball was part of that. Walking through the neighborhood, I’d see other pickup players hanging out on the corners or in the parks, and we’d give each other half-nods, almost as if we were in on a secret. I belonged. It was my community too.

My return to Lafayette Park lasted a couple of games. None of us were very good, and there weren’t enough people to form fresh teams, so the games turned into ragged, flailing things that only faintly resembled basketball. But when I drove by the park a few hours later, around midnight, there was still a group of guys there, playing hard under the hard lights, as though the game were more than just a game.