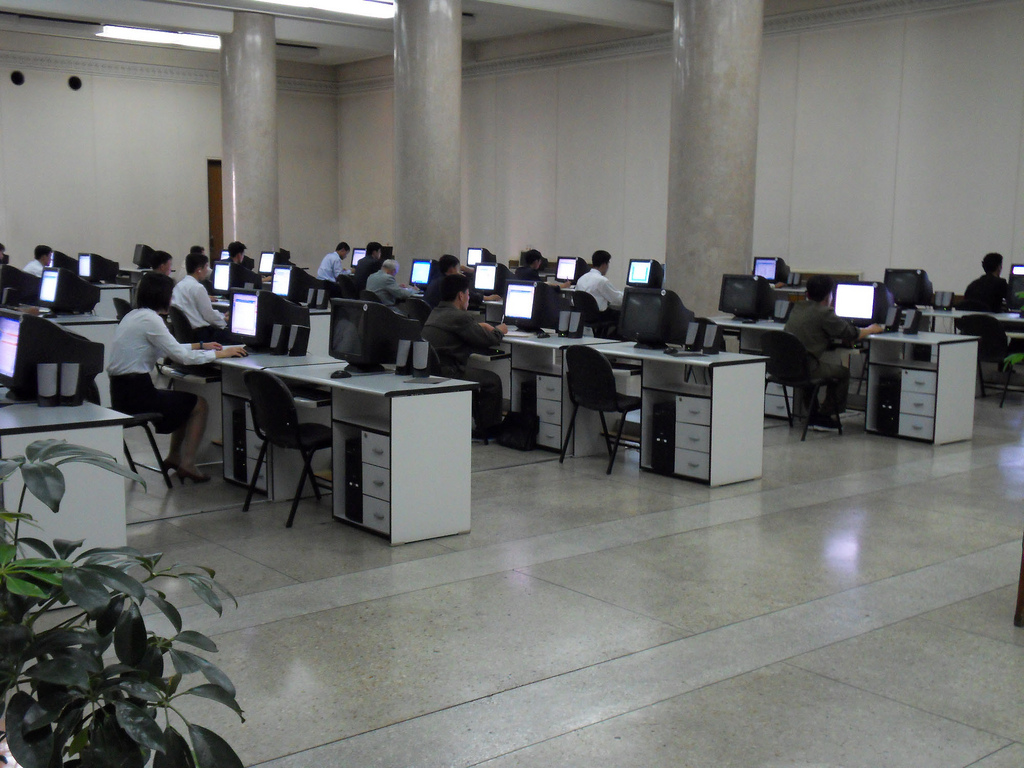 On Monday, Google Chairman Eric Schmidt arrived in North Korea, a country that is almost completely cut off from the Internet. Schmidt, who is traveling with former New Mexico Governor Bill Richardson, is part of what has been termed a private humanitarian mission. The State Department has nonetheless expressed dissatisfaction, saying that the timing of the visit is not “particularly helpful.”

Is there ever an optimal time to visit North Korea? It is true, however, that in recent months Pyongyang has been particularly belligerent. Last month, North Korea detained Kenneth Bae, a naturalized American citizen who was born in Seoul, for unspecified “hostile acts against the republic.” Further complicating matters is North Korea’s launch of a long-range rocket, which the United States viewed as an attempt to develop a ballistic missile.

But if the timing is bad for traditional diplomacy, then what about digital diplomacy? Digital diplomacy entails leveraging new connection technologies to shape international relations. The beauty of this concept is that it doesn’t have to be strictly between one government and another. It can be conducted by technology companies, NGOs, or even ordinary citizens. A visit to North Korea by the chairman of Google, even in his “private” capacity, seems to fall into this category. The trip might even indirectly further one of the State Department’s key goals, which is to promote the “freedom to connect.”

The goals and details of Schmidt’s visit remain unclear. Richardson has said that the delegation plans to visit universities and meet with political, economic, and military leaders. Most likely the trip’s value will be largely symbolic—attempts to do business could violate U.S. sanctions. Nor is North Korea, a country in which many workers make less than $1 a month, the most alluring consumer market. What Google would bring to North Korea is the lure of information technology, which the Hermit Kingdom will find increasingly hard to reject. And there is no country more threatened by the Internet than North Korea.

North Korea is facing an extreme version of the dictator’s dilemma. On the one hand, its leaders are attracted to the knowledge, economic growth, and global connectivity that are facilitated by the Internet. At the same time, they know that the Internet would threaten their grip on power. Most regimes facing this quandary have chosen to embrace technology, even with the corresponding loss of control. North Korea is likely to do the same. The difference is that it might not survive the consequences.

North Korean leaders have long viewed technological prowess as a source of government legitimacy. The recent satellite launch, for example, can be pointed to as a symbol of regime “accomplishment.” “Technology is one of the bumper stickers for revolution, making progress,” says Scott Snyder, a North Korea expert at the Council on Foreign Relations. Even as much of the country remains hungry and reliant on foreign aid, the regime still strives for the gloss of modernity—as with the large digital screen in front of the Pyongyang train station. It would be just like the screen in Times Square, except the Pyongyang version shows North Korean propaganda. In his recent New Year’s greeting, the young North Korean leader Kim Jong-un extolled the benefits of technology, saying: “The industrial revolution in the new century is, in essence, a scientific and technological revolution, and breaking through the cutting edge is a shortcut to the building of an economic giant.”

Even Kim must realize that it’s pretty hard to be “cutting edge” if you have no access to the Internet. And yet, that is the case for nearly all of the 24 million people in his country. While it is hard to get accurate figures on most everything related to North Korea, Martyn Williams, who runs Northkoreatech.org, estimates that the number of North Koreas with Internet access is probably in the “low thousands.” Such access tends to be limited to people in elite or scientific circles. Others might be able to get on the domestic “Intranet,” which consists of government-approved content. And of course North Korea’s Web culture has the expected quirks. North Korean websites are apparently programmed so that whenever it is mentioned, Kim Jung-un’s name is automatically displayed to be ever-so-slightly larger than the text around it.

Yet despite the leadership’s best attempts to close off the country, according to a recent report by Intermedia, North Koreans are getting more information than ever before. Computers, USB drives, and MP3 players have found their way into North Korean hands, particularly among the elite. Foreign DVDs make it into the country from China via smugglers or cross-border traders. There are at least 1 million mobile phone subscribers in North Korea. Most people can’t call out of the country, but those near the border who can get their hands on a Chinese cellphone can sometimes pick up a Chinese signal. And while domestic televisions must be fixed to official channels, Intermedia found that North Koreans are increasingly gaining access to television sets that are capable of showing foreign broadcasts. Others will modify their televisions to dodge state controls.

This is hardly a new phenomenon. In Nothing to Envy: Real Lives in North Korea, Barbara Demick describes how in the 1990s a young North Korean named Jun-sang bought a Sony television that had been fixed to government stations and had its tuners disabled by a North Korean version of “crippleware,” ensuring that televisions wouldn’t receive foreign broadcasts. He registered the set with the Electric Wave Inspection Bureau, which put a paper seal over the television’s buttons to certify it had been preset on the politically correct station. Television inspectors would show up unexpectedly to make sure nobody tampered with the sets.

So Jun-sang, eager for news from outside North Korea, used a sewing needle to push the buttons without damaging the seal and also constructed his own antenna. Then, when everyone was asleep, he listened to South Korean television. What he learned turned his world upside down. He heard that the United States was supplying thousands of tons of rice in humanitarian aid. A U.S. congressional delegation said in a news conference that 2 million had died of starvation in North Korea. And for the first time Jun-sang heard the actual voice of his own leader, Kim Jong-il, whose words were usually read by reverent North Korean radio announcers. Kim’s voice was tinny, old, and utterly devoid of mystique. “Listening to South Korean television was like looking in the mirror for the first time in your life and realizing you were unattractive,” Demick wrote. In Jun-sang’s case, these realizations contributed to his crisis of faith in the regime and his ultimate decision to defect.

Examples like these illustrate how even the most basic access to information could be devastating to the North Korean regime. North Korea is built on a myth: that it is a great country to live in, that nothing is lacking, and that the outside world should be viewed with fear and distrust. When people discover that their homeland is built on lies, they lose faith in the regime.

The lies have been so pervasive that even the most apolitical information can corrode them. A North Korean watching a South Korean love story on a foreign Korean DVD would not fail to notice, for example, that the refrigerator in the background is full of food. Demick told me another story about a North Korean she met sometime around 2004, who had worked for the country’s fisheries division. He had access to foreign radio via a Chinese fishing boat that was confiscated for entering North Korean waters. The boat had a radio, and so he was able to listen to a South Korean radio drama. One such drama featured two women living in an apartment complex who are fighting over a parking space. Initially, the North Korean thought it was a parody: How could South Korea possibly have so many cars that people fight for parking spaces? He soon figured out that it was not a joke. A year later, he defected.

If a few snippets of South Korean radio or television can shatter North Koreans’ vision of the world, just imagine if they had access to the World Wide Web. Of course, any such access would be surveilled and censored to unimaginable extremes. North Korea’s leaders are likely watching China, which has shown great skill in employing both technology and human censors to keep its Internet in check. Yet even with these controls the Internet has transformed countless Chinese lives by granting previously unimaginable access to information and (virtual) assembly.

In North Korea, where the regime is far more brittle and shrouded in myth, the effect would be even more dramatic. No, the Internet would not automatically trigger a North Korean spring. Revolutions are sparked by economic and political crises, or other events that brings public discontent to a boiling point. But when such events occur, a networked and informed society is far more likely to rise to the occasion.

Victor Cha, a former U.S. official who handled North Korean issues for the White House, told me that for years the United States has been trying to de-nuclearize North Korea, and “we’ve been spectacularly unsuccessful. And maybe the truth is that we are not going to de-nuclearize them, we just need to get more information into the country.” This, of course, will not be easy to do. But if anyone could do it, it would be a company like Google.

I am not advocating that Google establish a permanent presence in North Korea, which in any event would be nearly impossible. Nor is Google, which in 2010 pulled out of mainland China citing censorship and security risks, naive about these kinds of entanglements. But the good news is that the company can add value without setting up servers in Pyongyang. The trip should be viewed as a powerful act of symbolism: A champion of connectivity lands in the world’s most reclusive nation. Schmidt’s very presence in North Korea will connote the flash and glamour of information technology, reminding North Korean leaders that a country cannot be truly modern without the Internet. And this could pose a temptation that no dictator can resist.