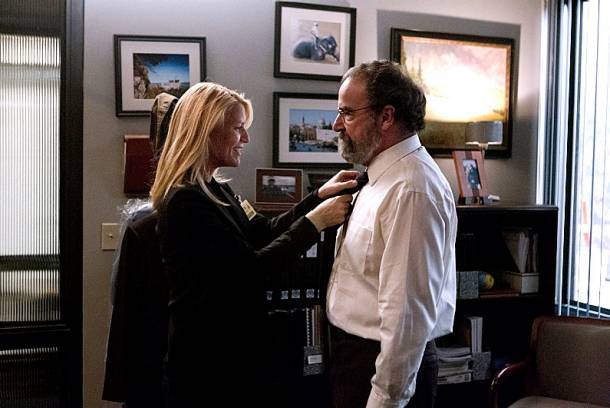 First, the bad news. That debonair, whip-smart, multilingual, trained-in-martial-arts, computer-code-writing Ivy League grad who works around the clock to hunt down terrorists and defuse bombs just seconds before they explode? He doesn’t really exist. He’s a Hollywood invention. Most of the “spies” devoted to protecting the United States from an array of outside threats are harried, middle-class office workers struggling, like millions of other Americans, to keep the weight off, pay the mortgage, and figure out how to work their gadgets.

The good news is that Hollywood’s latest fixation with all things intelligence-related—Homeland, which cleaned up at last night’s Golden Globe Awards, and Zero Dark Thirty, which opened this weekend at a theater near you—provides a more nuanced portrait of the Central Intelligence Agency and other government employees working in the U.S. national security apparatus. Characters like Homeland protagonist Carrie Mathison are, to put it mildly, far from flawless. And the operational abilities of our intelligence agencies as depicted by Hollywood are just as limited as they are in real life.

Why is this dose of reality good news? Because Hollywood has a near monopoly on defining the secretive world of spies and classified intelligence. The workplace drama, for most Americans, is the only way into Langley (real-life workplace dramas that make headline news aside). We all know that Grey’s Anatomy and Boston Legal take some liberties in their depictions of medicine or the legal profession. But most of us have a doctor or lawyer in the family, and have dealings (hopefully not too many) with doctors and lawyers. How many Americans know covert CIA officers or have been involved personally in a classified national security matter?

Seeing in our popular culture a national security apparatus without supernatural powers helps us recalibrate our expectations and understanding of the world, especially the fact that we can’t be delivered from all risks.

I work at a Washington think tank analyzing national security and know enough about the subject to say that a lot of what we see on screen remains way over-the-top in its glamorization of those on the front lines. Nevertheless, the idea of fallibility, what Graham Greene termed “the human factor” in his classic espionage novel by that name, is making decisive inroads. In Zero Dark Thirty, the team searching for Osama bin Laden spends a decade tracing countless bad tips and finding nothing but dead ends. On Homeland, Carrie Mathison deals with incomplete information, the push and pull of a life outside of work, and the frustrations of bureaucratic infighting. Some viewers might think Carrie’s psychological issues take away from her strength as a superspy character, but to me they’re refreshingly real.

Hollywood is moving away from the perfection that was the old James Bond (whose current iteration couldn’t keep the bad guys from blowing up MI6’s HQ in Skyfall), toward reality. Ben Affleck’s Argo also captures the sometime impotence of the U.S. national security establishment: the Iranian hostage crisis was the definition of helplessness, with 52 Americans held hostage for 444 days and a failed rescue attempt. The movie portrays the CIA as absolutely stumped in the middle of the crisis, desperate enough to turn to Hollywood and Canada—Canada!—for help in rescuing a few embassy personnel, in what was a dazzling but small victory amidst a bigger tragedy.

Perhaps back in the ’70s, on the heels of Vietnam, there was a greater understanding that our nation was not omnipotent. Maybe that’s why Americans then were united in support of their elected officials’ refusal to negotiate with the bad guys and angry mainly at the Iranians, the ones who had taken the hostages. By contrast, the recent attack on our consulate in Benghazi, which killed two U.S. diplomats and two CIA officers, got Americans angry mainly at fellow Americans. In the days and weeks following the horrific terrorist attack, politicians, pundits, and the general public sought to place blame on someone in the U.S. government for the scandalous “failure,” as if our intelligence community is so all-knowing, so powerful, so as to immunize any American anywhere from any harm at any time—to deliver us from all risk. We—rather than our attackers—were the bad guys.

Much of the public reaction to the Benghazi attack seemed informed by shows like 24, in which Jack Bauer and his colleagues seemed to have access to satellite images and drone video feeds of every square inch of the planet, and forces mustered at the ready, five minutes away from anywhere. Jack Bauer also made torture seem like a silver bullet, a means to obtain sound intelligence in short order, an old Hollywood crutch that Zero Dark Thirty has also leaned on.

Hollywood has the artistic right to distort historical events, and does so in plenty of contexts having nothing to do with national security or intelligence. But when it does so in this realm, it’s especially meaningful—because, again, it’s the primary if not sole source on these matters for most Americans. That’s why Senators Dianne Feinstein, Carl Levin, and John McCain felt compelled to write a letter to Sony CEO Michael Lynton calling this aspect of the film “grossly inaccurate” and voicing their concern that it could “shape American public opinion in a disturbing and misleading manner.”

It may be reassuring to the public to imagine that torture works (setting aside the moral issues of whether it should be used regardless), just as it may be reassuring to imagine that there’s a James Bond or a Jack Bauer looking out for us, as opposed to someone more ordinary. And maybe it would have been too jarring for viewers to accept Carrie Mathison as their defender soon after 9/11.

But real life isn’t a Hollywood spy thriller. There isn’t just one threat out there that CIA operatives and analysts have to focus on. We don’t have drone eyes trained on every unstable area of the world (at least not yet), and we can’t provide foolproof, 24/7 protection to every American installation or individual across the globe. We live in a world full of dangers, some of which we may be able to prevent from coming to fruition, but the rest we can only accept and prepare for. We will never be able to completely eliminate the various threats to our national security, even as we fight to minimize and manage them.

So let’s have more years-long manhunts on our screens, and maybe even more explosions (spoiler alert!) like the bombing that concluded this season of Homeland. It isn’t that we can’t have happy endings, only that we need to reset our expectations to appreciate what happy endings look like in the real world.