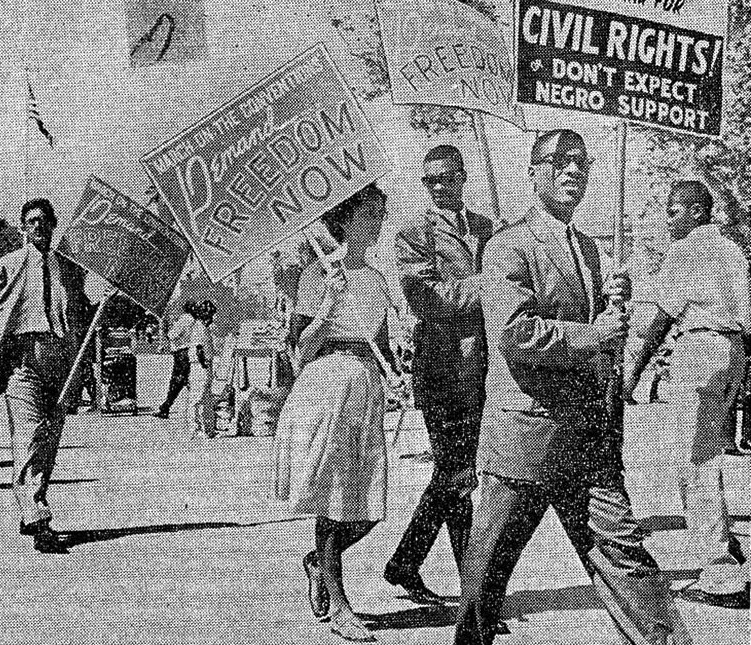 In honor of Martin Luther King Jr. Day, a story of the 1961 L.A. rally where King changed the course of at least one life.

In the mid-1950s, when I was a teenager, I moved with my family from Buffalo, New York to Los Angeles. I’d spent my early years on the Lower East Side of New York and had lived all my life in apartments. In Los Angeles, we lived in a house in Highland Park with a backyard and a tree. It was a modest home, with only two bedrooms, so my parents put up a partition wall in the living room to make a third bedroom, which became mine. It was the first house my dad, a tool and die maker, and mom, a clerk for Los Angeles County, ever bought. The Depression had made them cautious about large purchases.

I knew both my parents—my father especially—had once been active on the left, but that was all behind them by the time we moved to Los Angeles. I, too, had little interest in politics or activism of any sort. Franklin High School, just a few blocks from our house, kept me busy with other things. I loved books and the arts, I liked my ceramics teacher, and I also took part in the drama club. The student body, as I remember it, was all white, and I don’t recall having any black classmates. I’m Jewish and relatively dark-skinned, so when we performed the play Arsenic and Old Lace, I got cast as the maid. None of this occasioned much reflection at the time.

After I graduated from high school, my parents told me I could either attend a more expensive four-year college or go on a trip to Europe and attend a cheaper school. I chose Europe. Part of my time there was spent in London, where I took part in a huge Ban the Bomb rally in Trafalgar Square. Paul Robeson sang to the crowd. I found it exhilarating, and I resolved that when I returned to Los Angeles I was going to take a greater interest in world affairs.

Once back in L.A., I enrolled at Los Angeles City College (LACC) in Hollywood to work toward an English major. To support myself I got jobs as a waitress and as a clerk in a jewelry store, and I moved away from home (although my father did quietly give me some money every once in a while). LACC didn’t have on-campus housing, so I moved into a large old house nearby on Heliotrope Drive, a residence shared by a number of young women, before moving into an apartment with a fellow female student.

In 1960, the anti-nuclear movement was in the forefront of most student activism, as was, for a while, the case of Caryl Chessman, who was on death row for 12 years before finally being executed in the gas chamber of San Quentin in 1960. Students liked to gather at coffee houses like Pogo’s Swamp on Melrose to discuss life and politics.

As time went by, the issue of civil rights occupied more of the nation’s attention. When students organized a sit-in at Woolworth’s in Greensboro, North Carolina, I was among those who picketed Woolworth lunch counters in Los Angeles. When the 1960 Democratic National Convention was held at the Los Angeles Memorial Sports Arena at Exposition Park, activists from all over the country, including Reverend Martin Luther King Jr., came to demand a strong Democratic platform on civil rights. I have a Los Angeles Examiner photo from that day showing me with a sign saying, “March on the Convention, We Demand Freedom Now.”

Since it was an era of student activism, though, such activity didn’t make me stand out much. I was also trying to mind school, with the goal of transferring to Cal State Los Angeles for the 1961 to 1962 school year.

Then, about a year after the convention, on Sunday, June 18, 1961, I returned to the Sports Arena to attend an enormous gathering called the “Freedom Rally” led by Martin Luther King Jr. Eighteen thousand people made it inside, myself among them, and another 10,000 remained outside. Dick Gregory was master of ceremonies, and the celebrities in attendance included Robert Culp, Herb Jeffries, George Shearing, Jackie Cooper, and Sammy Davis Jr. The gospel legend Mahalia Jackson sang the Lord’s Prayer. The keynote speaker was, of course, King himself, who was introduced by Governor Pat Brown.

King spoke in defense of the Freedom Riders in the South, urging their work forward. This was a period in which Robert F. Kennedy, who was attorney general at the time, had suggested an interval of cooling off. “We cannot in good conscience cool off in our determination to exercise our Constitutional rights,” King said that day. “Those who should cool off are the ones who are hot with violence and hatred in opposition to the rides.” By the end, the combination of the voices of Mahalia Jackson and Martin Luther King Jr. had been so overwhelming that I decided that I, too, would become a Freedom Rider. It was a turning point, the moment at which my political talking also became serious political walking.

That summer, in August 1961, after receiving a few months of training, I left Los Angeles with the other freedom riders by train for Houston, where we were to sit in at a coffee shop. My parents saw me off—my mother voluble and unhappy, my father quiet and supportive. The Texas sit-in ended with us being fingerprinted, photographed, and classified at the city jail and then transferred to the Harris County Jail. Ironically, I was booked as a “Negro” because of my dark hair and complexion and placed in the “tank” for black women. So I did at the very least succeed in briefly integrating a Texas jail.

Today, thanks in part to that event in Los Angeles in 1961, I still attend demonstrations and stand on street corners with placards, despite my bad knees. I live in Sacramento, California now, and as a member of Jewish Voice for Peace, I work with my colleagues to end the occupation of the Palestinian territories on the West Bank and try to promote peace and justice for Israelis and Palestinians.

Martin Luther King Jr.’s words guide me in a number of ways, but that’s more the case now than it was back in 1961. As I look back at my younger self, honestly, what inspired me most during that rally in the Sports Arena was less the speech by King and more the singing of Mahalia Jackson. She and her pianist Mildred Falls rocked the house, Mahalia leaving the microphone behind in her jubilation, dancing about the stage with her hairpins flying in all directions. Singing was central to the civil rights movement. Music kept us going, just as it does today with so many movements around the world. It is the great activator. And when Martin Luther King brought the crowd to its feet, it was with a musical quote from an old spiritual: “Free at last!”