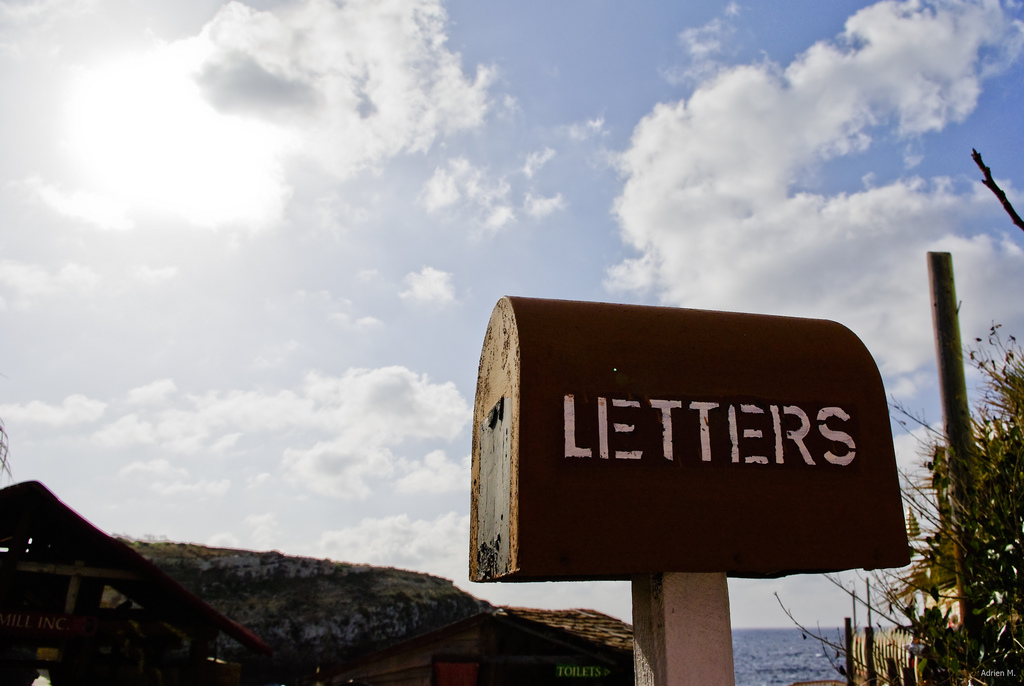 My husband laughed at me as I angled the scissors around the newspaper article for my daughter and folded it into a rectangle. “You’re actually mailing her a clip?” he asked, eyeing me as if I had just slid a vinyl 45 out of its paper sleeve to play on a phonograph. “My mother used to mail me articles.”

Ignoring him, I rummaged in the desk drawer for an envelope, searched for a stamp, and flipped through the contact list on my iPhone (I am of this era!) for my daughter’s new address. Now where was a pen whose ink hadn’t dried up a decade ago? I discarded one with the name of a hotel we’d visited in the previous century. Diving deep into the junk drawer, beneath loose peanut M&Ms, rubber bands, and sticks of gum, Voila! A purple pen! I printed her address as carefully as a preschooler because my handwriting can’t be deciphered, even by me, then tucked the envelope into my mailbox. Tomorrow my postal carrier would retrieve it on his rounds.

Yes, it was prehistoric of me. Why not just paint a message on a cave wall? I could have e-mailed her an online link in a blink and been done with it.

And yet, the physical clipping from a newspaper—hooked up to life support with an ever-grim prognosis—is a tradition I cling to with inked-smudged fingers. It is tangible and more real to me than anything on a computer screen. It’s also more thoughtful. Who doesn’t enjoy receiving something in the mail that isn’t a bill? An e-mailed link delivered to you could have easily been forwarded to a thousand other people. But that 44-cent stamp will only get that story to one reader—you.

Newspaper clips, messily ripped from the page, gather dust in rising piles in a blue crockery bowl on my kitchen table. They reveal a novel I must read, air-purifying houseplants to buy for my home, a new (hmmm, now older) vegan restaurant to try. In rare cleaning spurts, I attack the bowl ready to vanquish the clippings, but instead pause to reread them and helplessly place them back in the bowl, to inform another day.

Perhaps I never will purchase a Japanese aralia to clean the air, but I am ever reminded that I should. A link is nothingness, a cloud’s wisp, a digital arrow. A clip is the real, permanent thing.

My husband, a journalist, has a scrapbook of his earliest published articles. His first front-page story for a small-town newspaper reported on a pregnant tennis player who went into labor during the match but played until the end and gave birth shortly thereafter. That yellowed clip, fragile as a winter leaf, is a wormhole back to him at 20. A link on a cold glass computer screen—which, of course didn’t exist back then—would remain as ageless as a vampire.

When I return from work the next night, I see the letter has been plucked by the postal carrier and has begun its journey to my daughter.

This particular clip was about the value of family stories for kids’ resiliency. A few months earlier, I had sent her a story on how to avoid getting your purse stolen, or pocket picked, overseas. Those clips are a mini-me perched on her countertop whispering, “Keep your purse between your feet!” A link vaporizes with one tap of delete. Subtle nudging doesn’t have a chance.

Maybe she’ll roll her eyes when she sees this article or toss it into her own kitchen bowl. I wondered when the envelope would arrive. Then I forgot about it.

Four days later my daughter called. “I laughed when I saw you sent me a clip,” she said. “You’re so funny.” Then we chewed over the topic and how knowing our own family’s undulating arcs of highs and lows comforted her. She saw herself in the stream of time; her life was part of a bigger story.

She said she enjoys reading a physical article. “I’m more likely to read a clip. It transforms it to something pleasurable. E-mail is just something else I have to do.”

Fewer and fewer people hear newspapers thump their arrival on driveways before dawn. As more readers get their news electronically—and as the number of print outlets shrinks—the publications left standing likely will cease to exist in their physical form.

I will mourn the newsprint paper that dirties my fingers and blackens my kitchen table. But I guess I can always print out a story and slide it into an envelope. As long as a postal service exists to deliver it, I will continue to clutter my daughter’s counter. In fact, I just saw an apple cake recipe she might like. Now, where’s the scissors?