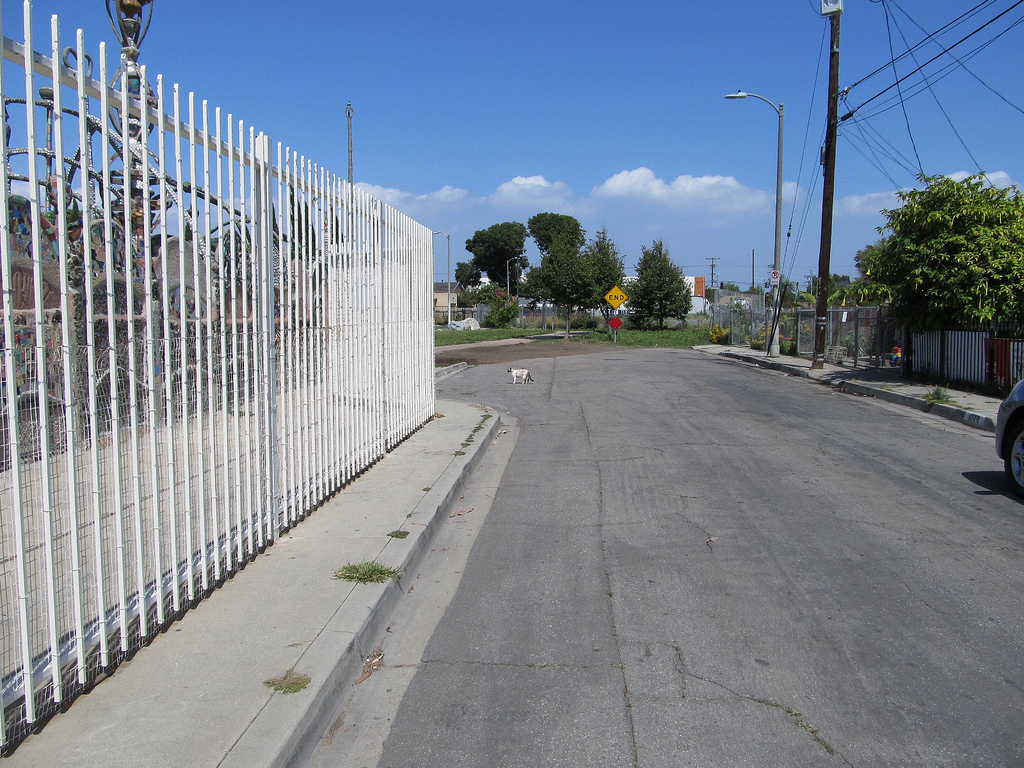 Watts is the place I call home. It’s also the place I want to leave. It’s my comfort, and it’s my trap. When I was growing up, I didn’t want to live all my life in the hood on welfare and minimum wage, thinking this was as good as it gets.

Leaving Watts means breaking a cycle. I’ve tried to break it, but I’ve made a lot of mistakes. Sometimes I feel trapped in a movie stuck on replay. Why do I keep making the same bad choices? How can I make it better? To make sense of it, I began to write down my story. It’s a story of three generations of women in Watts. It’s the story of how I became me, Lakesha Townsend, age 41.

My grandmother, Ruby Mae Wilson, gave birth to my mother, Gracie Marshel Wilson, in Los Angeles, California on November 1, 1952. Ruby was married, but she and her husband soon got separated. Ruby got together with other men, and she had eight more kids. Gracie Marshel took care of them all. Everyone called her “Michelle,” because of her middle name.

Ruby lived in a three-bedroom unit in the Imperial Courts project in Watts. By 1966, when Ruby had her nine kids, she was getting a hundred dollars a month from Aid to Families with Dependent Children. Even in 1966, that wasn’t much money. Ruby had to work, and she did. She had jobs in school cafeterias all over the city.

When the week was over, she liked to party. Every Friday night, Ruby would entertain a house full of friends. They’d pull out the records and dance and drink all weekend long, listening to songs like “Shotgun” by Jr. Walker & The All Stars. Ruby would get pissy drunk and pass out cold. But her male friends didn’t pass out. They would try to grope Ruby’s daughters. Michelle took the brunt of it, with men feeling her up and worse. When she finally got up the courage to tell Ruby that she had been molested, Ruby brushed it off.

One of my aunts told me a story about seeing Michelle, age 13, standing in the bathroom combing her hair in the mirror. A big, black, husky man with big hands was rubbing her chest. Michelle just continued doing her hair. “He was just groping on her little titties,” said my aunt. “Michelle never said one word.”

I can’t imagine what was going through Michelle’s head at those times. Not even her mother would do anything about it. I think Ruby was too ashamed to confront it, but I don’t know. The Ruby I knew loved her children and grandchildren. But Michelle never got over what happened to her.

Michelle took care of her younger sisters and brothers. She combed their hair, cooked, and cleaned. She made sure they went to school. To keep the kids in line when they were at home, Michelle would make up games. “We’d play talent show,” one of my aunts told me. “Because the one thing Michelle loved to do is sing.”

Michelle did love to sing. But the truth was she couldn’t hold a tune in a bucket. We could be riding on a city bus and Michelle might break out into song. Passengers would stare at her, and my sister and I would try to hide our faces. At home she’d make us listen to her sing, too. We’d laugh afterward, saying to each other, “She sounds terrible!” But we always told her she sounded good.

As a little girl, Michelle sang and danced around the house. Everything she touched became a song in her game. One song went, “If you don’t mind, please put that back in your room.” All of the kids would come up with their own songs.

They made a theme song for their momma, too:

Michelle never told her father about the men who were molesting her. She was afraid he would kill them. So she adjusted. She wore sassy clothes and flounced around the men. They’d give her money. By this time, even Ruby could see there was a problem and tried to put a stop to it. But it was too late.

At age 14, Michelle became pregnant with her first child, my older sister, Renee. The father, William Knox, wasn’t someone who had plans to stick around. I don’t think Michelle expected anything different, either. When I was a kid, I’d see him when he’d come over to visit Michelle. We called him “Pops.” I liked him. He was a cool dude. He never had much money to give Michelle, but he was crazy about Renee.

After Renee was born, Michelle stayed in the house with her mother and all eight brothers and sisters. She kept taking care of the household. She also got involved in drugs. I don’t know it got started, but when Renee was a little kid Michelle started using “red devils,” which are similar to ecstasy. She’d head out into the streets, young and wild, hallucinating off the pills.

Michelle’s antics caught the eye of a neighborhood man named Edward Townsend. He was a truck driver and mechanic who also hustled a bit on the side. Michelle, still young, was thick and pretty, and Edward had an eye for the ladies. He had plenty of red devils, he told Michelle. She shouldn’t be out in the streets like that.

They started seeing more of each other. Despite his hustling, Edward, who was 11 years older than Michelle, was old-fashioned. He went to Michelle’s mother, Ruby, to ask for permission to date her daughter. Ruby, impressed by the show of respect, gave him her blessing.

Soon after, my mother became pregnant with her second child. On August 7, 1972, I was born: Lakesha Townsend. Edward and Michelle never had another child together. They were never married. I don’t think they ever discussed it. Everyone knew Edward had a wandering eye. He had another family in the Nickerson Gardens projects.

By the time I was two, Michelle managed to move out of Ruby’s house to a two-bedroom unit at the Imperial Courts housing project on 115th Street.

Michelle now had a chance to make a life of her own. But the years that followed didn’t see her break the cycle—or shield her children from it, either.

This is the first installment of a multipart series by Lakesha Townsend on her family history in Watts, Los Angeles, California. Zócalo will continue to run Townsend’s recollections every few weeks.