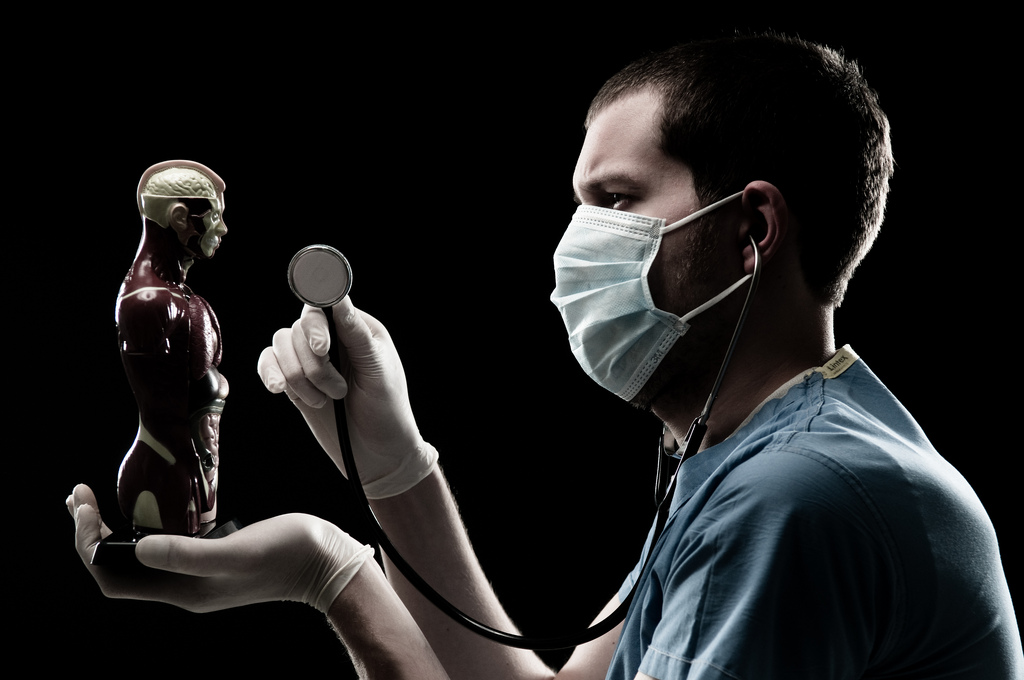 I am what schools refer to as a “non-traditional” student. (I prefer “experienced.”) I didn’t have the highest GPA or MCAT scores in the med school applicant pool. Grades I earned eight years ago as a college sophomore masked the 3.74 I worked so hard to earn as a post-baccalaureate student. But, as far back as I can remember, I was sure I would become a physician. I wore my Fisher-Price stethoscope to bed until it disintegrated, shadowed doctors at Children’s National Medical Center as they cared for kids, read my sister’s copy of Gray’s Anatomy, became an EMT, and did everything my pre-med adviser and professors told me to do. The prospect of so much school and so much debt never fazed me: I knew what I wanted.

And then I didn’t.

It happened on a warm July morning on one of my first calls as a volunteer EMT in the summer between my freshman and sophomore years of college. As I stood on a dock on Fire Island, attempting to teach a group of 7-year-olds how to swim, my fire department pager went off. A voice crackled, “Cardiac event, delta response.” I raced to the firehouse and careened into the ambulance bay. When I learned the address of where we were headed, I knew it was the home of my friend Jack. I’d known him all my life. He was my age, and throughout that summer Jack and I had whittled away countless afternoons on his Boston Whaler, listening to Bob Marley and soaking up warmth through our tanned, freckled skin and sun-bleached hair.

On a barrier island, light and air combine on certain days to make colors unnaturally vivid. Everything—leaves, clouds, grains of sand—seems to have more defined edges and an almost liquid clarity. That July morning was one of those days: hot, clear, and—up until that moment—completely ordinary.

When I arrived at Jack’s house, laden with equipment and mentally reviewing everything I knew about cardiac events, I pulled open the door and saw a group of people standing in a bedroom doorway. I suddenly felt very, very cold. Jack was on the floor, the sheets of his bed tangled around his legs. Two other EMTs were doing CPR. Another EMT grabbed my shoulder and pulled me out of the room. I walked out of the house, stood for a moment in that clear, liquid light and, unsure of what else to do, got back into the ambulance. I watched the medical examiner enter the house, and, when I heard the guttural, animalistic scream of Jack’s mom, knew he was gone.

I never learned the cause of Jack’s heart attack, but during the few seconds I’d stood in that bedroom, Jack’s face—mottled and covered in vomit—had been etched into my memory in perfect detail. It haunted me for months: every time I closed my eyes, every time I started to relax, every time I sat down to study.

Over the next few weeks, my initial shock turned into crippling grief. I blamed myself for not getting to Jack sooner, for freezing under pressure, and for having been useless to him and his family. My certitude about becoming a doctor began to dissolve: maybe I couldn’t function under pressure; maybe I couldn’t help people; maybe I would be a horrible doctor.

I headed back to Georgetown that fall wanting to forget everything that had happened over the summer. I was taking General Chemistry and going through the motions of studying, but my brain felt like it had been coated with Teflon. I’d lost Jack. My father was at home, battling cancer. Previously driven and meticulous, I found myself unable to commit anything to memory, unable to focus, and unable to care. I lost my appetite and rarely slept. My grades slipped, and I told myself that someone who got a C+ in Chemistry and couldn’t handle the loss of a single patient would make a lousy doctor. Reluctantly, I abandoned the pre-med path.

After college, I took a job at a law firm in Manhattan, purely to have work. Several tedious months and many paper cuts later, I was out to dinner discussing life goals with a friend when a woman sitting at a neighboring table handed me a napkin on which she’d written the words “post-bac pre-med.” I did some research on such programs, picked a few that seemed reputable, and dropped some applications in the mail.

One evening, not long after that dinner, I was on a treadmill listening to Bruce Springsteen belt out “Born to Run” when a clearly panicked woman ran up to me and began tugging on my sleeve. (In retrospect, I suppose the red “Ocean Rescue” emblazoned on the back of my old lifeguarding shirt suggested that I knew some basic first aid.) I turned to see the body of a fit, middle-aged man wedged between two stationary bikes. Despite my previous misgivings about my medical abilities, I stepped off the treadmill and knelt over the man. One set of compressions, two shocks from a defibrillator, and several prayers later, I handed the gentleman, now breathing, with a strong, steady pulse, over to medics and headed home in a whirlwind of adrenaline and disbelief. As I walked (OK, more like bounced) home, I realized, when I was honest with myself, that it didn’t particularly matter to me whether that man lived or died. What mattered was that I had done everything I could possibly do to help him; I hadn’t frozen under the pressure.

Today, I am wrapping up my Masters in Public Health at Dartmouth’s Institute for Heath Policy and Clinical Practice, and next fall, when I start at the New York Institute of Technology College of Osteopathic Medicine, I’ll be on the path to becoming a physician. I can’t tell you that I don’t still have moments of self-doubt: Am I smart enough? Will I really become a good doctor? Will I be able to practice the kind of medicine I want to practice in our current healthcare system? But what I can tell you is this: I have held a 90-year-old woman’s hip in traction for 40 minutes while she cried in pain; I have immobilized a 10-year-old boy, numb below his chest after a swimming accident, while his mother screamed over my shoulder; I have comforted a mother who just realized her child was dead; and I have held the hand of a woman experiencing a late-pregnancy miscarriage. Most importantly, though, I have learned that there are times when empathy is the most valuable treatment I can offer a patient.

This journey has not been an easy one, but it has made me more aware of how great a privilege it is to practice medicine. It has also been full of ups, downs, and unexpected detours that have made me more humble, more cautious, and more inclined to ask “why?” But it is these experiences, this knowledge, that I hope will—eventually—help me become as good a doctor as I can possibly become.