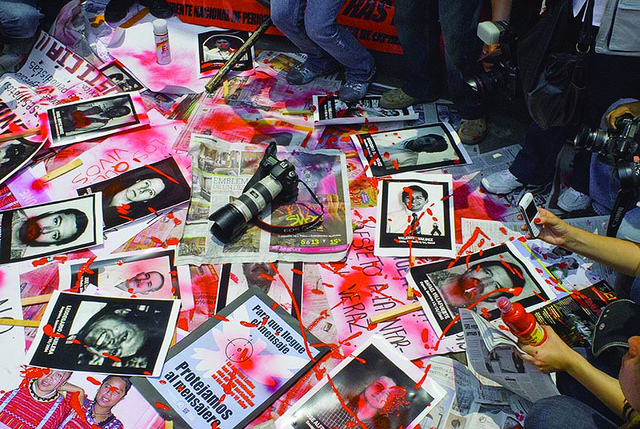 We can’t keep them safe, but we can treat their trauma

Journalists can only do so much, but the government must reduce impunity

Teach the cartels the news business

Violence against the press has long been a pernicious problem in Mexico, but the current wave of drug wars, which began in 2006, has been particularly deadly for journalists. Reporters have been murdered, kidnapped, or disappeared—and have to live in fear not just for their own lives but for those of their loved ones as well. When he was assigned to the Dallas Morning News cartel beat in Mexico City, Alfredo Corchado had some extra protection thanks to his status as an American reporter. But it wasn’t enough to keep the country’s most powerful cartels from threatening his life. In advance of “Reporting From Mexico’s Drug Wars,” a Zócalo event featuring Corchado, author of Midnight in Mexico, Zócalo asked reporters and people who study journalism in Latin America: What can be done to make journalists safe in Mexico?

We can’t keep them safe, but we can treat their trauma

You cannot. The drug cartels in certain regions are too powerful. Law enforcement agencies in these same regions are too weak or corrupt to oppose the cartels. Adding to this toxic mix, data recently collected in one of my studies reveal that approximately 10 percent of journalists have had their families targeted by the cartels. This is the single biggest factor that induces fear and curtails reporting. In practical terms, what this means is that if journalists are to be given protection by the police or army, that protection may need to be extended to their families, introducing yet another barrier to keeping individuals safe.

In Iraq and Afghanistan, where the press also has faced grave danger, one approach to improve safety was to embed journalists. By 2005 in Iraq, virtually every foreign correspondent or photographer was attached to a military unit. Fewer Western journalists died, although many had by then left the country because it had become too dangerous for them. Such an approach would not work in Mexico for obvious logistical reasons.

Where does that leave journalists working in Mexico? Those who are working on drug-related stories will continue to pay a heavy psychological price for endangering their lives. It is therefore essential for news organizations expecting their staff to cover stories that entail significant personal risk to have a mechanism in place to provide emotional support and counseling should it be needed. In general, this is not being done. Good journalism depends on healthy journalists. Reporters and photographers who have been traumatized by their work may not only function poorly as journalists, but also have difficulty maintaining relationships and remaining connected to family and friends. Psychological trauma can cast a large shadow if not addressed properly. It seems to me that there is a moral obligation on the part of Mexican news organizations to take this point seriously. They should follow the lead of their colleagues and news organizations in the United States, the United Kingdom, and parts of Europe who have recognized the harmful effects of psychological trauma on journalists working in war zones. Confidential and effective counseling services have been provided to staff returning from zones of conflict. Such an approach is urgently needed in Mexico. The country has the psychiatric expertise to implement this. Not every journalist is traumatized; my data shows that most are remarkably resilient.

But in a country where providing adequate security to members of the press is not likely to occur any time soon, the onus must shift to news organizations with an expectation that they provide the appropriate level of care, both physical and emotional, to their staff in harm’s way.

Anthony Feinstein is behavioral scientist and professor of psychiatry at the University of Toronto. He is the author of Journalists under Fire: the Psychological Hazards of Covering War (John Hopkins University Press).

There are many reasons why the Mexican press has been besieged over the course of the past six years, a period during which the Committee to Protect Journalists has documented the murder or disappearance of more than 50 journalists. But, to loosely cite Occam’s Razor, the principal explanation may be the simplest: The killers know they’ll get away with it.

Deeply intertwined with Mexico’s violence and corruption crisis is its endemic cycle of impunity. In not one of those more than 50 cases has justice been served. Criminals are attacking Mexican journalists, but it is Mexican institutions that are failing them.

Years ago, a coalition of civil society and press organizations decided the only hope was to take these cases out of the local law enforcement and justice systems, where governments are frequently taken over by organized crime, and elevate them to the federal level. After a long campaign, the constitutional amendment that gave federal authorities broader jurisdiction over crimes against freedom of expression was officially signed into law by President Enrique Peña Nieto on May 3, International Press Freedom Day.

But a law on the books is useless unless it is implemented. An existing protection mechanism to protect journalists at risk is widely distrusted by much of the press. The constitutional amendment was seriously weakened by the elimination of a measure intended to strengthen the office of the special prosecutor for crimes against the press, which has yet to deliver a conviction for a journalist’s murder. Mexican journalists will not be safe until these institutions function. Whether the political will is there to do so remains to be seen.

Sara Rafsky is research associate in the Americas program of the Committee to Protect Journalists. Previously a freelance journalist in South America and Southeast Asia, she was awarded a 2008 Fulbright Grant to research photojournalism and the Colombian armed conflict.

Journalists can only do so much, but the government must reduce impunity

The core issue is to reduce impunity when a crime is committed against a journalist. Over the last 13 years, nearly 80 journalists have been killed, but only a few individuals have been convicted of threatening, murdering, torturing, disappearing, or kidnapping a journalist.

We as journalists can take several steps to reduce risks. If we as a group develop high ethical standards, professionalism, strong verification methods, and the adoption of suitable security protocols, we will make individual journalists safer in Mexico.

However, I am afraid that ethics, professionalism, and security protocols are not enough. Only by reducing impunity can Mexico be a safer place to practice journalism.

Unfortunately, the government has not yet taken serious and effective steps toward investigating, prosecuting, and punishing attackers of journalists. We are still in the darkness journalist Alfredo Corchado has been reporting on for quite some years now.

Jorge Luis Sierra is a Knight International Journalism Fellow developing digital tools for citizens and journalists to map crime and corruption. He focuses on digital and mobile security.

Teach the cartels the news business

In a decade of violence against freedom of expression in Mexico, many methods of creating a safer environment for journalists have been tested, from training them in their own safety to street protests and media strategies that were effective in other countries.

Analyzing the pattern of killing journalists, every now and then this idea has come to me: The cartels have got it all wrong. They are killing mostly the reporters covering the massacres, and the photographers who are the first to arrive on the crime scenes. At the same time, these reporters and photographers are exposing their lives for ridiculous salaries.

Drug cartels need to know this: Reporters are the last element in the news chain. They have very little say about what news they cover and how it gets published. I suspect it is like this everywhere—and has been, ever since journalism became a business.

Of course, cartels could kill reporters just to make examples out of them. But right now they kill reporters out of ignorance. “Oh,” they think, “this reporter is attacking us.”

In order to keep journalists safer, media owners need to assume more responsibility for the news they publish. They have to stop pushing reporters to expose themselves because narco-violence sells.

Here is a wild idea: creating a journalism guide for narco-traffickers so they can better understand the news business. After all, the attacks started as a psychological war strategy to manipulate public opinion and convince the public who was winning the war. This guide would not only teach the cartels but would also give perspective to the general public.

Otherwise, there is not much that journalists can do other than to protest and report the attacks as they happen, and to run and hide when in fear. What made journalists safer in the Persian Gulf War? What is making them safer in Afghanistan?

Silence. Self-censorship has proven to be the safest strategy for journalists, even though it is not included in the freedom of expression reports. And while it keeps journalists safe, it means a society has been kidnapped by the groups committing the violence or waging the war.

In the end, not even heroism can defeat automatic machineguns—and the solution to any war must go far beyond the question of journalists.

Leonarda Reyes is director and founder of CEPET a journalism organization in Mexico. She worked many years for Reforma news group and television as a reporter, editor, and managing editor. She was a Knight fellow at Stanford University.

You don’t have to closely track the swirl of threats against the press in Mexico or the rise in dead journalists there to realize what the country’s cartel-fueled violence makes clear: Mexico’s journalists continue to face danger and are targeted by criminals for a number of reasons.

For years, and especially since the violence has intensified in Mexico, journalists and advocates have pushed to make reporters safer there. They’ve made some progress. Campaigns have raised public awareness of the dangers facing the media, not just locally but worldwide. Journalists in remote and more vulnerable areas of the country are also better networked with their colleagues elsewhere.

But more must be done to root out corruption at the local level and give prosecutors probing murdered journalists more teeth. Too often, investigations are botched as criminals and authorities collude to prevent crimes from being solved. People are tortured into confessions. Evidence disappears. Killers roam free.

At last, after years of pressure by journalists, Mexico’s government is moving forward on a law that gives the federal government jurisdiction over crimes against the press. Monitoring how this law might be implemented and enforced is important. It has taken years of pressure by journalists and the public to get this far. It is no panacea of course. But it is a step toward crushing the blanket impunity that criminals enjoy in Mexico and may provide more consequences when it comes to their ability to silence the press.

Monica Campbell, a former correspondent in Mexico and consultant for the Committee to Protect Journalists, is immigration editor and reporter for Public Radio International’s The World. She is based in San Francisco.