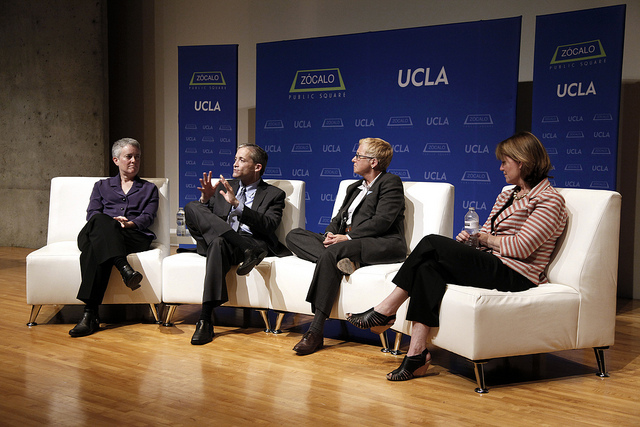 Recent decisions by the U.S. Supreme Court have settled some questions: Federal discrimination against same-sex marriages is now unconstitutional. California must now reopen marriage to same-sex couples. But the decisions have also raised broad new legal and political questions—not to mention literally thousands of technical questions about how to apply existing statutes and regulations to same-sex marriages.

That was the message from a panel of experts on marriage, constitutional law, and Lesbian-Gay-Bisexual-Transgender rights during a Zócalo/UCLA Williams Institute event at Los Angeles’ Museum of Contemporary Art.

In the short term, panelists said, the Supreme Court decisions would have clear results: more equality for marriages, and more marriages. Williams Institute research director M.V. Lee Badgett said that there are an estimated 650,000 same-sex couples in the U.S. and that 100,000 of them are already married.

Do the math, and “that’s a half million couples who could still choose to get married to someone of the same sex,” Badgett said. She predicted that people would get in their cars and get on planes to marry in the states where it’s legal. “New England is lovely this time of year,” added Badgett, a Massachusetts resident.

And San Francisco chief deputy city attorney Therese Stewart, a key player in California litigation on the subject of same-sex marriages over the last decade, said in response to questions from Los Angeles Times federal courts reporter Maura Dolan, the event’s moderator, that there was little chance that groups who backed California’s Proposition 8 ban on same-sex marriage would be able to use the courts to stop the new marriages.

Stewart noted that the court decision that barred San Francisco from marrying same-sex couples when then-Mayor Gavin Newsom did so in 2004—on the grounds that a county had to follow the state on questions of marriage—would, “now that the tables are turned,” prevent a county from refusing to marry same-sex couples today.

But the panelists agreed that the future is harder to predict outside of California and other states where same-sex marriage is now possible. While the panelists indicated that voters and courts would move in the direction of equality for all marriages, they were uncertain about the pace of change or how it would play out in different states.

David Codell, the Williams Institute legal director, noted that in recent days there have been new cases challenging limits on the rights of same-sex couples. These include lawsuits filed by the American Civil Liberties Union in North Carolina, Virginia, and Pennsylvania with the aim of bringing the issue back before the U.S. Supreme Court. He and Stewart said they believed the language of the U.S. Supreme Court’s decision striking down the Defense of Marriage Act would be of assistance in such challenges.

Badgett said there should be momentum as more states overturn bans, with same-sex marriage looking less threatening to those who are now opponents. “There’s a tipping point,” she said. “The more states that allow same sex couples to marry, the harder it is to make the case that something bad will happen, because,” Badgett said, “we haven’t seen anything bad happen.”

But Codell, while anticipating progress for equality of marriages, said some states could hold out for decades, forcing federal action. A majority of the Supreme Court justices were unwilling to decide the question of whether state bans were unconstitutional, but, again, the striking down of the 1996 Defense of Marriage Act, or DOMA, suggests the court could eventually rule that same-sex couples must be allowed to marry in all 50 states.

“I think we have a pretty good sense of where the court will come out if, at the time the court takes the case, the same justices are on the court,” Stewart said, though she said that could easily be four or more years away.

The panelists were less certain about the effects of the Supreme Court’s decision on some 1,100 federal regulations and statutes governing everything from taxes to pension benefits.

Codell said “there are a lot of open questions” about companies who have cited DOMA as a basis for excluding same-sex couples from pension and retirement benefits. Stewart said the decisions create a number of thorny questions revolving around time. To what extent can the new federal recognition of same-sex marriages be retroactive? And how would applying that recognition retroactively change taxes and benefits? Codell noted that such questions could create litigation and new questions when it comes to divorces between same-sex couples. He also counseled patience as the federal government figures out the new realities: “I think we need to wait and see what regulations will be issued.”

Audience questions on specific subjects suggested the thorniness of the many new practical questions. One audience member asked how he and his fiancé, in Spain, should pursue marriage in the wake of the new decisions. (Consult an immigration attorney was the panel’s answer.) Could my partner and I roll over our domestic partnership automatically to marriage? (There’s nothing like that in California).

The panelists said it’s also unclear what effect the decisions will have on other rights questions. Badgett predicted that the rights of the transgendered would get more attention. She also said she expected a renewed push to fight employment discrimination against LGBT people. On the federal level, she said, there is still no law against employment discrimination on the basis of sexual orientation, and fewer than half of the states have such laws.

The panelists noted that marriage is hardly the only civil rights issue being debated in the country, and they wondered whether the coalition that backed marriage equality would stay together on other issues. “The immigration issue, for example,” said Codell. “It’s not as though this marriage struggle is the only one.” 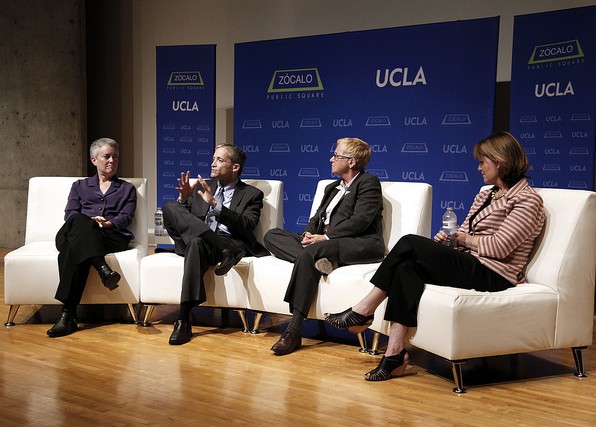 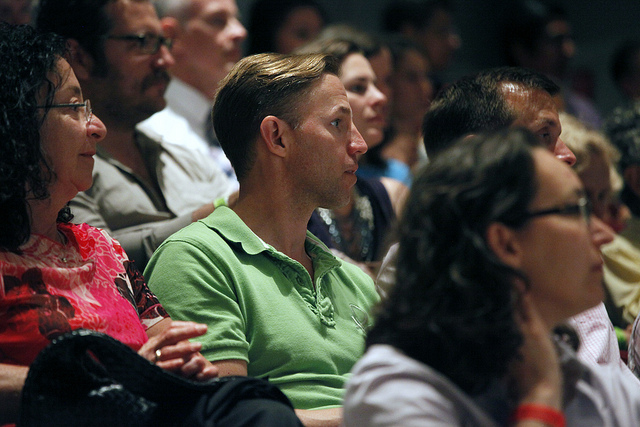 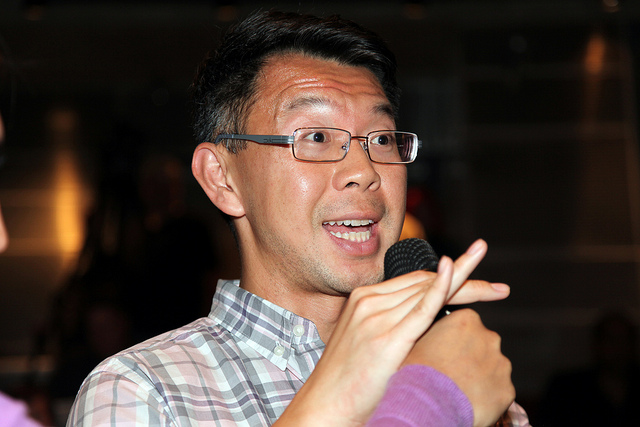 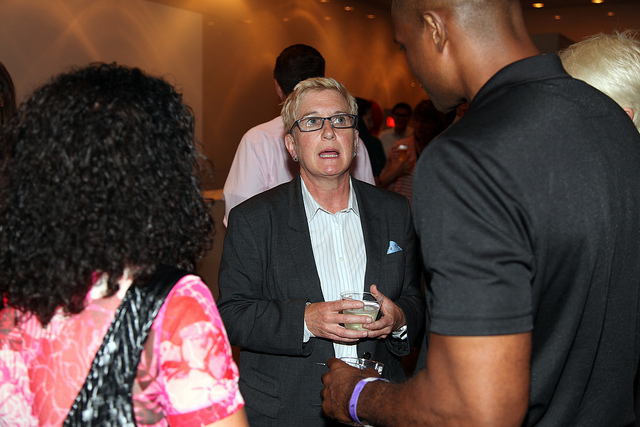 Therese Stewart talks to audience members at the reception 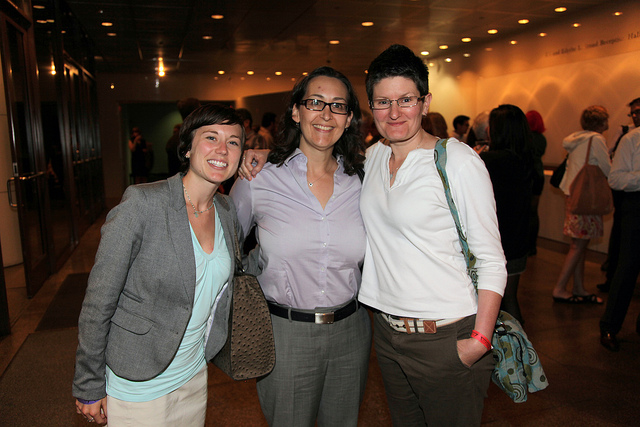 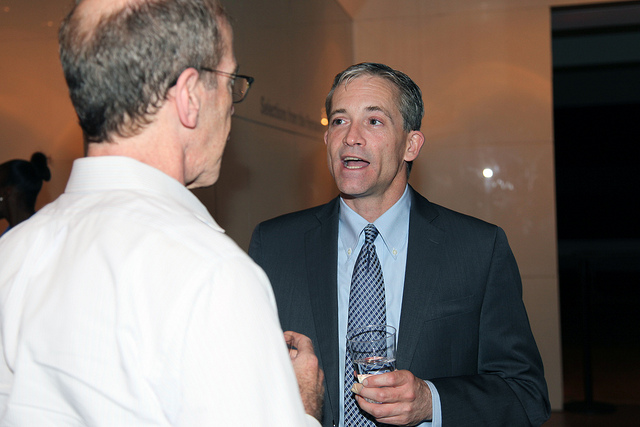 David Codell talks to an audience member during the reception