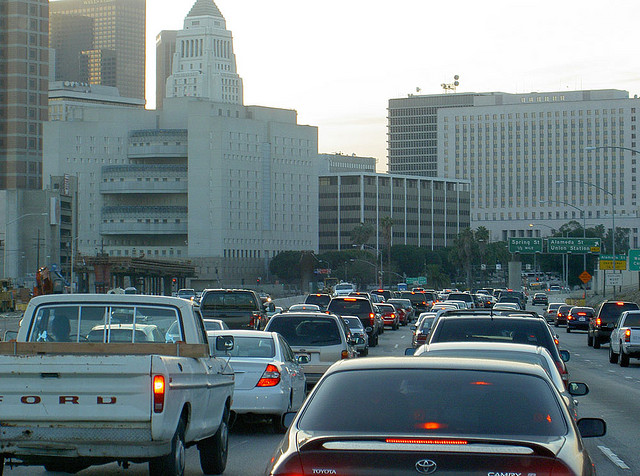 No, but we’ll find better ways to get around

No, but enjoy the plus sides

No, but a lot more of it can be on two wheels

Many years ago, you could zip from Pasadena to Santa Monica at most times of day and expect a pretty smooth run of things. Then more people started noticing that life in L.A. is good. So they came. And bought cars. And joined the fun. Today, Los Angeles is a lot more crowded and a lot more congested, so we’re learning to get around more on train tracks, two wheels, and even two feet. Good for us. Does that mean getting around will get better? In advance of “Will the Bicycle Kill the Car?”, a Zócalo/Grand Park event, we asked several transportation mavens to weigh in on the following question: Will L.A. ever decongest?

No, but we’ll find better ways to get around

Here’s the honest truth with no bling or head ornament on it. L.A. won’t ever decongest. Location, location, location, the world’s best weather, and a heap of culture and community for the myriad nationalities, religions and subgroups who have made it their home, mean Los Angeles isn’t going to lose the millions who live here anytime soon. It is just too good in L.A. and there are too many of us who either want, or need, to live here for the streets and freeways that still define much of the region to unclog.

But what’s so bad about congestion, anyhow? Some really fine music rises from our cacophony. Isn’t the better question, “How can we redouble our efforts to make L.A.’s countless and often charming neighborhoods better places to live and work?”

L.A. is riding a national wave of enthusiasm for human-scale urban living. Like Williamsburg and Red Hook in Brooklyn and Temescal and Fruitvale in Oakland, the popularity of areas like East Hollywood, Echo Park, Glassell Park, Highland Park, Eagle Rock, Venice, and Koreatown demonstrate the public’s insatiable appetite for old-school neighborhoods and historic preservation. The post-urban city dweller in L.A., and there are lots of us, wants trains and buses and tree-lined sidewalks in neighborhoods that sometimes look more like small towns than the patches of a large urban quilt than they are.

In a region increasingly well-served by transit, bike lanes and pedestrian-friendly sidewalks and neighborhoods, bikes, transit, cars, and pedestrians can and must better coexist. But to make it safe for all, we are going to need more grade separation, protected bike lanes, and more incentives, financial and otherwise, to get commuters out of their cars and onto trains, buses, bikes and their own two feet. But how? Congestion pricing, tolls on our roadways, and incentives for transit and bike riders are part of the solution. So are expedited construction schedules à la America Fast Forward and Mayor Garcetti’s vision of significantly expanded transit for L.A.

In Los Angeles, there are as many reasons to reduce car travel as there are cars. But just because one wishes for something to be true doesn’t make it so. It takes smart planning and tireless advocacy by the likes of the Los Angeles County Bicycle Coalition, CicLAvia, Los Angeles Streetsblog, Los Angeles Walks, and even public agencies like Metro and LADOT to turn L.A.’s density into a positive.

For the 180,000 Angelenos who participated in CicLAvia it is now easier to imagine a car-free Wilshire Blvd. But there are plenty of Californians still jonesing to get behind the wheel of a large automobile, even if it means no more than crawling along the 10, 110, 101, or 405.

Bikers, transit riders, and pedestrians have started to put a welcome dent in the unacceptably high level of private car travel in this city, but we cannot stop with the modest gains complete street advocates have made. It is up to the advocates to ensure that the new mayor works for policies that honor his campaign rhetoric that every bike commuter means one less driver. If we can’t solve the first mile/last mile problem of getting to and from L.A.’s growing transit system, the car will continue to be the way too many of us choose to navigate Los Angeles.

With any luck, though, Gavin Newson’s prophetic declaration about marriage equality coming whether you like it or not will apply and more bikes, better transit, and road diets like the plan for Broadway will conspire to reduce the number of those driving into L.A.’s congested hubs.

No, but enjoy the plus sides

Traffic congestion is a costly by-product of economic, social, and cultural activity. The most exciting cities on earth suffer from traffic, and most of them had congested streets centuries before they had automobiles. If you want to leave your slow freeway trips behind, consider moving to Duluth. But most people can’t find jobs or take the climate or the quiet there. That’s why businesses move to growing and exciting places. Doing so makes more traffic. L.A. will likely be congested for decades to come.

Transportation experts advocate investments in new lanes on the I-405, extensions of the rail system, and electronic traffic signals that change timing in response to current traffic. These are needed to provide travelers with more choices about how, when, and where to make trips. They increase the region’s capacity for travel, but won’t eliminate congestion.

If growth in population and business continues, there will be more trips. New rail, freeway, and street capacity gives people more options, and in response we make more—not fewer—trips, using the new capacity to the fullest. Cities succeed when they facilitate more, albeit congestion-inducing, activity. Thus, it makes sense to increase the density of buildings near transit stops; it makes travel more convenient and places less car-dependent—but it also increases traffic near the new development.

New Yorkers recently rejected the prospect of paying congestion fees to enter Manhattan at rush hour, an approach that dramatically reduced congestion in Singapore, London, and Stockholm. Angelenos complain about turning Pico and Olympic Boulevards into one-way streets and balk at higher parking charges downtown and fewer parking spaces at new stores and apartment buildings. These are proven ways to reduce traffic, so it seems we hate congestion cures even more than the disease. We complain about traffic but prefer to live with it rather than bear the cost of eliminating it. I predict you won’t cancel a Paris vacation because it is congested there or skip a Dodger game because of delays leaving the parking lot.

Martin Wachs is Distinguished Professor Emeritus of Urban Planning at UCLA, and Senior Principal Researcher at the RAND Corporation. He formerly was Director of the University of California Transportation Center and served as Chairman of the Transportation Research Board.

No, but a lot more of it can be on two wheels

Traffic is just an assumed part of the landscape here. But there are different kinds of congestion.

We seem to be near that critical point where the urban grid is overwhelmed with the number of vehicles trying to get around and it becomes clearly more of a nuisance than a convenience to get in a car to go anywhere. While young people are choosing to drive less across the board, more and more people of all ages are discovering that the bicycle has become a much more convenient solution, one well-suited to the urban environment, particularly for short trips. On a bike, you can navigate your way through most congestion. We do that now, in growing numbers, merely picking our way along through a system designed almost exclusively for motor vehicles. The development of better bike infrastructure—starting with the implementation of LA’s Bike Plan into a truly interconnected network of bike lanes and safe streets, with destinations including commercial corridors—will make it possible for more people to choose the bike instead of the car for some trips, and that will help alleviate congestion. Some people will never ride bikes or use those bike lanes; but everyone will benefit from the good choices, when given real options.

This past April, I thought about this while stuck in a sort of festive congestion on Venice Blvd, with thousands of other people at CicLAvia. It was packed, curb-to-curb, with bicyclists, scooters, strollers, and skaters. It hinted at what a different kind of congestion might look like, and made tangible a vision of what living in our city might be like if we had more and better choices to get where we’re going every day.

Jennifer Klausner is a native Angeleno, lifelong cyclist, and Executive Director at Los Angeles County Bicycle Coalition. She has 14 bicycles, a Metro TAP card, and a car.