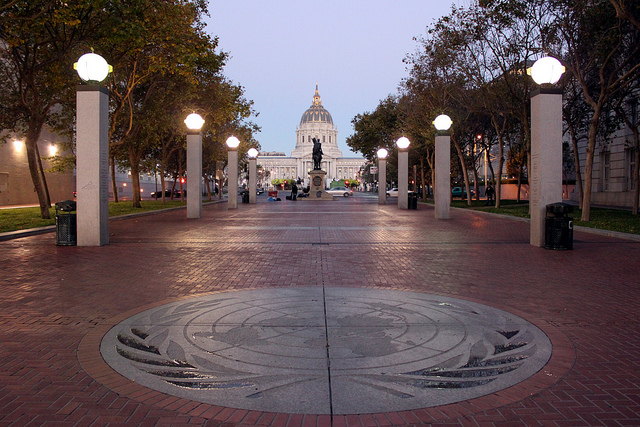 In today’s San Francisco, there are traces of the dream that gripped the city in the spring of 1945, when diplomats from around the world gathered to draft a charter for the United Nations, the organization envisioned for preserving peace in the wake of two world wars. The War Memorial Opera House, where the charter conference convened on April 25, 1945, retains its glorious interior, and commemorative plaques and paintings of the charter signing in June can be found in the Veterans Building next door.

With its accommodating Civic Center buildings and grand hotels, San Francisco proved its capacity to host such an auspicious international gathering—to become, in the parlance of the day, a temporary Capital of the World. Delegates and staff arrived from Europe, Africa, Asia, and Latin America. Celebrities came to be close to the diplomatic stars, and San Franciscans frequented the hotel lobbies in search of autographs. Reporters, including a young John F. Kennedy, arrived to cover the next big story of their lives.

San Francisco’s civic leaders hoped that this success would lure the United Nations to choose the city by the bay as its permanent headquarters. Quietly at first, and more publicly and assertively through the rest of 1945 and 1946, those leaders campaigned to bring the United Nations back to San Francisco. Architects produced speculative plans for a UN complex on Twin Peaks and another on Strawberry Point in Marin County. The city’s boosters scouted the region for sites of between two and 20 square miles, suitable sizes for the type of world capital development envisioned by the UN’s site-searching team in the organization’s early days. When the UN’s interest turned to a more urban setting, diplomats toured the Presidio.

But San Francisco did not become the Capital of the World, at least in our times. (The city did serve as the capital of United Federation of Planets in the future shown on Star Trek). While it had the honor of hosting the UN Charter conference, San Francisco had competition from the very start. During the charter conference, lobbyists showed up to try to interest the diplomats in Philadelphia and (this is real) the Black Hills of South Dakota. By the end of 1946, at least 248 cities and towns in the United States entered the bidding to various degrees, with no invitation whatsoever from the UN. The self-appointed candidates included such major cities as Boston, New York, Chicago, St. Louis, and Denver, and an astonishing array of smaller towns, from Bar Harbor, Maine, to Santa Barbara, California. Representatives of 16 of the most assertive competitors, including San Francisco Mayor Roger Lapham, traveled to London in the fall of 1945—against the advice of the U.S. State Department—to make personal appeals to the UN Preparatory Commission meeting there.

San Francisco could compete on hospitality, the fond memories of diplomats who attended the charter conference, and the availability of suitable sites. However, a West Coast city could not compete with geography. In 1945, a journey to San Francisco from New York or Washington on a commercial airline could take sixteen hours, with numerous stops along the way. And that was on top of the trip from Europe, the traditional center of diplomacy.

After a fierce struggle among diplomats, the UN opted for a location in the United States. Sites west of the Mississippi River were eliminated as being too far away; the Midwest fell out of contention because of its reputation for isolationism; and any site south of the Mason-Dixon Line was considered prone to racial discrimination. Voila: the Northeast. Scouts for the UN looked at locations in the vicinity of Boston and New York. Ultimately, a gift of $8.5 million from John D. Rockefeller Jr. secured the site in Manhattan where the United Nations stands today.

It is impossible to know how a different choice might have affected San Francisco or the United Nations. A location on the West Coast would have represented an even greater leap from the past than most diplomats of the era were ready to take. Physically and psychologically, a United Nations in San Francisco would have had more of an orientation toward the Pacific Rim and greater distance from the Old World. Such a choice would have represented a victory for smaller nations, including many in Latin America that favored the West Coast, and a highly unlikely defeat for the major powers on the UN Security Council.

If the UN had chosen San Francisco, somewhere in the city or region there would be a headquarters building, perhaps even a complex grand enough to be regarded as the Capital of the World. Instead, the memory of the city’s association with the dreams of 1945 echoes in United Nations Plaza, the often grim commemorative space created in 1975 at the edge of the Civic Center and then refurbished in 1995 for the UN’s fiftieth anniversary. Three days a week, amid columns topped by glass globes and bearing the names of the UN’s member nations, the site hosts the Heart of the City Farmers Market. On other days, the plaza is the province of the homeless, who linger, mingle, and sleep amid inscriptions that attest to human rights and dignity—the dreams that animated San Francisco and the world in 1945.