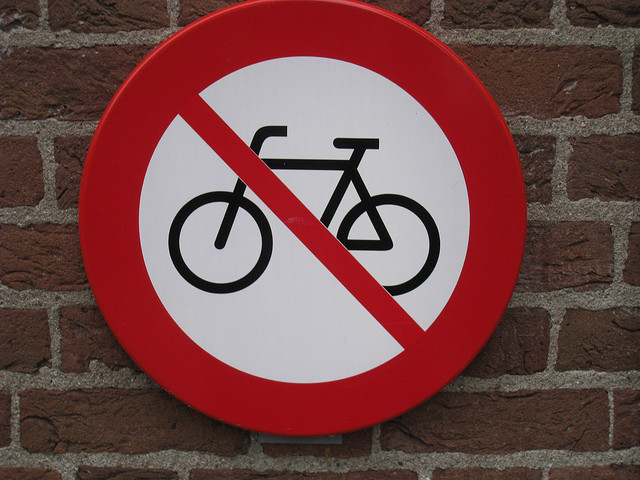 The bicycle is an ingenious mobility device. It gets you from A to B and, in the process, lets you observe your surroundings at a leisurely pace. It is usually lightweight, and it provides an intimate visual, aromatic, and auditory connection to the world around you. With various clever mechanical permutations, it can be folded, even made out of reinforced cardboard. In dense urban environments with traffic congestion, riding a bicycle for short distances is often faster than traversing the same distance via car.

While the bicycle has many virtues, it also prompts people to go overboard. It’s often lauded as the transportation of tomorrow and the savior of cities. It is not. It is called transportation. It is not. That’s because the bicycle is not, strictly defined, a transport device. Ever try to carry a watermelon on a bicycle? (Yes, it can be done, but how much else could you carry?)

The bicycle is a biomechanical device that depends on the rider for balance and propulsion. It therefore operates under rigid limitations: the physical condition (and therefore age) of the rider, seasons and weather conditions, and terrain. If bicycles are used for multi-lane travel, particularly in urban context, their riders are seriously endangered. Cars making right-hand turns are a particular threat.

Today there is an almost messianic insistence that bicycles should be a part of the urban transit mix. Former Los Angeles Mayor Villaraigosa launched a high-visibility campaign to make Los Angeles “bicycle-friendly.” Bicycle marathons in cities tie up traffic to celebrate liberation from the automobile.

The notion of being “liberated” from the car is an interesting one that has zero basis in practical terms. Perhaps, in bucolic villages and smaller cities, bicycle ridership could be a charming and handy way to get around, as it was in many European small towns during much of the 20th century. In large urban centers, however, using a bicycle to traverse 10, 15, or 20 miles one-way is simply not a feasible proposition. And as megalopolises grow, the freeway becomes the key to “getting there”—a transit reality completely outside the practical use of the bicycle.

Los Angeles and surrounding burgs have launched an ambitious effort to paint “bike lanes” on existing surface streets, often removing entire lanes that were formerly for automobiles. This is not a smart thing to do when traffic is already congested. A typical busy lane gets used by dozens of automobiles per minute. A bike lane is lucky to be used by dozens of bicyclists in an hour. To make matters worse, drivers making right-hand turns will have to yield to all the bicyclists going through the intersections, further snarling the streets.

Imposing bicycle accommodations onto an existing vehicular culture and street alignment is prohibitively complex and preposterously expensive on a per-mile basis. Given the relatively small number of commuters who would use such lanes in comparison to car drivers, any cost/efficiency formulae that purport to justify such infrastructure enter the realm of pure fantasy.

Most of our planning assumes that bicyclists would honor traffic law. But there’s a save-the-earth mentality in bicycle culture that seems to make riders feel entitled to ignore traffic management signs. This flaunting of traffic rules, what I would call “eco-elitism” is all top common. I regularly see riders blithely coast through stop-sign-controlled intersections with merely a cursory glance. At low-traffic times of day I’ve even seen bicyclists ride through red traffic lights, as if vehicle rules were not meant for them.

We can of course have dedicated bicycle paths along streams, rivers, and other available routes to provide city residents with pleasant forms of recreation. But to propose bicycle ridership as a serious component of urban transportation planning is specious folly. For many of those urbanistas who fret about environmental issues, let me suggest that the bicycle rack on the rear of your BMW says it all.