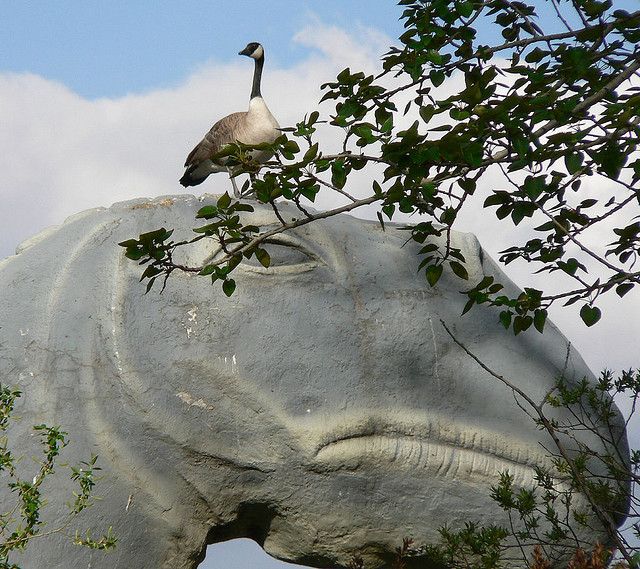 Few things make me happier than seeing dinosaurs on my front lawn. They’re not trundling, spiky stegosaurs or knife-toothed, stubby-armed ceratosaurs. No, my neighborhood dinosaurs here in Salt Lake City will be familiar to many who reside in the American West. The crushes of quail that bobble and scurry past the sidewalk in the warm morning light; the magpies that stalk and hop after insects in the cool grass; even the pigeons that take off with clapping wings at the approach of overfed outdoor cats—they’re all dinosaurs.

Occasionally, I’m harried by pedants who insist that birds are not and cannot be dinosaurs. Birds—they protest—are descended from dinosaurs. But biodiversity cares not a whit for human classification systems. In reality, birds are just one branch within the wider dinosaur family tree. For millions of years, birds lived alongside the Mesozoic celebrities we know and love. But when the earth-bound dinosaurs we call Tyrannosaurus and Triceratops bit the dust, the avian dinosaurs we call birds survived.

The idea that birds are living dinosaurs isn’t new. Victorian and early 20th century researchers toyed with the notion, and paleontologists forcefully reinvigorated the idea during the 1970s, when the discovery of some exceptionally bird-like forms—such as the switchblade-clawed “raptor” Deinonychus—hinted at a deep connection to early birds. Since then, discovery after discovery has confirmed that avians truly are a form of dinosaur. We’ve also learned that most dinosaurs were probably warm-blooded creatures with feathers. This has become so established that the discovery of the fossils of yet another plumage-covered dinosaur has become a rather mundane event.

While paleontologists have no trouble seeing a raven’s inner dinosaur, many people resist the idea. They prefer the scaly, imposingly reptilian visions of dinosaurs from decades long gone. But complaints that dinosaurs are somehow less scary when coated in feathers are total bosh. Picture Tyrannosaurus rex covered in a coat of fuzz (as we can rightly expect the carnivore to have worn based on other tyrannosaurs found with such plumage). Our favorite dinosaurian monster still would have been every bit as powerful and rapacious, the fluff on its body rippling and wafting as the tyrant launched itself from the shadows of the Cretaceous forest to plunge its railroad-spike-sized teeth into the neck of an unsuspecting young Triceratops.

If other lineages of dinosaurs survived to this day—modern descendants of Apatosaurus and other favorite forms—perhaps the break between dinosaurs and present-day life forms wouldn’t seem so sharp, and elementary school children would learn that the major forms of vertebrate life are fish, amphibians, reptiles, dinosaurs, and mammals. (Of course, go back far enough and all those groups could technically be called “fish,” given their evolutionary descent from a particular fish lineage that grew limbs and clambered through Devonian swamps, but that’s an essay for another time.) Calling birds dinosaurs challenges our perceptions of the categorization of life, and that is precisely why I relish purveying this fact of evolutionary history.

Extinct dinosaurs are only becoming odder and more fascinating through the realization that we live among their surviving relatives. Paleontologists now recognize that many traits we think of as distinctively “bird” were actually widespread among other dinosaurs. When pregnant with a clutch of eggs, mother Tyrannosaurus laid down a specific type of tissue called medullary bone in parts of her skeleton, just as modern birds do. Paleontologists now believe that dinosaurs were teen moms—life for them was apparently so harsh and prone to early death that they had to start reproducing before they hit full maturity if they were to leave any descendants to the next generation.

Feathers hold even more clues. Not only have researchers discovered scores of feathery, fluffy, and fuzzy dinosaur fossils, but some paleontologists have been able to reconstruct dinosaur colors—colors!—by comparing microscopic structures in those feathers to the same features found in living bird plumage. The pigeon-sized feathery dinosaur Anchiornis was glossy black, like a magpie with a tuft of red feathers on the head, further blurring the line between dinosaurs past and present.

With apologies to birders and ornithologists, for me, birds can never compete with their celebrated non-avian relatives. A raven lacks the majesty of a flesh-rending Allosaurus. A hummingbird, astonishing as the little avian is, will never be quite so bizarre as the titanic sauropod Supersaurus, stretching over 110 feet from the tip of the herbivore’s tiny head, down a elongated neck, hefty body, and graceful tail.

But I still love to watch the one remaining branch of dinosaur hop and flit about. They connect the world I know to a prehistoric past I’ll never get to see, left to us only in preserved remnants of tooth, bone, and feather in the sorts of dig sites I find myself inextricably drawn to every summer. The ravens that fly over and turn a quizzical eye towards me as I search Utah’s dinosaur-rich rocks don’t seem so different from the long-lost ancestors that I’m hoping to uncover. They make time travel wonderfully simple. From beak to tail feathers, birds are beautiful, delicate dinosaurs that remind us of a time when our furry mammalian ancestors snuffled and hid beneath the feet of the most wonderful creatures ever to have evolved.