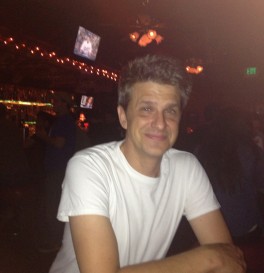 John Lehr’s most famous “role,” if you can call it that, masks a personality that is, at heart, a persistent smile. You’ve seen him—and heard him—over the years as the funniest caveman in the commercials for Geico insurance. The running joke in the commercials, in case you’re among the few who haven’t seen them, is that Geico’s pitch of “it’s so easy to use Geico.com, a caveman can do it” triggers outrage among present-day cavemen, all of whom resemble hairy museum displays of homo erectus yet speak in the language of therapy-addled modern Americans. “That is really condescending,” complains a caveman in one commercial. The ads, which hid Lehr’s comedic face but helped pay for his house, are proof that a career committed to improv can pay, even if it’s with strange dividends.

As long as I’ve known him, the skinny kid from Kansas has been cheery. We first met more than 20 years ago, when he was working with a friend of mine in Chicago. He was always the cheeriest guy at the party, quick-witted but never mean or bitter. Since then, we’ve seen each other a few times, and, as with most friends you meet in the crucible of youth, the friendship is well forged and picks up easily. He’s smiling even though I’ve asked him to meet me at a bar, rudely forgetting that he’s quit drinking.

The Backstage in Culver City looks like an outdated ’70s-style saloon from the neighborhoods of a Midwestern city, ripped and plunked into sunny L.A.—dark wood, dark leather, dark paneling, tiny pool table, karaoke machine, insufficient lighting, and all. It’s one of the few likable bars I have found in Los Angeles, and I spent many nights here escaping the media circus of the O.J. trial back in the ’90s. In honor of those times, I order a vodka and cheap beer. Lehr orders an O’Doul’s.

Of course, sex and a tell-all book are par for the course in Hollywood, but a book about your husband’s sexual inadequacies?

Lehr got his start in the Mee-Ow show at Northwestern University, an improv training ground for comedy giants such as Julia Louis-Dreyfus and Seth Myers. Saturday Night Live was his goal, but his first break was in a quirky Chicago improv troupe called Ed, which ran on-and-off for more than a year. Ed, directed by a mutual friend, “used improv to forge relationships and action and creating a scene,” rather than serving a punch line, Lehr explains. The beauty of Ed, and the group’s later iterations in Chicago and Los Angeles, was that a scene could end on a sweet note, or a sad note, but the characters would be fully developed in just a few minutes. As a live performance, it had the feel of a satisfying short story collection. It also felt intimate, as if only you and the 60 people in the small house that night would ever experience these characters in that setting. The impermanence was intoxicating. “It transformed my career,” Lehr says.

Since then, Lehr, still boyish-looking, even as experience has added lines to his face, has been carrying the flame of improv-as-art. Impressed with Lehr’s work in Ed, a Fox talent scout recruited Lehr and a fellow cast member to Los Angeles. Still, neither managed to land something stable. One problem? “I was doing major drugs and alcohol,” Lehr tells me, with a blend of good humor and regret that shows he wishes it hadn’t happened but isn’t unhappy with where he is now. Lehr and his fellow Ed alum bounced around in development purgatory until they finally landed on E! with a show called News Weasels. It lasted less than a year before getting canceled—not because of Lehr’s addiction but because of a failure to secure the rights to news footage. Imagine The Daily Show without any news clips.

Lehr learned quickly that you can spend a well-compensated career in Hollywood and never see yourself on a screen. He joined the casting calls, did deals, wrote scripts, and was paid for projects that died, one after the other.

Lehr’s run as the Geico caveman began, in one way, as just another casting call at one of those “huge buildings in L.A., with doors all around and bleachers in the middle” where the actors sit waiting to audition. But he knew the directors and, as he puts it, “I was the guy who could improv.” So he did. Once he got the job, Lehr developed a routine in which he would get the scripted take and then the directors would let him riff. That’s how, when he was improvising a scene as the hurt caveman in a therapist’s office, his cell phone rang and he came up with the line “It’s my mom, I’ll put her on speaker.”

The long-running series of commercials finally made Lehr a secure actor with attendant benefits: house, school for the kids, insurance. He says makeup deserves a lot of the credit. Lehr’s makeup artists warned him it “would freak me out,” as they spray gunk down your throat (to take an impression of the inside of your mouth for caveman teeth) and leave you masked for hours on end. Lehr says that amount of makeup over time can alter your sense of self to the point of emotional discomfort. “I can channel it,” he says, “but it’s definitely weird.” If you’re cringing now thinking of the TV show based on the Geico cavemen (it happened), Lehr was spared that disaster. He was too busy in pre-production for a different show he was executive producing at the time.

Back to the drugs and alcohol. Lehr finally quit them in the late ’90s, but in a bit of karmic retribution, his wife wrote a book revealing how Lehr’s addiction had harmed their sex life. It was called Ill-Equipped for a Life of Sex, recounting how Lehr would even say no to sex when she approached him in the shower. Of course, sex and a tell-all book are par for the course in Hollywood, but a book about your husband’s sexual inadequacies? Lehr kept smiling, even during joint appearances on local TV or speaking at her book-signings. Seen from afar, Lehr’s support seemed like a mix of recovery process, being a good husband, and an unending desire to explore awkward situations for the sake of future improv.

It helped that his career was starting to gain traction. He connected with writer/director Noah Baumbach after working in Baumbach’s debut, Kicking and Screaming. The two put together two different improv teams with old cast mates from Chicago. They packed theaters and made a short film. Cast mates landed TV parts here and there. Lehr was in a pilot for Fox that didn’t take. Always back to improv: never the simple punch line. Always sunny. Lehr’s Kansas goodness mixed with the laugh lines have made him unique, but not big box office, at least not so far.

With a new writing partner, one-time Star Trek: Voyager actress Nancy Hower, Lehr came up with a show based on a young man dragged back from New York to run his late father’s grocery store in Ohio. TBS bought the show, which was called 10 Items or Less. “We wrote scripts for the network executives and the crew, but the scenes were all improv’d,” said Lehr. The show has a slack feel, and you have to trust it. While not every scene will end with a laugh, the characters feel true. After three seasons, 10 Items or Less fell prey to TBS’s emerging late-night talk strategy and got canceled, but the takeaway among producers was positive—not least for financial reasons. “I still have executives tell me in pitch meetings how impressed they were that we kept 10 Items under budget,” Lehr says. A reputation for financial prudence now precedes him. The show also has gained a following on Hulu.

That led to his new show on Hulu, Quick Draw, which is set to debut in early August. Lehr plays a Harvard-educated sheriff in 1875 taking new-fangled forensics to the Old West. “Modern-day criminology was just getting started,” Lehr says, as police started using ballistics and better ways of identifying people. The trailers have a CSI: Dodge City vibe.

From the intimate stage of Chicago to the long tail of Internet video: to Lehr, it feels like the old days, just with new technology. “My goal all along is to do theater on TV, to do something powerful and true to a smaller audience who loves it,” he says. Technology allows us to revive that old feeling, of the committed fans experiencing something rare and unexpected. But, unlike real theater, if you like it, you can always watch again.