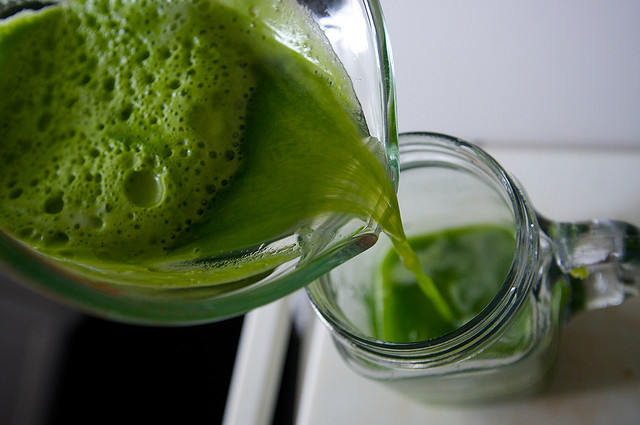 Los Angeles is the only place I’ve ever been invited to someone’s house for a meal and been served a glass of juice, period. That morning, I sat on my host’s patio, sipping a small, bright glassful of antioxidant-rich juice, listening to the gentle crash of waves, and thinking that surely the plate of bagels must be coming. It never did.

Southern California has long been ground zero for alternatives to everything, eating included. Who can forget Woody Allen’s bewilderment in Annie Hall when he joined Diane Keaton at the Source and gamely ordered “alfalfa sprouts and a plate of mashed yeast”?

I moved here for film school. During my first week, when I was making my way to class with some combination of Diet Coke and Donettes, I saw a classmate sitting on the floor with a large paper bag of what appeared to be lawn clippings. She had stray blades hanging from her lips, and I forgot not to stare. It was called wheatgrass, she told me, tartly, and “it’s better for you than steak.”

When I invited some friends over for dinner at my small rented bungalow in Santa Monica, one of them arrived with a canvas tote, out of which she pulled several Ziploc baggies that she deposited at her place setting. Dispatching with the attendant fork and knife, she explained that she was currently eating only “foods that were sprouting.”

Still, most of these dieters eventually give in to that ancient evolutionary urge called “hunger.” The small bales of wheatgrass make room for the apple; the sprouts cede to fruit salad; the Spiritual Lettuce Edict expands to include falafel. Ninety-five percent of diets fail.

Only the juicers seem to soldier on when their comrades fall.

The first true juice regimen I heard about was the Hot Lemonade cleanse. For several days, you’re supposed to drink hot water with lemon and cayenne and a drop of maple syrup. The lemon juice supposedly alkalizes the body and washes away the acid that has built up in your system. The cayenne acts as an “irritant” to the walls of your cells, allowing them to release the toxins that have built up on a cellular level. Soon all of the neutralized acid and released toxins are eliminated, since there is no actual food in the digestive tract.

I admit I had some questions—and still do. It’s not that I doubt I have some chemical contaminants in my body; it’s that I’m not convinced that lemon juice and cayenne will conquer them. After all, when I’m through juicing, I will still live in a polluted big city. I will still shower and bathe in its treated water. I will still breathe its air. I will still store food in plastic and wear mass-produced sunblock and pump my own gas. Even if I get rid of all of those toxins, I’m not going to move into a bio dome afterwards. So is there really a point? Besides, isn’t getting rid of toxins in our bodies kind of what our kidneys and liver are supposed to be doing?

But that doesn’t mean I was put off by the idea. I have attempted two juice cleanses. The first time, when I was on the recently much-hyped Master Cleanse, I lasted eight hours, maybe nine, until I ran into a friend at a screening. He took stock of my condition—doubled over with a headache, close to drinking my own blood for sustenance—and asked, “Why are you doing this?” All I could manage to wail back was “I don’t know!” He drove me to Starbucks, where I was revived with a latte and Snickerdoodle. The second time, my juice cleanse included green tea, which at least lessened the caffeine withdrawal headache. That attempt lasted a full 24 hours.

So why do people like me, who know better, do this to ourselves?

I suspect part of it is just where we live. Yes, telling people how and what to eat is more than a California concern; diet industry revenue nationally was $61.6 billion in 2012. But Los Angeles was the first place where immoveable foreheads became normal, where smiles no longer included eye crinkles, and where Mommies would return to the car pool line after spring break with slightly lifted eyes, slightly smaller noses, slightly cushier mouths, all sporting a look that I came to call “The Beverly Glen Whoa.” Thousands of people move out here to be a part of the “Industry,” and, as with any artistic career, it is a gamble: you labor in oblivion for a small shot at immortality—to see your name, your face, captured forever in time, forever young and healthy, forever as you always see yourself. No wonder we’re attracted to juicing and its promises of cleansing away the decaying, the “toxic,” and the old.

But there’s also a darker side to it. I’ve wrestled with food issues myself. I’ve read about food, contemplated food, discussed food with friends, and then got annoyed with myself for spending so much time contemplating food. Sixty-five percent of American women between the ages of 25 and 45 report having disordered eating behaviors, according to the University of North Carolina. Juicers often use terminology that sounds all too similar to the lingo of eating disorders. They speak, for intance, of the “euphoria” they experience as they leave food behind, a sentiment that is eerily reminiscent of the “pro-ana,” starvation-promoting underground or the better-known Kate Moss line: “Nothing tastes as good as skinny feels.” And then there is the obsession with the purge of toxins, all too reminiscent of the celebratory side of bulimia.

“I’m getting ready to introduce solids,” my juicing friends announce. A déjà vu feeling wafts over me. I remember that the last time we talked about “introducing solids” we were talking about our infants. Now, grown women introduce themselves to solids. One theory about anorexia is that it is a rejection of womanhood, that the adolescent anorexic is seeking to nullify her emerging body, her adult body—her hips, her growing breasts.  She is seeking to keep herself small and therefore safely in the realm of childhood. So perhaps the California Eternal Youth Quest leads naturally to eating disorders. In our youth-obsessed culture, it’s a way to hold onto absolute youth—infancy.

For me, juicing seems tied to an emotional state that is essentially mournful. Maybe I’m too committed to living the quote from T.S. Eliot that I had printed on my personal stationery years ago: “Not farewell, but fare forward, voyager.” And maybe I’m drawn to that line not by courage but by fear—fear of the futility of longing for a time that has left me: my childhood, and soon, my child’s childhood. So I quote Eliot, and I drink juice.

Every year, I make resolutions on New Year’s Day. I write them down in my date book and check back on them throughout the year to see how I am doing. So far, since January 1, I have driven my children to school 15 times without muttering obscenities about other drivers. I have donated bags of clothing to Goodwill on schedule. I have hauled our long-dead electronics to the recycling center. I have started work on my first patchwork quilt.  I have not learned to use the computer animation program I bought the kids for Christmas. And I have not yet tried another juice cleanse. But it is on my list again. Don’t ask me why. I am a Californian, after all.

So if you see a small blonde woman wild-eyed with desperation trying to cut the line at Starbucks late some afternoon before the end of this year, it might be me. Please, have mercy.