When I was growing up, the idea of a mentor felt like a foreign concept. So did a lot of things.

I was raised in New York in a traditional Albanian home. I was extremely sheltered, and the only people in my life who were even close to mentors were immediate family members and a few other relatives. It was never easy for me to ask for help or guidance. An older sister might have been a huge help, but I didn’t have one. Americans were seen as outsiders, and I wasn’t afforded many opportunities to connect with the outside world, except during school hours.

Marriage was supposed to save me. Albanian girls were brought up to believe that marriage is of the utmost importance, and everything else is secondary. So I ended up getting married at the very young age of 17 to an Albanian man 10 years my senior. I didn’t know him. We didn’t date. Nothing.

This proved to be my ticket to freedom, but not in the way I might have expected. Marriage brought me to Los Angeles, where my husband lived and worked. It took me more than 10 years, but I made my great escape—divorce. It was a hard transition. I was so used to being taken care of by my family and then by my husband that I never had a sense of independence or of self. In my late 20s, I had to figure out how to budget, save money, manage my time and priorities, and be the sole person responsible for me. It felt isolating yet liberating.

I was living my life the way I saw fit and not how others thought I should. But I felt disconnected from the rest of the world; Los Angeles is a place where it’s easy for anyone to live in isolation, and because of both my background and my unusual situation, I struggled to meet other women.

In 2008, about a year after I left my husband, I started my own nonprofit, Women Empowered. It was an attempt to connect, to forge relationships and connections among women in Los Angeles of all ages and backgrounds. In the process, I discovered an entrepreneurial spirit within myself that I’d never known how to embrace. I also began to think that I might want to mentor others.

I knew mentorship wasn’t something to be taken lightly. But I was determined to become a mentor for three reasons: 1) I knew firsthand the need for guidance; 2) I wished I’d had a mentor of my own growing up; and 3) I thought I could relate to girls without mentors.

I formed a partnership between Women Empowered and another nonprofit, Girls Today Women Tomorrow (GTWT), which is based in Boyle Heights. GTWT has been around for more than 15 years; the organization works to teach leaderships skills to teenage girls and prepare them for college and life. GTWT needed more mentors. And Women Empowered needed GTWT’s resources to create a full mentoring program.

We started to host group mentoring activities with the girls, which later led to one-on-one mentoring. We jointly host mentor training sessions and match mentees and mentors according to educational and professional backgrounds and interests.

Today, I mentor two teenage girls, Melissa and Jasmine. Melissa and Jasmine are both from Boyle Heights. Although they’re Mexican-American, their backgrounds are very similar to mine in the major role played by families and the expectation, in their homes, that girls will be subservient and obedient. When I see the girls, who can be shy and introverted, I see myself. Growing up, I knew I had a voice but didn’t know how to use it. They struggle with the same problem. 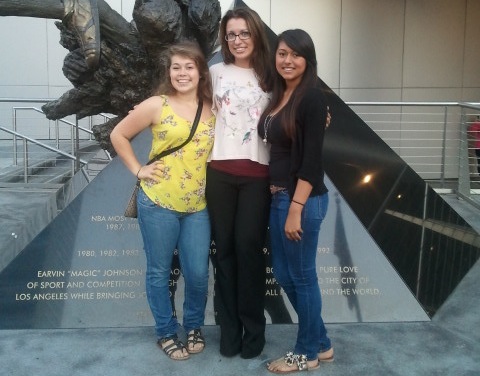 My goal is to make them feel like they’re not alone and that there are people who can relate to them. As a teenage girl, you feel a great deal of judgment and criticism, especially toward your outward appearance. I strive to instill confidence in Melissa and Jasmine and to broaden their horizons. One way I’ve done the latter is to introduce them to the city of Los Angeles and its possibilities, especially cuisine. Sushi and Italian restaurants have been new experiences for them. The first time we tried sushi, Melissa was extremely hesitant, but finally took a bite and then proceeded to tell me how good it was. It meant enough to her that we took pictures and shared them with her siblings. It was a small moment, but an eye-opening one.

Mentoring is a two-way street and has been mutually beneficial. I’ve found myself inspired by Melissa and Jasmine’s hunger for change. And I’ve enjoyed exploring the city with them. We are continually learning something new, experiencing something new, and growing together. Los Angeles shaped my life, and now it’s shaping theirs too.