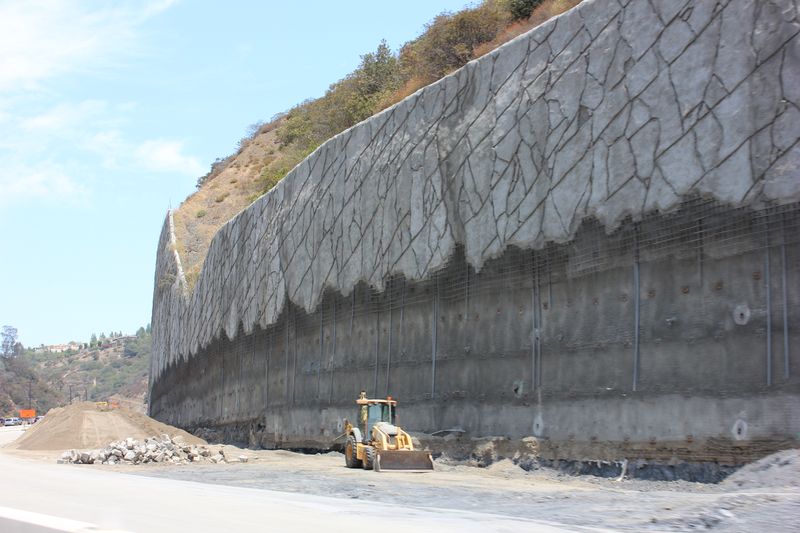 If you’re among the 300,000 or so commuters who crawl through the Sepulveda Pass every day, you’ve surely noticed the $950-million construction project that is adding an extra lane to both sides of the 405 Freeway. You’ve no doubt spied the giant earthmovers slicing through the mountain. And at some point your gaze has rested on the eight-story-tall retaining walls doing their best to hold back the Santa Monica Mountains.

Although expensive, inconvenient, and (some argue) unnecessary, those new cuts through the mountains thrill me. I’m a geologist, and the massive expansion project has given me a temporary glimpse into the very anatomy of this mountain range that bisects Los Angeles, separating West L.A. from the Valley, downtown from Burbank. You may not know it by looking at the sleek cars streaming over the pass or the helicopters beating overhead, but the last time some of these rocks touched air, dinosaurs walked the Earth.

You can take a quick tour of the geology of the Sepulveda Pass from the comfort of your driver’s seat. Start by heading north on the 405, about a mile past the Wilshire Boulevard on-ramp. Before you drive under the Sunset overpass, glance out your passenger-side window. There, on the right, loom two of the gargantuan Caltrans retaining walls.

Just look at them! During the construction phase, you may have noticed their cageworks of reinforcing steel, further fortified with concrete. The walls are anchored to the rocks with brobdingnagian nails, some as long as 85 feet and with the diameter of salad plates. Eighty-five feet is the width of an NHL hockey rink: These walls need long, thick nails because the rocks here are weak and prone to collapsing.

Continue driving north toward the Moraga Avenue exit until you pass the cylindrical Hotel Angeleno on your left. If you look at the mountain just beyond the hotel, you’ll see a big, light yellowish-brown outcrop. This is Cretaceous sandstone. About 100 million years ago, this rock was a huge pile of sand at the bottom of a great inland sea that covered much of the western United States. Over millions of years the sand was compressed to form sandstone, and then was uplifted along the Benedict Canyon fault. The Benedict Canyon fault, one of many in this area, stretches northeast from Brentwood, crosses the 405, continues east to the mouth of Laurel Canyon, and then cuts over the north edges of Forest Lawn and Griffith Park. You can’t see it from your car because it’s covered by brush.

Cretaceous sandstone is strong and not prone to landslides, so it doesn’t need great walls to hold it back. Caltrans engineers probably wish it made up the entirety of the Sepulveda Pass. But alas and instead, the builders are stuck with a different kind of rock that forms the core of the Santa Monica Mountains, including much of the next part of our tour: the stretch from Getty Center Drive to the Skirball exit. These dull gray rocks, called the Santa Monica Slate, are from the Jurassic period and are some of the oldest in Los Angeles. One hundred and sixty-five million years ago, they were mud that formed an underwater seabed. At that time, stegosaurs and allosaurs roamed the Earth, although no evidence of those particular carnivorous giants has been found in the Los Angeles region. Jurassic slate is weak, crumbly, and difficult to build on. Although Caltrans can’t ignore it, we can. Let’s consign this crummy rock to our rearview mirror and continue on our tour.

As you ease under the newly rebuilt Mulholland Bridge and crest the top of the Pass, the San Fernando Valley spreads out before you. This is an area where the old Santa Monica Slate is overlain by a thin, younger cover of weak, sedimentary layers called the Modelo Formation. These rocks were deposited during the Miocene epoch between about 12 and 6 million years ago.

Caltrans engineers have engraved wide, gently sloped roadcuts in the Modelo Formation near the top of the pass to reduce the possibility of landslides, and they’ve put up retaining walls farther down the pass to hold back some of the deeper and steeper cuts. The sandy and silty rocks in the Modelo Formation present an additional challenge: They tend to accumulate groundwater. All mountains contain groundwater. Usually, it leaks out naturally in springs and ground seepage. But retaining walls seal the springs, so the water cannot escape. Over time, the water pressure builds up and can cause walls to fail, so here the engineers have placed drain pipes deep beneath the retaining walls to relieve the pressure.

The Modelo Formation is tilted so that its thin layers slope toward the San Fernando Valley, like shingles on a peaked roof. Imagine if those shingles, sloped at an angle of about 25 degrees, were cut somewhere in the middle. The unsupported layers above would slide down off the roof. Now picture those shingles as thousands of tons of rock, sliding onto people’s homes, and you understand the potential problem. 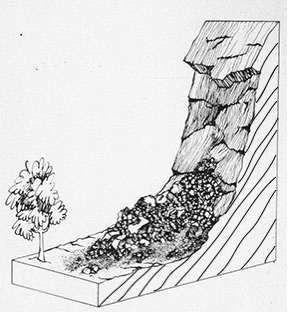 Sadly, that is exactly what happened following heavy rains in January 1952. Massive landslides caused $7.5 million in damage to hundreds of recently built homes. As a consequence, the City of Los Angeles adopted a tough ordinance that required a geologist to inspect every hillside lot, and for the surrounding rocks to be bolstered with a technique called keying and benching, which essentially locks each layer to the one below it. Other southern California municipalities soon adopted similar statutes, and today L.A.’s hillside homes are much safer.

As you head toward the 101 or take the 5 toward Valencia, you leave the Sepulveda Pass and our tour comes to an end. But before you flick on the radio or succumb to the siren song of your smartphone, think back for a moment to those enormous retaining walls. Maybe you noticed that the landscape engineers went to great pains to stamp the concrete with a faux-stone pattern they say is meant to resemble the structure and color of bedrock along the pass. I appreciate their attempt, but honestly, I don’t think the result looks anything at all like the dull, ancient Santa Monica Slate with its Jurassic pedigree. Nor does it resemble the warm, tawny Cretaceous sandstone, or the slippery Modelo Formation.

But give those human-made rocks a few million years. Geologists of the future may be able to determine whether the landscaper got it right even if the color has faded and the faux pattern has eroded. That’s because California’s coast is sliding along the San Andreas Fault toward Alaska at the rate of about two inches per year—taking the Caltrans walls (and most of Los Angeles) with it. In our geologic future, the surrounding plants and animals will no doubt look very different, and we ourselves may be mere fossils, but those grand retaining walls will be available for re-discovery somewhere beneath the Aleutian Islands. I bet they’ll still be intact.