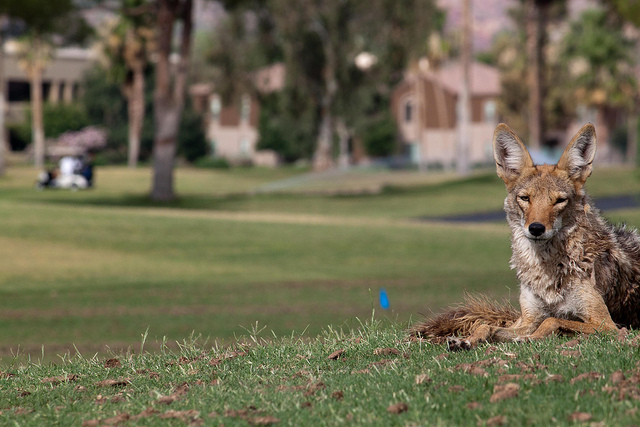 The coyote, our wily, resourceful neighbor

The Western Scrub-Jay, our health barometer

The peacock, non-native but ever-resourceful

Put me down for coyotes, too

The bald eagle symbolizes the United States. The grizzly bear (though no longer found here) emblemizes California. But in spite of Los Angeles’s vast wilderness areas—from mountains, canyons, and lakes to the Pacific coastline—we lack an official animal icon. Can a single creature stand in for our area’s history, outlook, culture, and spirit? Would that living thing be a mammal, a bird, a water-dweller—or perhaps an insect? In advance of “Does L.A. Appreciate Its Wild Animals?”, a Zócalo/Grand Park event, we asked some locals the following question: What should be the official animal of the city of Los Angeles?

The coyote, our wily, resourceful neighbor

With trepidation for the safety of my beloved small dogs, I nominate the ubiquitous coyote to be designated the official animal of the city of Los Angeles. Coyotes are in our midst. Their population has exploded. They’ve arrived from their dwindling habitats in search of food. And they have every right to live and thrive.

The presence of coyotes in Los Angeles keeps us mindful. Why? Everywhere human encroachment has overtaken the natural habitats of other species. Hungry elephants raid crops; big cats have little space to roam; sea turtles have dwindling nesting beaches; and coyotes’ cousins, wolves have no place to go. It’s a world crisis. And coyotes are Los Angeles’s issue.

Coyotes remind us of the importance of preserving our natural habitats. They are wily, unafraid, and have amazing adaptability—skills they’ve developed to survive in a shrinking space. Like people everywhere we need to co-exist with our wild neighbors. We must preserve areas where they can live out their natural lives. Coyotes’ presence is a constant reminder to tread lightly and with respect on this earth.

So many of us are fearful of coyotes’ intrusions in our lives. It’s imperative that we are vigilant in protecting our children and our pets from coyotes, but we must protect them from speeding cars as well.

I believe in ahimsa—loving kindness and respect for all creatures—coyotes included. So I nominate them to be L.A.’s ambassador and to keep us mindful always.

Karen B. Winnick is an author-illustrator of children's books. She serves as President of the Board of Commissioners for the Los Angeles Zoo and the Board of Directors of Fauna and Flora, International, a conservation organization with 140 projects in over 40 countries.

The Western Scrub-Jay, our health barometer

Western Scrub-Jay. First of all, it isn’t a Blue Jay—the one with a crest on its head found in the Eastern United States—so right away just knowing “our” vocal blue bird will give residents a bit of local knowledge to impart to recent arrivals. Native to the chaparral, scrub, and oak woodlands of the Los Angeles Basin, yet tolerant of people and adaptable to the city if there are enough dense bushes, this species is found all over L.A., from San Pedro to Chatsworth.

Western Scrub-Jays are smart, like other corvids (members of the jay and crow family). They are known for “scatter-hoarding,” a behavior in which they can hide up to 6,000 individual food items, which they can re-locate using a highly developed spatial memory up to 250 days later. They can train humans to offer them food by rewarding them with daily visits and even perching on their hands. But these birds aren’t invincible, and the species’ susceptibility to West Nile Virus and the Los Angeles trend of developing nearly every square foot of a real estate parcel and then paving the rest is gradually pushing this charismatic species out of the residential neighborhoods where it has kept us company for so long.

Let’s make Western Scrub-Jay the official animal of the City, and ensure that even our densest neighborhoods maintain enough green space and vegetation for this original Los Angeles resident to make a home, thereby serving as a living barometer of the health our environment.

Travis Longcore is Associate Professor of Spatial Sciences at the University of Southern California. He is also the Science Director of The Urban Wildlands Group and the President of the Los Angeles Audubon Society.

The peacock, non-native but ever-resourceful

Los Angeles has always had a wonderful connection with wildlife, and nature surrounds the city—from Griffith Park to the canyons, the Santa Monica mountains to the Pacific Ocean. I recently traveled to West Yellowstone which only increased my love and appreciation for our local fauna, and made me re-think my perception of it.

I had spent weeks planning for this trip: buying gear, watching fly fishing videos, learning knots, re-reading Brautigan. I quizzed the owner of a Yellowstone fly fishing shop about where he goes to fish. “The mountains, the coast,” he answered. In hindsight, my questions seem naïve. It didn’t occur to me until I was driving from Bozeman through the Montana wilderness that he had actually meant that he stays within miles of his shop. He didn’t go anywhere. I suddenly realized: Los Angeles is also its own kind of innate wilderness. Perhaps its wild spaces should be taken just as seriously as sectioned off national parks and protected lands.

This idea expanded as I talked with preservationists and local Yellowstone activists. When I mentioned that I was from Los Angeles, I was a little surprised to hear them respond with admiration: they spoke of  how beautiful the wildlife is in Southern California and how “lush and unique” the terrain is. They were fawning over my environment with as much passion and curiosity as I was feeling toward theirs. I returned to Los Angeles with a refreshed appreciation for its wildlife and natural element.

The official animal of the city of L.A. should be the peacock because it is one of the most beautiful birds, yet it’s often very misunderstood. It’s a bird, but it doesn’t fly. It’s resourceful: it has little means of defending itself, yet it has adapted to predators and its surroundings. Most notably, even though the peacock is not native to Los Angeles, it has made a home here. It’s a symbol of diverse origins. Just like our people.

Put me down for coyotes, too

Coyotes, Canis latrans, are beautiful, intelligent, and resourceful animals that are present and visible throughout Los Angeles. Coyotes take advantage of urban and suburban areas, but they are also comfortable in, and in fact prefer, the amazing natural regions all around, and within, our city limits.

Coyotes have been in Southern California since before the city existed. Visible, especially at dusk or dawn crossing a street or running into the hills, these animals are also often audible with their choruses of barks and yips, as they communicate to members of their own and other groups about who’s where (and who knows what else!). Coyotes are present in the culture of L.A. as well, going back to Native American times, but also often appearing in literature, film, or TV. I love the moment in the Michael Mann film, Collateral, where Jamie Foxx and Tom Cruise are driving around in the middle of the night and are suddenly brought to a halt by a coyote crossing an L.A. street.

Coyotes can get a bad rap in L.A. They can be seen as highly urban animals that roam the streets, subsisting on garbage or hunting cats and small dogs. Although these things certainly do occur, the truth is very different. Coyotes are adaptable to many different ecosystems and landscapes across the continent, including urban ones, but they still live largely in natural habitats and on non-human foods. Although individual animals may be more urban, on average the coyotes we’ve studied spent 3/4 of their time in natural areas. Three-quarters of their diet consisted of natural foods such as fruit, insects, rabbits, ground squirrels, and gophers. In the very rare instances when coyotes do become used to, and even aggressive towards people, it seems to be when they have lost their healthy fear of us. This happens especially if they are being fed unintentionally. The effect is worse if they’re fed intentionally.

Long-time residents of the city understand that coyotes are present and have learned how to coexist with, and even enjoy, them.

Seth P. D. Riley, PhD. is a wildlife ecologist for Santa Monica Mountains National Recreation Area, a unit of the National Park Service, and is considered an urban wildlife expert. He is also an adjunct professor at UCLA.