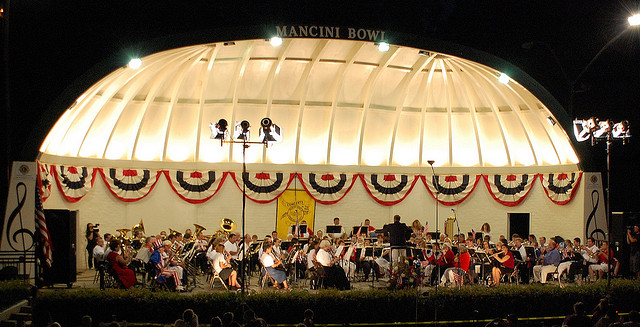 Modesto has been one of the most evanescent of California cities. It has survived floods and busts, and some jarring booms. Ernest and Julio Gallo opened their winery here in 1933. From 1970 to 2000 the population of this Central Valley town tripled to 188,000. The real estate crash hit Modesto hard and early, and by 2010 Modesto had the nation’s third-highest rate of mortgage defaults, with one in every 14 homes in foreclosure. This year, high unemployment made the city number five on the Forbes list of most miserable cities.

Through it all, the MoBand plays on. Formed in 1919, when Modesto was a modest town of 4,500, the all-volunteer band is open to anybody with an instrument. And it has played a series of free concerts every summer since its founding.

The MoBand has also provided the music for major California events. It played in the parade for the opening of San Francisco’s Bay Bridge in 1936. It played for the opening of the Golden Gate Bridge six months later. And three years ago, when the economic downturn forced the city of Modesto to stop supporting the band, the band members figured out how to fundraise (in their own fashion) and kept on playing Sousa marches to crowds of as many as 10,000 (if the evening is cool) at the city’s Graceada Park. In a town-city where change has been a constant, MoBand is an institution, and I wondered how they did it.

The man who has conducted the group since 1979—George Gardner—was on vacation when I visited Modesto recently. So I sat down to discuss the band’s longevity with Matthew Cover, its assistant conductor and manager. Cover, a youthful man in his 40s, has “only” been with MoBand for 31 years. We met in the back of the Methodist Church, where he directs the adult choir and the hand bells. He also conducts five student concert bands and two jazz bands in the school system.

Cover told me the MoBand started with a small but loyal audience. “And it just sunk in and stayed,” Cover said, throwing his arms wide. “Now it’s a big thing.”

The MoBand’s origins story feels lifted out of The Music Man, but without any con men. More than 90 years ago, a local bandmaster named W.W. Higgins decided that Modesto’s boys were bored, and he formed a band of 11 of them. Two years later, Higgins suddenly died. His place was taken by Frank “Proof” Mancini, a famous clarinetist from San Francisco who said the Central Valley reminded him of his native Italy.

Over the years the band grew, women joined, and it opened up to all ages. But the unceremonious, do-it-yourself character of the band endured. For the first 30 years, the performers and audience members brought their own chairs from home.  In 1949, the town built a bandstand in the park and hung up some lights. As the concerts continued year after year, families began to lay informal claim to parts of the grassy area around the stage. Cover’s family still sits in the same spot chosen by his great aunt Betty Belle Smith more than 50 years ago. For the band’s Thursday night concerts, some families put out blankets already at 6 a.m. Wednesday. When the show finally starts, it’s a giant picnic for 5,000 or more. Or you could call it a town living room. In fact, Cover once saw a family bring their living room furniture to the show, because the concert coincided with cleaning their carpets. And the whole town gives back: The mayor shows up even though Cover says nobody talks politics or business, and the police set up a trailer offering free hotdogs and water.

If you want to join MoBand you must be at least 13 years old, have an instrument, and show up to practice on Monday and Wednesday nights. Then you can play in the Thursday night concerts. There is no audition, and, as long as you don’t miss the practices, you won’t get thrown out. In the summer, at least 100 musicians show up to play. The oldest player is 90. There are high school kids and people with PhDs. “We have people who’ve spent 60 years playing third clarinet, and then we have high school kids trying to be first,” said Cover.

The existence of an open band might on its face seem trivial, but the band connects its members to the formal and informal networks of Modesto. That’s part of the reason the band has survived so long: There’s always some connection from band players to town power players—in the police, or the planning department, or elsewhere—who can help in a crunch. Cover calls the band a multigenerational family. “Whenever I meet a parent and they say their kids are in the band we’re best friends,” he said. At the same time, the ability to read and play music connects Modesto’s citizens to the wider world of music—and some who started in MoBand have played as far away as Europe and China.

MoBand is part of a larger tradition of support for music in the Modesto schools. Its existence is one reason why, when the school district has tried to save money by cutting music, the townspeople showed up in huge numbers to fight the cuts.

For most of its life, MoBand raised a few thousand dollars each year for sheet music. The town of Modesto provided sound and lighting and videotaped the performances and broadcast them on public access. Then, three years ago, the city’s budget troubles put a stop to the city’s contributions. The volunteer board of MoBand met to decide what to do.

They discussed passing the hat at concerts, but soliciting donations was not part of the atmosphere the board wanted. Selling tickets was unthinkable. Instead, the band printed a program with ads, held a fundraiser with local restaurants, and sold T-shirts. The band has managed to cover the cost of sound and lighting, and they hope to find an amateur videographer to bring back the public access broadcasts.

“There’s not enough things in the community that are for families and free and open for anybody to come to,” Cover said. “We want people to come and hang out and let their kids run around and not worry too much.”

“It just goes and goes,” says Cover, windmilling his hands. “The circles start. It’s a great way to connect communities.”