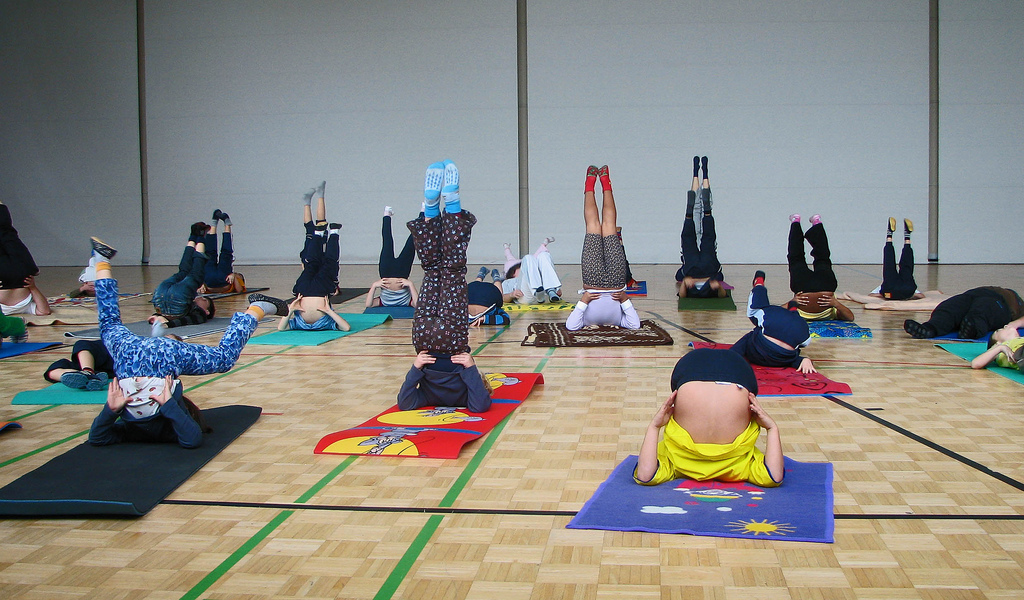 Is teaching yoga to kids a form of religious indoctrination? About a month ago, a California judge ruled that yoga could be taught at the Encinitas Union School District without violating the constitutional separation of church and state. But the plaintiffs will probably appeal the decision. The story hit home for me, because I’ve been one of those skeptics of yoga—and I’ve also been a yoga instructor.

My grandparents were ministers in a Pentecostal church, and I grew up in a very conservative household. I never went trick-or-treating. (I was told Halloween was for devil worshipers.) My grandparents reamed out my mom and dad for allowing me to read Harry Potter books. When it was time for college, I went to Pepperdine University, a Christian school in Southern California. So when a new-agey college friend invited me to a session of yoga, the very idea conjured up fearful images of drugged-out people chanting in a strange tongue and worshiping statues of deities with six arms.

But I was balancing a full load of classes, sorority drama, frat parties, a boyfriend, volunteering, interning, and waiting tables at nights to make rent, and I often found myself conflicted, scrambled, bloated, tired, and rushed. In short, I was desperate for any sort of tranquility. So I resolved to try yoga but to remain vigilant so as not to get suckered into joining a cult.

My first class was not what I’d expected. It was fast-paced, and a Rolling Stones playlist was on the stereo. As “Wild Horses” played, I slipped into a mild trance and felt light and happy. Then I felt apprehensive: maybe they were trying to lure me in. Instruction was mostly in English with a few Sanskrit terms tossed around, like “chaturanga dandasana,” which is basically a fancy push-up. I was captivated by the calmness that settled in me during class. I became a cautious regular.

Over time, I stopped fearing yoga. It taught me to be more mindful and aware of my self, to take better care of my body, to be slower and more intentional, to find stability, and to be grateful, graceful, and playful.

My once-or-twice-a-week, watered-down, Westernized yoga practice is an important part of my life. Maybe I’m brainwashed and addicted to the emotional adjustment and the endorphins from the killer workout. But it doesn’t seem like a harmful addiction. It is a part of the week when I can tune out the world and tune in to myself. I can turn off the constant to-do list that’s rattling in my head and rely on muscle memory to lead me through 90 minutes of aerobic bliss.

In 2009, when the state of California faced severe budget cuts, I heard that some elementary schools in my Los Angeles neighborhood might have to drop their physical education classes. I thought I could do something small to help fill the gap, so I connected with a teacher from a local school and started going in once a week to teach the kids yoga. A few of my friends told me they wanted to help. So we organized, partnered with experts, and trained about 20 volunteers to teach twice a week in several classrooms in Southern California. The process was formal: All of the volunteers were background-checked and fingerprinted. We sent the kids home with information sheets and permission slips.

We were careful from the beginning to steer clear of religious language, and we kept classes focused mainly on physical activity and healthy eating. Still, we delved a bit into emotional health; it was one of my favorite parts of the curriculum. We also shared our lessons with teachers, hoping they could incorporate some of them into their classes. For one class we brought in slate boards and paintbrushes and had the kids paint a few strokes on the board with water. The kids were told to be quiet and still and watch closely as the water evaporated and the picture disappeared, and then slowly raise a hand when it was completely gone. We taught them that the feelings produced by the exercise were calm and focus. That way, the next time a teacher or parent asked them to calm down or to focus, they would know exactly what to do.

The second year, people seemed even more pleased with the program, so much so that the kids asked for yoga homework assignments! We gave them handouts once a week to complete with their families. Topics covered were things like, “I move and breathe together, I move in different directions, I move from my center, I move with finesse, I rest when I need to and drink plenty of water, I eat fruit and vegetables.” There also were a few more emotion-heavy topics like, “I feel my feelings and let them go” and “I choose my actions.” The lessons were about listening to your body, making healthy choices, and learning to manage your emotions.

In time, these take-home lessons caused problems. Teachers told us that some parents were starting to complain about yoga in school. I suspect they were uncomfortable with some of the assignments that focused on yoga’s emphasis on emotional health.

To head off problems, we scheduled an information session for parents to talk about the concerns being relayed to us. We prepared about 50 family activity packets and brought an equal number of USDA-issued healthy eating booklets. We also equipped ourselves to field questions about the religious connotations of yoga. Then, after school let out, we waited outside the classroom for the parade of concerned parents. And waited. No one showed up. We were left to conclude they weren’t that upset.

Ultimately, we decided to tell parents their kids could opt out of the program. Some did, but most didn’t. A few who stayed in class got offended once in a while and complained, but we’d always try to address their concerns.

Is yoga a sly form of religion? I don’t think so. Even in its purest form, yoga is not really a religion; it is a practice that is prescribed by various religions as a means to achieve inner peace. But yoga does embody certain values. They include harmlessness (ashima), truthfulness (satya), and greedlessness (aparigraha). We never used Sanskrit terms in class (apart from “yoga”), but we incorporated these ideas into lessons in the form of kid-friendly ground rules: being nice, taking turns, telling the truth, and sharing. The yoga we brought to schools taught that emotional, physical, and mental health is deeply important. And it taught that being a good person is part of a healthy lifestyle. None of that seems very divisive to me, but schools are always a battleground for value wars.

Eventually, because of jobs and moves, I ran out of time to keep the program going. Now I’m just a student again. But I like to think our classes were good for the kids who took them. And, given the chance, I’m always happy to suggest an exercise to kids, like creating a pose inspired by your favorite vegetable and staying balanced for a minute or two. Is standing on one foot and acting like a carrot religious? I doubt it.