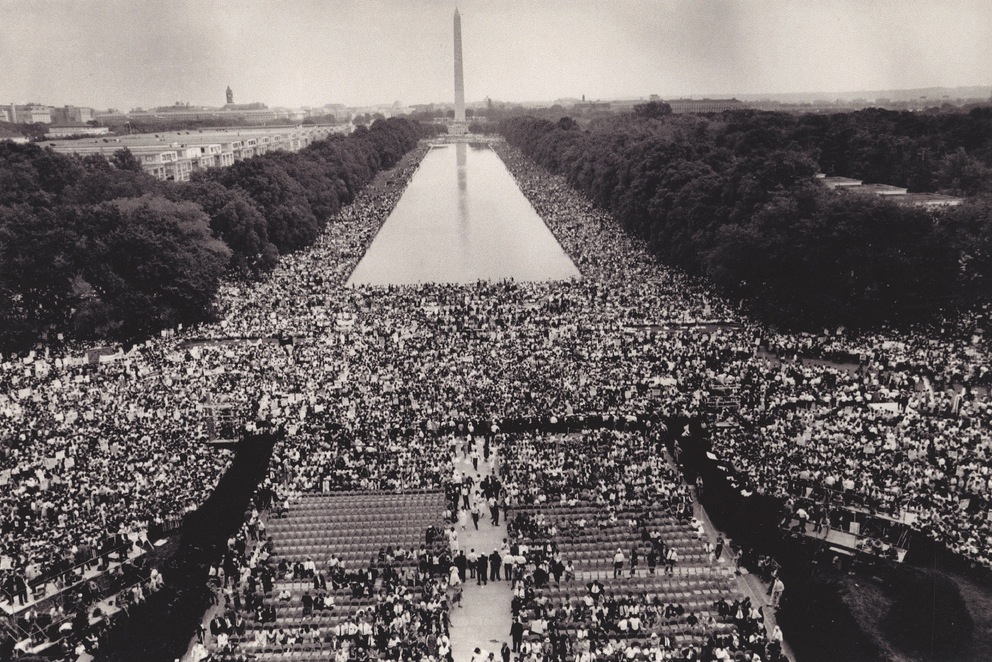 In the days and weeks following the March on Washington for Jobs and Freedom in August 1963, the nation’s newspaper editorial pages breathed a collective sigh of relief. The papers had predicted violence—from both marchers and from opponents of segregation—but it had not come to pass. Indeed, the scene was just the opposite. As Russell Baker wrote in The New York Times, “The extraordinary politeness that characterized the day … [and] the sweetness and politeness of the crowd may have set some sort of a national high water mark in mass decency.”

Fifty years on, we remember the March, but we have mostly forgotten the deep skepticism—and even fear—that surrounded it. The March was controversial beforehand, and the stories immediately after the March—of an event that went better than expected—did not prove to be the final word. They merely began a process of reinventing the meaning of the March—a process that continues even today.

Arguments before the event contained no small amount of racism. Northern editorial writers contended that there were other, less radical and less dangerous ways to pursue a civil rights agenda. To them, civil rights leaders had taken a considerable—and perhaps foolhardy—risk in organizing the March.

But in the aftermath of the March, editorial writers changed their tune. They praised the decorum of the crowd and expressed relief that the marchers were both black and white. The unmistakable message: Thank goodness this wasn’t an angry black mob. As the Worcester, Massachusetts Gazette put it, by nature of its size, the assembled crowd “carr[ied] an implied physical threat.” That there hadn’t been a riot in response to such a threat was offered as proof of Americans’ good character. An Elkhart, Indiana Truth editorial marveled that “the civil rights throng was orderly and well-behaved.” And the Wall Street Journal quoted a report that described the marchers as “a vast army of quiet, middle-class Americans, well dressed and kindly disposed.”

It was more than the look of the marchers that caused editorialists to praise the March on Washington. By emphasizing speakers’ messages of white/black unity over demands for economic freedom, editorials painted the event as something that could be embraced by mainstream Americans. The event was neither black nor radical, but instead took a middle-of-the-road position, these papers argued. Editors at the Columbus, Ohio Citizen-Journal were surprised that the event “did not sound, essentially, like a Negro demonstration at all”—whatever that meant—but was instead “phrased in the still-familiar catchwords of American revolution and independence.”

The surprise wasn’t limited to the papers. Participants in the Birmingham campaign in the months before the March had been subject to constant violence, and many weary activists worried that the March on Washington opened the movement to further assault. To place so many of the civil right’s movement’s supporters and leaders in a public, open area seemed ill-advised. That there was no violence rendered the event a success for some.

For others, the huge turnout for the March demonstrated the strength of the movement to a foot-dragging and sometimes reluctant White House and Congress. Indeed, March organizers described the event as a “living petition”; with so many signatories it was hard for legislators not to take notice. The event focused the nation’s attention on the Civil Rights Act, which was passed the following year in a strengthened form.

But the elation of the March’s aftermath was tempered by concern. The legislative demands of marchers included not just anti-segregation and forceful voting laws, but also a fair employment practices act, an increase in the minimum wage, a guarantee of adequate housing and education, and the creation of a federal job training programs. These were even more difficult issues for Congress than civil rights. And even as they praised the civil rights message of the March, editorialists continued to oppose this economic agenda.

This aspect of the March began to be rewritten out of the history of the demonstration beginning on August 29, 1963. Today, we don’t hear much about housing and education as issue in the March, or the fact that the words “for Jobs” appeared in the March’s full title.

All this seems to have been forgotten by a public eager to view civil rights as a done deal. At the same time, the more difficult and dangerous racial confrontations that followed 1963—particularly the threat of the black power movement—have made the March seem safe in American memory in a way that it never was in 1963.

As we celebrate its anniversary and all that this day represented, it’s important to restore our collective memory of what the March actually was: a risk. It’s worth remembering, too, that the media and the public—and not just ardent segregationists—failed to embrace the March back then. And in congratulating ourselves today for the progress made in the past half century, we should not forget that we are judging ourselves only by some of the demands made by the marchers 50 years ago.