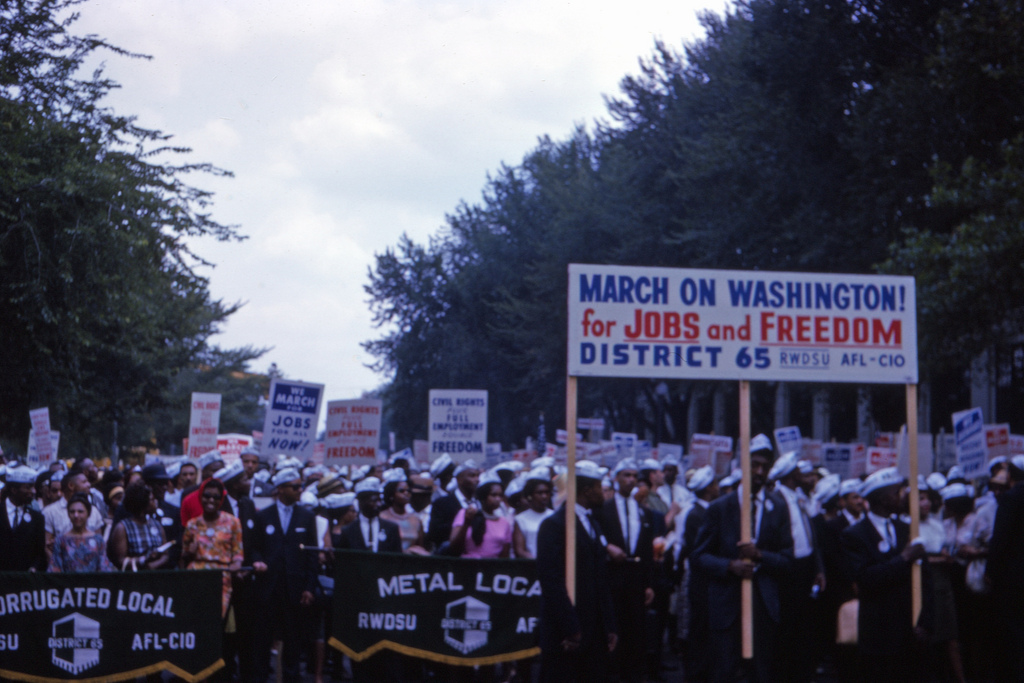 Through the years, when I tell people that I covered the 1963 civil rights march on Washington, they often ask, “Did you know?”

The answer seems to be yes.

I was lucky enough this week to obtain a copy of something I wrote on August 29, 1963, and the fuzzy microfilm shows that I knew something monumental had taken place.

Reporting on a delegation of marchers from New Jersey, I wrote, “Weary and footsore, some 1,500 area residents returned last night from the Washington March for Freedom and Jobs exhilarated with the knowledge that they had participated in what one woman described as ‘the most dynamic demonstration in the history of the Civil Rights struggle.’”

I know now that that hot August day in Washington changed my life, and that the massive demonstration by more than 200,000 people was just the beginning of a march toward equality among races. It’s a march that continues today.

Everyone who was there has a special memory. Mine is of a career-changing decision to talk my way into covering the march.

I was a teenage summer intern at a New Jersey newspaper, the Perth Amboy Evening News. I had just completed my sophomore year at Monmouth College and, with mentoring from a journalism professor, had seized the chance to work a shift each night that began at 7 p.m. and ended at 3 a.m. I wasn’t covering big news and never saw the editors. But I had seen reports about a huge civil rights march that was coming up in Washington, D.C.

One night, at the end of my shift, I timidly left a clipping and a note for the paper’s editor, Ken Michael: “Don’t you think we should cover this?”

He called the next morning. “So you want to cover this, do you?” I said yes. He paused a moment, then said, “Well, you can go, but it can’t cost us anything.” It was my first lesson in journalism economics.

I telephoned the local NAACP chapter and asked if I could go along on their bus. They were glad to accommodate me.

There had been predictions of violence, and I didn’t tell my mother I was going, because I knew she would worry.

Oddly enough, I was neither worried nor nervous. I was excited to have such a great assignment and, with the confidence of youth, I knew I could handle it. But the demonstrators must have had residual fears. Washington was an armed camp that day. One young woman on our bus had been jailed for 21 days for demonstrating in Virginia.

We left before dawn in an atmosphere of excitement. There were 25 busloads from our one county, and, as I would write in my story, “They were Negro and white, young and old, Jews, Catholics and Protestants, professional people as well as unemployed boarding the bus together with a single purpose, to demand the freedom and equality promised them in the constitution.”

Most of the buses, I reported, were air-conditioned and comfortable. But a few school buses were pressed into use, and no one complained.

“There were no thoughts of resting on the way,” said one woman I interviewed. “We were so excited that we talked and sang all the way.”

The songs they were singing were the same ones that demonstrators chanted softly as they marched. Black passengers on our bus taught the whites the lyrics to the famous songs: “We Shall Overcome” and “Oh, Freedom.”

Those on the bus were committed to the cause. I was the observer.

But that day, no one who was there could remain immune to the powerful emotions. I stood near the reflecting pool at the Washington Monument linking arms with strangers, black and white, joining in the songs, sitting on the grass, and hearing speeches by entertainers and civil rights leaders.

Amid the enormous crowd, I managed to find my way to the press tent, where I encountered my journalism professor with a group of students. He was proud to see that I was there as a working journalist.

I wrote my story when I got back. Without computers or cell phones, I had to scurry, but I made deadline for the afternoon paper of August 29.

It was my first front-page byline. My destiny in journalism was sealed. I would go on to cover many more historical events over the next half century. I covered Robert F. Kennedy’s assassination, the evacuation of Vietnam to Guam, and dozens of huge high-profile trials from Charles Manson to Michael Jackson. The trials of black activist Angela Davis and football hero O.J. Simpson raised issues of race and racism that have not disappeared from our public discourse. And my stories on the trial of Los Angeles police officers acquitted of beating black motorist Rodney King preceded one of the worst race riots in Los Angeles history.

Those close to the podium where King spoke on August 28, 1963 reported that, at the end of his “I Have a Dream” speech, someone in the crowd shouted a salute to “the next president of the United States.”

What a dream, I thought. A black president? I wondered if it could ever happen.