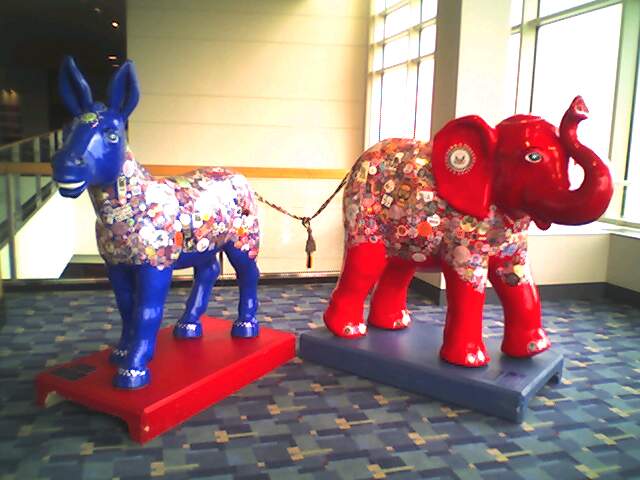 As Washington contemplates intervention in Syria, pundits will undoubtedly seize on the high-minded debate, one that is not following predictable partisan lines, as a model to emulate across a range of other issues. There’s a perennial yearning among Washington’s punditocracy, after all, to have politicians repudiate “the extremes of left and right” and search for common ground. The cliché is that candidates for public office must “run toward the center” after appeasing the “extreme” constituencies within their own parties. Those who take this perspective often lament that political leaders are stuck in primary mode, governing on behalf of their base.

This analysis assumes that American politics has an obvious center, in which both sensible policy positions and swing voters may be found. But the more you look for this legendary center, the harder it is to find.

I plead guilty for having succumbed to the lure of the “center.” In 2001, I co-authored with Ted Halstead The Radical Center, a book that called centrism a “shallow mantra in recent American politics” but attempted to reinvigorate it with use of “the word radical—in keeping with its Latin derivation from ‘radix,’ or ‘root’—to emphasize that we are interested not in tinkering at the margin of our inherited public, private, and communal institutions but rather in promoting, when necessary, a wholesale revamping of their component parts.” We proposed a combination of expanded public funding in many areas with greater individual choice—for example, nationalizing much of K-12 finance in return for a degree of school choice. However, our attempt to provide the term “radical center” with substance in the form of a modernized version of the New Deal failed to make the term take hold in popular usage.

If the political center means nothing more than the mathematical midpoint between the policy positions of Democrats and Republicans, then it is a fluid concept, like the center of gravity of the U.S. population, which has moved from Kent County, Maryland in 1790 to Texas County, Missouri, in 2010. This kind of notional “center” does not reflect any particular constituency or worldview. As political scientist Jacob Hacker and others have documented, the Republican party has moved far to the right in the last generation, whereas Democratic positions on most issues have remained largely stable. If “the center” is the midpoint between the parties, then the center in 2013 must be well to the right of where it was in 1993, just to keep up with the radicalism of Tea Party conservatives.

Attempts have been made to supply the political center with actual content, as a third position in American politics between conservatism and liberalism. The problem is that there are two “centers” in American politics, as John Judis pointed out back in a 1995 article for The New Republic entitled “Off Center.”

One of these two “centers,” identified in the 1970s by the sociologist Donald Warren, is made up of “middle American radicals.” These are mostly white working-class radicals, including many so-called “Reagan Democrats” who supported New Deal liberal economic policies like Social Security and Medicare but were alienated from the Democratic party by its support for civil rights and cultural liberalism.

Judis contrasted this working-class “radical center” with the “moderate middle,” which combines liberalism on social issues with center-right views on economics. It is found chiefly among affluent professionals, managers, and investors. In recent years this “moderate middle” has been called “liberaltarianism.”

Because they were not conventional liberals or conventional conservatives, members of both groups were drawn to Ross Perot’s Reform Party movement in the 1990s. But because the views of downscale middle American radicals and upscale “liberaltarians” are diametrically opposite, the groups discovered that they shared nothing other than alienation from the two major parties. The Reform party was effectively destroyed by the clash between its populist wing, headed by Patrick Buchanan, and a socially liberal, small-government wing headed by former Colorado governor Richard Lamm.

To complicate matters further, in the 1990s, some sought to coopt “centrism” to describe a more modern version of the center-left. In 1998 the British academic Tony Giddens used “radical center” to describe the “Third Way” of Clinton-Blair neoliberalism. “The overall aim of third way politics should be to help citizens pilot their way through the major revolutions of our time: globalization, transformations in personal life, and our relationship to nature,” Giddens wrote in his book Third Way. “Our problems and possibilities are not within the reach of the left/right scheme.”

Speaking for the Democratic Leadership Council (DLC) wing of American liberalism in 1996, Al From and Will Marshall in 1996 made it clear that the Third Way was more about reinventing the center-left for a new age than about centrism for its own sake. “The industrial order of the 20th century, with its great concentrations of economic and political power, is giving way to a new society shaped by the centrifugal forces of the Information Age,” they wrote for the Democratic Leadership Council. “America needs a third choice that replaces the left’s reflexive defense of the bureaucratic status quo and counters the right’s destructive bid to simply dismantle government.”

In recent years, the class-based gap between the two “centers” of politics and public opinion has become even more pronounced. Mainstream journalists and commentators—many of them members of the one percent, by income—treat “the center” unreflexively as what Judis called “the moderate middle” or upscale centrism: liberal on gay rights and immigration, conservative on taxes and social spending.

This kind of “centrism” might best described as “one percentrism,” because it has little support among the other 99 percent of Americans. For example, when it comes to Social Security, eight in 10 Americans prefer to raise taxes to pay for Social Security rather than cut benefits. Support for cutting Social Security is concentrated among the rich.

In a recent study, “Democracy and the Policy Preferences of Wealthy Americans,” social scientists Benjamin I. Page, Larry M. Bartels, and Jason Seawright found that the top one percent of wealth-holders in the U.S. “are much more conservative than the American public as a whole with respect to important policies concerning taxation, economic regulation, and especially social welfare programs.” Despite decades of efforts by billionaire conservative Peter G. Peterson and others in favor of deficit/debt reduction, the divide between elite and majority opinion is particularly striking when it comes to the federal deficit and the national debt, with 87 percent of the rich citing it as a “very important” problem while only 7 percent of the general public thought it was important when compared to more pressing issues like jobs and the weak economy. It is a testament to the distortion of American democracy by the power of rich donors that when majority views contrast with those of the rich, American politicians of both parties tend to side with the rich who provide their donations rather than the many who provide their votes.

Is the political center, then, a will-o-the-wisp, or mirage, that disappears when you approach it? In the past generation, the term “radical center” has been used to describe socially conservative, economically liberal populism; its opposite, socially liberal, economically conservative libertarianism; and the “Third Way” neoliberalism associated with Bill Clinton and Tony Blair in the 1990s. A term so elastic is useless and ought to be abandoned. The related term “centrism” also has little staying power or substance—when compared to progressivism, conservatism, libertarianism, or socialism. In the words of William Butler Yeats, “Things fall apart; the centre cannot hold.”