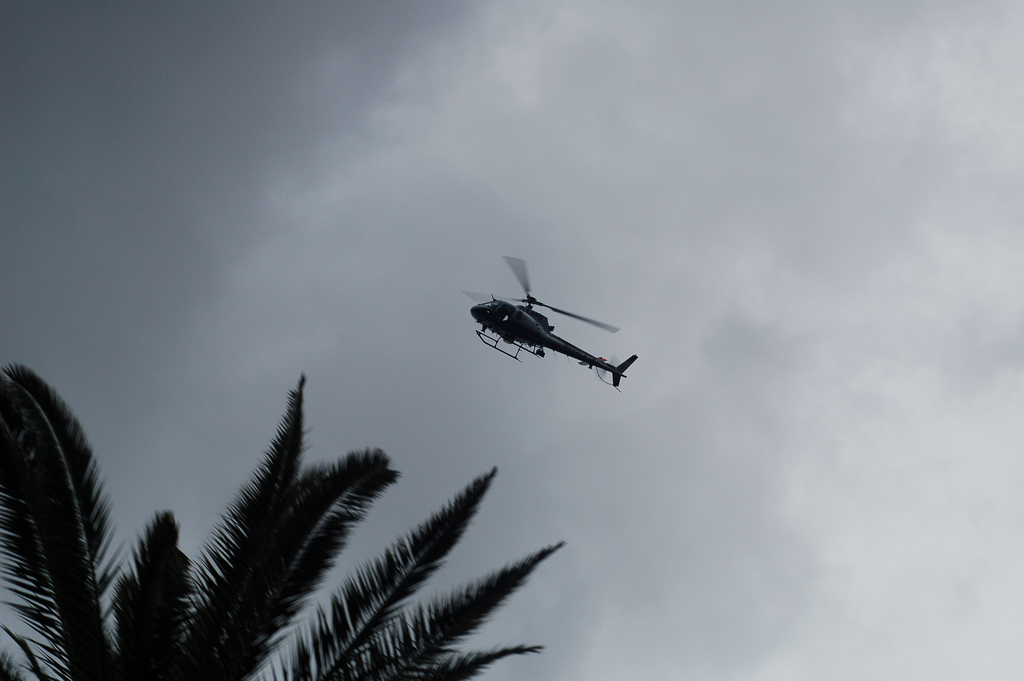 Sometime in the mid-1980s, while he figured out the week’s patrol schedule, the former chief pilot of the Lakewood Sheriff’s Station helicopter patrol program—begun in 1966 and among the first in the nation—informed me of the perversity of helicopters.

A plane with wings, he said, naturally wants to fly. It’ll glide if the engine fails. A helicopter doesn’t glide. With the engine off and blades spinning in “autorotation,” a helicopter just goes down. “Helicopters don’t naturally want to fly,” the chief pilot said.

That aerodynamic fact might please irate Angelenos. Many wish that helicopters didn’t fly, at least not over their neighborhood. Lots of homeowners and a few orchestra conductors (who’ve walked off the Hollywood Bowl stage in protest) are tired of the noisy company of tourist, paparazzo, news, and police helicopters, their jet engines roaring and blades thwacking the night air. Angry neighborhood associations have repeatedly petitioned the Federal Aviation Administration and their congressmen to regulate helicopters out of the local airspace.

My hometown of Lakewood, where I was the city’s public information officer for many years, has its haters of helicopters. Forty-seven years ago, when aerial patrols from the Sheriff’s Station began over the cities in the southeast county, complainers worried about noise and prurient helicopter pilots looking for sunbathing housewives. Some of my neighbors in Lakewood still feel this way, but the rest of us are reassured by the rasping buzz of the Sheriff’s little piston-engine helicopter overhead.

The din from the air should be understood as just another part of the familiar L.A. bait-and-switch. We’re always being pitched a bright future and ending up with a darker, more troublesome one. Personal helicopters for everyone were promised in the 1950s, as a way of taking commuters to downtown and taking the family for a joyride to Palm Springs. Instead, the future turned out to be CEOs and Hollywood boldface names coptering to avoid the rest of us gridlocked on the 405 and the 5.

The ease of that promised future was nearly there in 1954. That year, Los Angeles Airways began offering scheduled passenger flights in a hulking Sikorsky S-55 helicopter. By mid-1955, LAA was flying even bigger and faster Sikorskys to 25 destinations in Southern California, including LAX, Hollywood, Disneyland, Newport Beach, and San Bernardino.

The promise turned deadly on May 22, 1968, when LAA Flight 841 crashed in Paramount, not far from my Lakewood home. Twenty-three lives were lost. Three months later, LAA Flight 417 crashed in Compton. Among the dead was the 13-year-old grandson of the airline’s founder. Bad publicity, financial losses, and strikes brought down the company in 1970.

Today, helicopters are back to serving the rich. To get to LAX by helicopter, expect to pay somewhere between $900 and $2,000 for a flight from one of the 138 registered helipads in Los Angeles, some of them at private homes, a sexy amenity for your mansion. A few of those helipads are required by law. Since 1974, the city fire code has mandated a helicopter landing platform on all commercial buildings that are 75 feet or taller. Los Angeles is the only major American city with that regulation, which is why the towers on Bunker Hill have boringly flat tops. Fire departments like it this way; architects grumble.

The Los Angeles Fire Department flies seven helicopters, all of them based at Station 114 next to Van Nuys Airport and fitted out for fire suppression and as air ambulances. The Los Angeles County Fire Department has an even larger fleet, sized to cover the 4,084 square miles of tract houses, hillsides, mountains, and oceanfront in the county. The LACFD Air Operations Section, with 10 firefighting and rescue helicopters, flies from the Barton Heliport in Pacoima.

The County Sheriff Department’s Aero Bureau flies 17 patrol and rescue helicopters from its base at Long Beach Airport.

The Los Angeles Police Department flies 17 helicopters from the Hooper Heliport on top of the department’s Piper Technical Center at the eastern edge of downtown. Two helicopters are in the air almost constantly, from 8:30 a.m. to 4:30 a.m. The mascot of the LAPD Air Support Division is a glum-looking vulture perched on a patrol car lightbar.

The lazy circles a vulture makes over its future meal are a good metaphor for how a police helicopter works a crime scene. It circles in a tight orbit, generally at three or four hundred feet for better observation, aided at night by million-candlepower searchlights. The lights, the engine noise, and the staccato of rotor blades biting into the air can feel menacing to anyone on the ground, law-abiding or not.

Police and fire helicopters have saved lives, at least. What haven’t saved lives are media helicopters, tour guide helicopters, and Hollywood helicopters. Given the ire whipped up by commercial flights in the still nights of hillside and canyon neighborhoods, it’s not surprising that bills to regulate commercial helicopters have already been introduced in Congress, with even more being threatened. At a pair of contentious public hearings this summer, upset community members complained that there was no traffic cop in the sky to run down and ticket helicopter hoodlums. They demanded altitude restrictions and designated no fly zones. The FAA offered only an inconclusive report that urged commercial helicopter operators to adopt voluntary noise reduction measures.

If the complainers want to pinpoint the moment when the misery began, the early afternoon of July 4, 1958 is the day and time. That’s when the Telecopter—a Bell Model 47 rented by KTLA and fitted with a stripped-down version of the era’s enormous TV camera—made the world’s first broadcast flight. John D. Silva, chief engineer for KTLA, was the inventor. He even risked his life for his invention.

During a test flight the day before the first broadcast, station engineers on Mount Wilson reported that no TV transmissions were coming through from Silva’s helicopter. Silva paused, told the pilot that he wasn’t going to look down, and stepped out onto the helicopter’s skid 1,500 feet over Hollywood. When he had jimmied open the transmitter box, Silva found that one of its vacuum tubes had failed from the day’s heat and the helicopter’s vibration. Back on the ground, he spent the night insulating and cushioning the transmitter; 55 years of car chases, celebrity weddings, disasters, riots, and freeway tie-ups followed.

The purpose of the Telecopter was simple, Silva told the Archive of American Television in 2002: “How can we beat the competition? Why, of course. If we could build a news mobile unit in a helicopter we could get over it all, get there first, avoid the traffic, and get to all the stories before anybody … it’d be a wonderful thing.”

Helicopters were wonderful things once. Admiring boys like me in 1957 watched Whirlybirds, a helicopter adventure series produced by Desilu and syndicated by Viacom. Kenneth Tobey and Craig Hill starred as pilots Chuck Martin and P. T. Moore, who flew a Bell Model 47 from a fictional California field that in real life was the scrappy San Fernando Airport.

TV made the bug-like Bell sort of glamorous and gave some boys the idea that they could grow up to be dashing helicopter pilots. Some of those boys ended up piloting helicopter gunships in Vietnam. Some of them returned from Southeast Asia to fly helicopters over Los Angeles.

One of them was KNBC’s updated version of a Telecopter flown by Francis Gary Powers. He was already famous as the pilot of the U-2 spy plane shot down in 1960 as it passed high over the Russian city of Sverdlovsk. In 1977, when Powers and his cameraman were coming back from covering a brush fire, their helicopter slammed into the Sepulveda Dam Recreational Area, killing both men.

One of the lingering consequences of our wars is a cadre of ex-military pilots, like Powers, looking for work and happy to fly helicopters for tour companies. Zeroing in on the Hollywood sign or the backyard of a pop star for a moneyed tourist is safer than any landing at Bagram Airbase.

I flew a few times in the 1980s in a small helicopter. It had two seats and an engine that looked as if it had come from a lawnmower. It was a Hughes Model 300C, the Volkswagen of helicopters. I wasn’t too worried, even though I knew that it didn’t want to fly.

When I was up there, but only a few hundred feet up, the city was laid out like a three-dimensional map with toy cars and insignificant figures on foot. I was unencumbered, on a lark, and for a few minutes above it all.

Some of the pedestrians below must have heard me and the pilot clattering overhead, but none of them ever looked up, so accustomed had they become to a helicopter’s intrusion into their earth-bound lives.