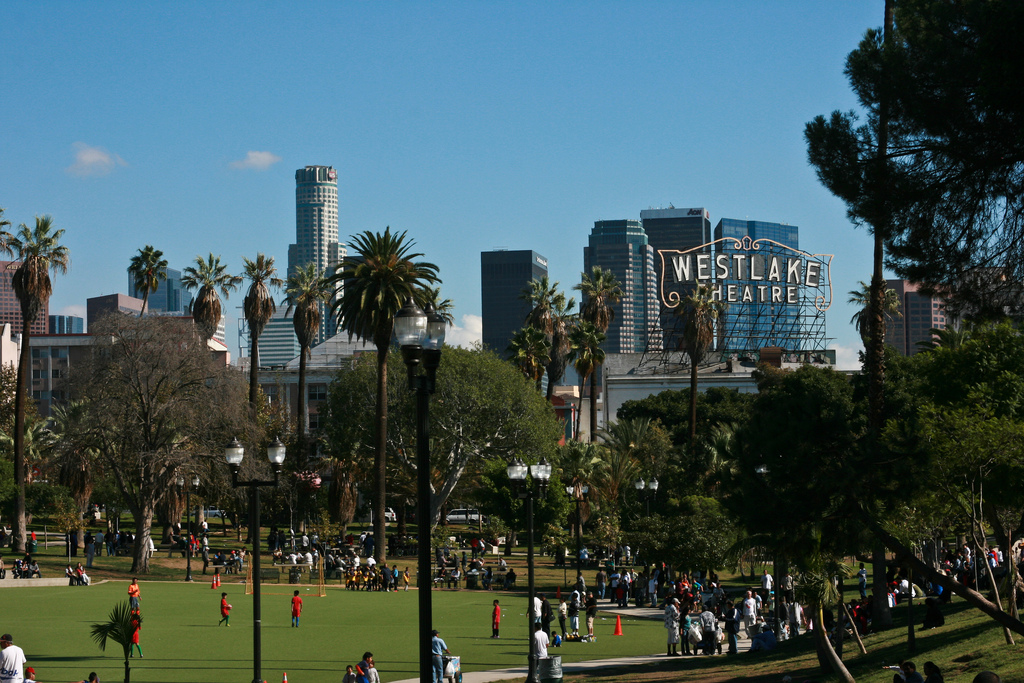 In the summer of 1998, my friend Joe Colletti convinced me to come and work with him in MacArthur Park. The job was to put together a new street vending district that would organize street vendors to sell their goods legally. It was daunting. We shook our heads as crimes—drug deals, drug use, gang members demanding rent from vendors—took place right in front of us. Where are the cops, we wondered? And how could we possibly operate a vending district in these conditions?

Joe, who had been my colleague at the Fair Housing Council of the San Gabriel Valley for nearly two decades, told me that we had never failed at anything, and we weren’t going to start now.

I put on my community-organizing hat and tried to get to know the movers and shakers around the park. I knocked on doors of Neighborhood Watch captains, at the neighborhood churches, at nonprofits, at local businesses, and at City Hall. Most of the people I met didn’t trust me at first, not even the street vendors we were trying to help; I was new and from Pasadena. Who was I, they asked me again? And would I stay?

I didn’t tell them the whole story, but I wasn’t someone who gave up easily. I was born in 1954, in Santa Monica, to Helen Flores and Casiano Romero. They divorced when I was 2, and I lived with three generations of women: my mother, grandmother, and great-grandmother. My great-grandmother, Alicia Gutierrez, who was originally from Michoacan, raised me until she passed away when I was 10. I didn’t realize it at the time, but she taught me about culture, often via food. The best memories of my childhood involve going into the garden in our backyard and picking fresh vegetables and herbs for cooking, and then coming inside where my grandmother would be baking, making atole, a warm corn drink, and plucking feathers to get the chicken ready for cooking.

At 14, I got pregnant and had my beautiful daughter. Instead of stopping me, becoming a mom made me more determined to focus on what was important, which was to be a loving, positive person who contributed to community. In times of struggle and hardship, I tried to learn from mistakes and put my faith in God.

After my husband died suddenly, in 1990, I reevaluated my life and left my position as executive director at the Fair Housing Council. I spent time working in Washington, D.C. on fair housing and traveled to China and to Chiapas, Mexico to work on women’s issues. Then, Joe and I joined forces and established a new nonprofit, the Institute for Urban Research and Development, through which I ended up in MacArthur Park.

Joe and I had never done anything like establishing a vending district before—and we couldn’t find anyone else who had, either. So we put the vending district together ourselves, from scratch. Joe found a designer and a manufacturer to build the vending carts. He also engaged the designer of the Santa Monica Promenade to help in redesigning the vending district. We didn’t want a swap meet feel. We wanted a real cultural hub, a destination that people from all over would want to come and visit!

That meant cleaning up the park, too. Every morning, before the carts would go out, I would go into the park and ask folks—mostly homeless people with shopping carts—to leave in order to make space for the vendors. Each day was a battle. Some of the homeless would become intoxicated and disturb the peace. I would pick up needles and empty wine and beer bottles and ask gang members to please step away to the other side of the park. Eventually, I got a special permit that gave us leverage, which helped. People still ask me all the time if I was scared, but I was never afraid and was never threatened.

I also began organizing community meetings for anyone interested in making MacArthur a safer, more beautiful place. These meetings led to the birth of the Rediscover MacArthur Park Alliance, which combats crime in order to revitalize the park and neighborhood. We got the city’s Department of Recreation and Parks to assign rangers to patrol the park and to help me clear out the homeless in the morning. Eventually, the LAPD partnered with us and patrolled on a regular basis.

As the Alliance worked on the park, Joe and I tried to figure out how to help the vendors make a decent living. In addition to crime, we had a difficult time getting the city health department to approve hot foods. The vendors wanted to sell elotes, champurrado (Mexican hot chocolate), tacos, and hot dogs, but the health department was worried about cross contamination and food poisoning.

We needed a staple that everyone could sell but that would allow each vendor to distinguish their cart. One day, Joe called me and said, “Tamales.” We called a meeting with our vendors—from Guatemala, El Salvador, Mexico, Honduras, and Nicaragua at the time—and Joe proposed that each vendor make tamales from their respective country. They were resistant at first, but opposition disappeared when the health department gave its approval.

Joe suggested that in addition we start a café—also selling tamales—that would make people more comfortable with the vendors and the neighborhood. Joe, an Italian-American, told me that every good Italian restaurant has a “Mama” who comes out to ask how everyone is enjoying the meal. He asked me if I minded being called Mama. I didn’t. Mama’s Hot Tamales Café opened in 2002 by the south corner of the park.

One day that year, I was walking home from work at around 7:30 p.m. My path took me through the entire park—around the lake and through two tunnels—until I emerged at the opposite end from the café. I sat down and looked around and saw families and children playing, happy and laughing. Newly installed lights illuminated the park. It was hard to believe it was the same space I had spent so long battling over with gangs and the homeless.

That same year, William J. Bratton’s arrival as LAPD chief accelerated the improvements in the park. Back in 1998, I had counted around 700 arrests in the park alone, not even including the streets or surrounding neighborhoods. In December 2005, I called the senior lead police officer for the area and asked him how many arrests the department had made in MacArthur Park that year. The answer was zero.

The vending district closed in 2006, so we invited the vendors to come and prepare tamales for the café; they’d be reimbursed for all their tamales that we sold. The café also became a small business training center for local people as well as anyone in L.A. needing the support, guidance, and love it takes to build the confidence to start one’s own company.

In 2010, I was diagnosed with breast cancer, and a year later I underwent surgery. At the end of 2011, I closed Mama’s Hot Tamales Café and took a year off to go through treatments and heal.

Now I’m back in action, with a catering business, Mama’s Hot Tamales. I’m still very involved with community development and economic activities around MacArthur Park. The park has slipped a little bit, and some of the issues we tackled more than a decade ago are back. But trust Mama with her watchful eye: In a couple of years, we’ll see the park return to full strength. We’re not going to start failing now.