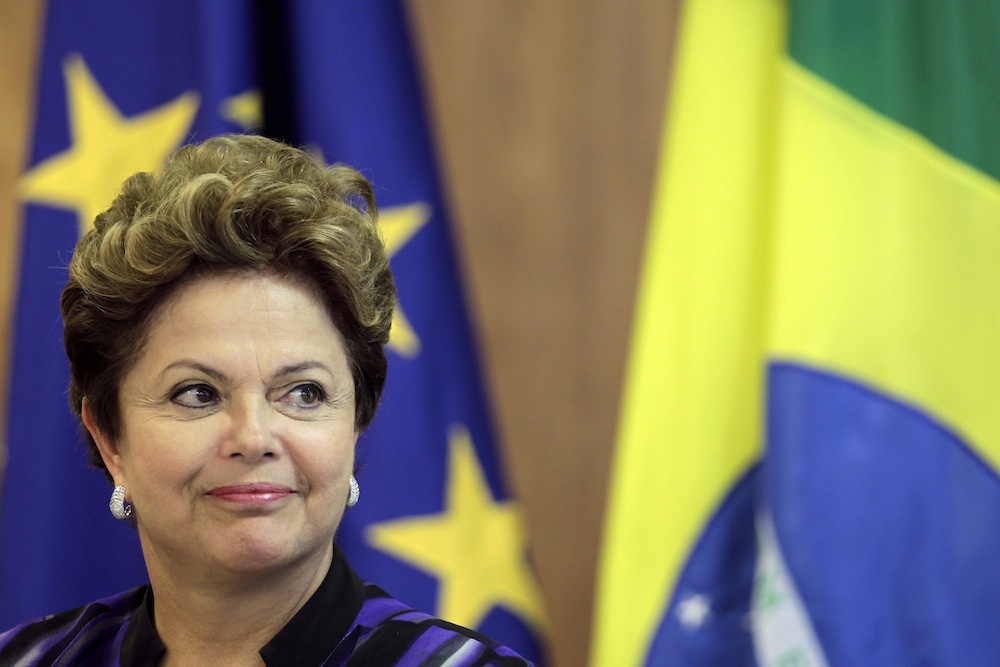 It has become one of the clichés of American diplomacy: The United States welcomes the rise of new powers and wants them to continue rising—especially when those new powers are democracies. The White House’s first-term National Security Strategy committed to “actively supporting the leadership of emerging democracies.” President Obama has repeated this pledge in India, in South Africa, in Brazil. “The American people,” he said in Rio de Janeiro in 2011, “don’t just recognize Brazil’s success—we root for Brazil’s success.”

Unfortunately, the people on the receiving end of those assurances aren’t always convinced.

Last week’s “postponement” of a state visit to Washington by Brazilian President Dilma Rousseff is just the latest reminder: In each of the major emerging democracies, suspicions of American intentions run deep, no matter how frequently or insistently we try to dispel them. For anyone on the alert for neo-imperial plots, Edward Snowden’s revelations of NSA surveillance activities in Brazil confirmed every suspicion of Yankees being up to no good. While Rousseff herself may have hoped to salvage the visit, the reaction among the base of her own party and members of Congress would have made going forward an act of audacious political folly, according to Brazilian commentators, whatever the strategic arguments for or against.

On the face of it, the two vibrant continental-sized republics of Brazil and the United States have much in common: a legacy of immigration, racial diversity, agricultural prowess, a popular culture venerated around the world, a tradition of global sports dominance. But the cancellation and ensuing disappointment feel all too familiar. Every American administration identifies Brazil as an obvious candidate for improved relations before a rockier reality sets in.

Countries that see themselves as leaders of their regions can often find themselves in conflict. Brazil, the only nation outside of North America and Europe with a successful manufacturer of commercial airliners, is a nascent industrial power often eager to embrace protectionist trade policies. It blocked American designs to extend NAFTA into South America (the ill-fated Free Trade Area of the Americas), opting instead to protect the Mercosur trading bloc it dominates. As a farming superpower, Brazil bridles at what it considers the unfair advantages that American farmers get in exporting their goods. And as a leading member of the Nonaligned Movement, Brazil often joins in opposition to the U.S. agenda in institutions like the U.N. Security Council. This in turn has made Washington wary endorsing Brazil for a permanent seat on the U.N. Security Council.

As document after salacious document created a stir earlier this month, Washington insisted that Brazilians had nothing to fear from NSA activity. Yet most Brazilians had a hard time seeing how U.S. eavesdropping on the conversations of presidential advisers or hacking into supercomputers at Petrobras, the state oil company, had helped “not only to protect our nation but protect other people in the world, including Brazilians,” as John Kerry claimed on a visit to Brasilia.

Neither a subsequent meeting between the Brazilian foreign minister and National Security Adviser Susan Rice nor a pair of long conversations between the two presidents was enough to sooth Brazilian indignation. “I want to know everything they have regarding Brazil,” Dilma said. “The word ‘everything’ is very comprehensive. It means all. Every bit. In English, ‘everything.’” The White House eventually expressed “understanding” and “regret” over Brazil’s concerns, (though not over what provoked them). But there was never any chance that Obama or anyone else would order a major change to the way the U.S. intelligence community does business just to keep the visit on the schedule.

For many in Washington, the “know everything” conditions Dilma was laying out for her trip were both preposterous and presumptuous. Skeptics took it as confirmation of their view that Brazil is more interested in grandstanding than in playing a serious role on the world stage. They viewed it as one more example of Brazil’s left-wing leaders using reckless foreign-policy gestures—befriending Iran, enabling Chavista excess in Venezuela—as a means of placating domestic supporters unhappy with the government’s lack of radicalism on economic policy.

Wary Brazilians, meanwhile, took the NSA revelations as confirmation of their worst suspicions of the United States. Former president Luiz Inácio Lula da Silva held it up as yet more proof that “the rich countries are not ready to accept the rise of emerging countries” and accused the United States of “committing a crime against democracy.” Members of the PT, Dilma’s left-wing party, saw in it echoes of Brazil’s dictatorship, which jailed and tortured many PT figures (including Dilma herself) and at points received Washington’s support. Most unsettling of all may have been the snooping into Petrobras, the state-owned oil behemoth: Outlandish fears of foreign plots to steal the country’s resources—oil reserves, minerals, even trees in the Amazon—have a remarkably strong hold in Brazil.

None of this changes the fact that for all the friction, Brazil and the United States have a huge amount to gain from a good relationship—in terms of economic growth, in terms of cultural and educational exchange, in terms of regional and global politics. For Washington, Brazil’s growing middle class represents an important new market, its oil and biofuels stable sources of energy, its formula of democratic development in a large and diverse society a model we admire and want to see replicated.

Yet when it comes to capturing that potential, the old suspicions still prevail. Brazil’s desire for U.S. support for a permanent seat on the U.N. Security Council runs into doubts about Brasilia’s reliability. The United States’ interest in Brazilian markets runs into wariness of foreign competition. The departing American ambassador, Tom Shannon, is one of Washington’s most highly regarded diplomats and has labored valiantly to build cooperation and mutual trust through a flurry of lower-profile programs; yet he spent much of his first year in Brasilia under the shadow of Manning and WikiLeaks and leaves under the shadow of Snowden and Fantástico.

It may be true that the short-term costs of the cancellation are higher for Brazil than they are for the United States. Still, the persistence of these old suspicions, in Brazil and elsewhere, has unsettling long-term implications. We root for the “emerging democratic powers” because we hope they will become our partners in a post-American world that retains the best characteristics of American-led liberal order.

And yet: If not Brazil, if not India, if not South Africa, who will join us in working to sustain it?