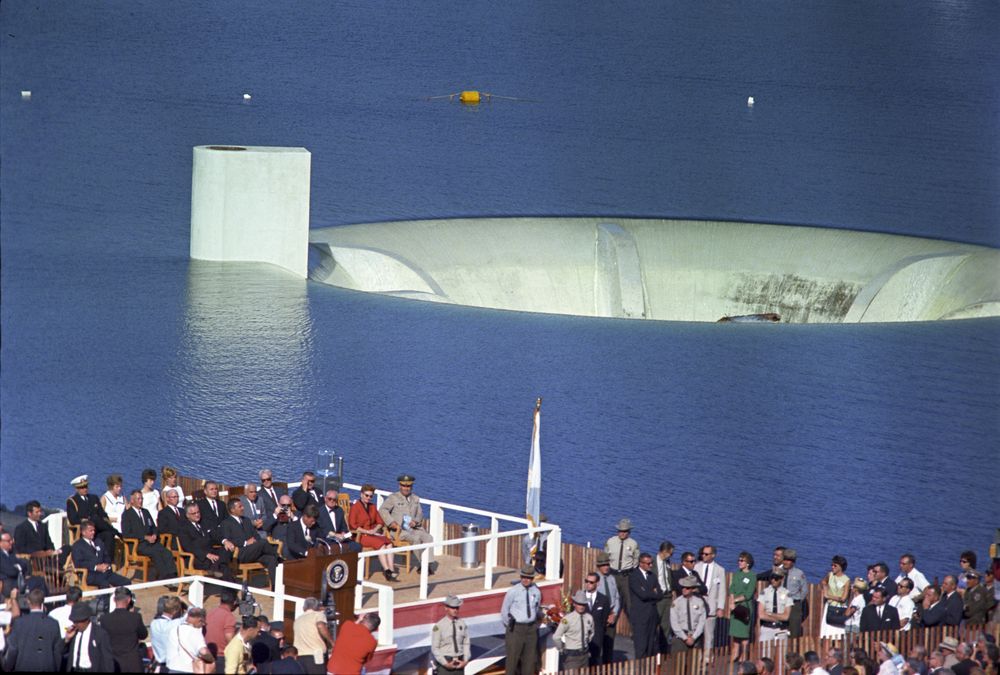 It’s a little-known event in a little-known part of California’s far north. But at dawn this Saturday, people from Redding and nearby places will gather at Whiskeytown Lake and stand where the president of the United States stood 50 years ago.

I wish the rest of California were up there with them.

Like any California water story, the history of Whiskeytown’s dam is opaque and contested, but in broad strokes it begins in the 1920s with an audacious idea: to divert water from the Trinity River, which ran west toward the Pacific, into the Sacramento River, which would carry it to cities and farms to the south. Whiskeytown, a Gold Rush settlement, was eventually chosen as the site for a dam that would hold Trinity water on its way to the Sacramento. The remains of Whiskeytown are 100 feet beneath the lake.

Locals are proud of the dam, a late addition to the Central Valley Project. The Trinity River Division, as the diversion is called, depended heavily on a bipartisan group of engineers and political players in Washington, D.C. and California. Many were local boys who had attended Shasta High together, and they played an important role in changing what had originally been plans to move Trinity water through much of the area by tunnel. Instead, a dam, these men believed, would offer many benefits for people in the region: more irrigable land, more water storage, more power, and a lake that, along with nearby hills and mountains, now constitutes the Whiskeytown National Recreation Area.

“The cast of characters who participated in moving this thing believed strongly in stewardship and citizenship,” says Pat Carr, whose father, Laurence Carr, and uncle, James Carr, then a top official at the U.S. Department of Interior, were two of the locals who made it happen. (Clair Engel, a rare U.S. senator from California’s far north, was another.) “They asked: How do we focus not just on what’s needed in the population centers in terms of water, but on what’s in it for the locals?”

The locals asked Kennedy to honor the project by adding a Whiskeytown stop on his Western “conservation tour” in late September 1963. Kennedy agreed, not least because he had his own motives for coming. In his new book, JFK’s Last Hundred Days, Thurston Clarke writes that “everyone understood that this ‘nonpolitical’ trip was entirely political, his first campaign foray of the 1964 election.” But it produced a memorable day in the north state. High school girls in Hayfork hiked 35 miles through the night and over a mountain to watch the dedication. The last surviving gold miner of Whiskeytown showed up with his mule and whiskey jugs. Sailboats were brought in from Lake Almanor to make the new lake look prettier.

The speech Kennedy gave was no Gettysburg Address, but it was straightforwardly progressive. “This dam stands for the realization of an old and cherished dream,” Kennedy said—a dream that California’s natural resources would not be merely conserved, but used. He praised the growth of the country and predicted that the U.S. population would reach 350 million within 40 years (50 years later, there are 313 million of us). He dismissed opponents who had worried about the costs of building for the future. “As a general rule, every time we bet on the future of the country, we win,” he said.

Kennedy was killed less than two months later, and local remembrances of his visit have been frequent. This year, on the 50th anniversary, there will be not only a sunrise ceremony but also a symposium that includes a panel devoted to California’s controversial water issues today. Someone will probably point out that we know more today than we did 50 years ago about the damage that dams can do to fisheries and habitat; the diversion of all that Trinity River water had lasting side effects.

But, as Jim Milestone, superintendent of Whiskeytown National Recreation Area, told me, what’s worth celebrating is that the people involved “looked into the future, had big ideas, and made them happen for the good of the country and the good of the economy.”

Today, our debates in California about development are usually framed as an either-or: develop or not. Kennedy and the builders of the ’60s may or may not have gotten the balance right, but when it came to conservation versus development, they understood the need for both.

And for action. California is stuck, unable to maintain its aging infrastructure, much less build for the future. At Whiskeytown, Kennedy congratulated Californians on approving a bond to pay for its water projects. We could vote again on a massive water bond next year. But will we say yes? “Things don’t happen, they are made to happen,” was a favorite Kennedy line.

The name Whiskeytown also has magic, as Kennedy himself recognized. The president began his speech by reciting the first lines of Stephen Vincent Benét’s poem “American Names.”

I have fallen in love with American names,
The sharp names that never get fat,
The snakeskin-titles of mining-claims,
The plumed war-bonnet of Medicine Hat,
Tucson and Deadwood and Lost Mule Flat.

The president told the crowd that Benét’s failure to pay tribute to Whiskeytown had been a serious oversight. Today’s Californians shouldn’t repeat the mistake.