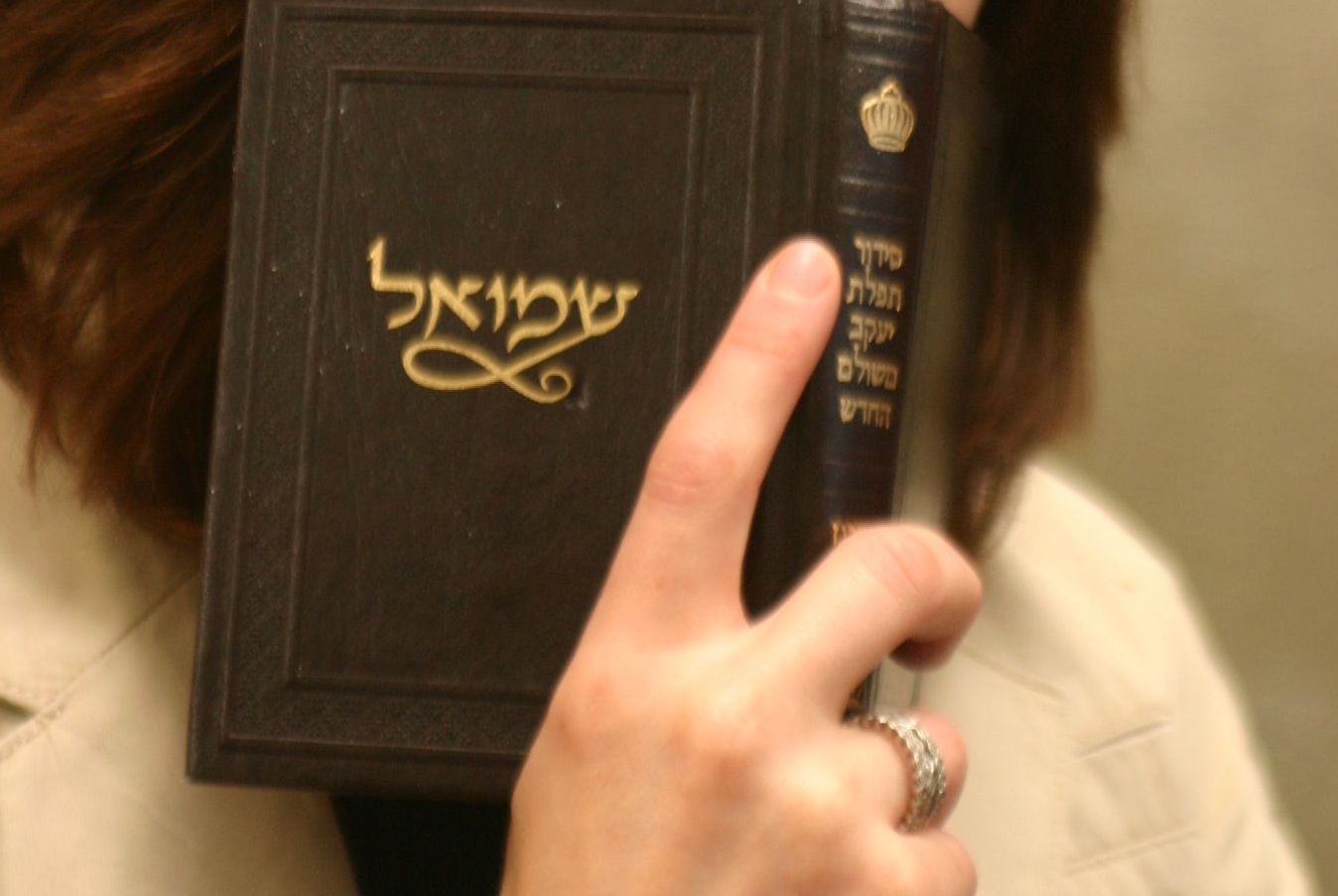 It’s Friday night and I’m sitting by myself near the back of the Wilshire Ebell Theatre in the Hancock Park neighborhood of Los Angeles, listening to Rabbi Mordecai Finley talk about the “inner pharaoh,” an internal oppressor who keeps us trapped with the crushing persistence of the pharaoh of ancient Egypt. The lights are dim in the huge hall, and I can smell lavender and eucalyptus, the lilies up on the glowing stage.

I’d flown in from the East Coast that morning, then headed, a few hours later, to Ohr HaTorah, Rabbi Finley’s Westside synagogue. Which was not, it turned out, where services were being held. I don’t actually live in L.A. I don’t have family here, or many friends. I’m not a member of this shul. I’d traveled 3,000 miles for Yom Kippur, the Jewish Day of Atonement, the holiest day of the year, and wound up arriving 30 minutes late. For the sin of not double-checking the address before getting on the freeway, and for the sin of underestimating how long it would take to blow-dry my hair.

My regular synagogue is on Manhattan’s Lower East Side. The Shul of New York, led by Rabbi Burt, holds services at the Angel Orensanz Foundation, a huge Gothic Revival synagogue built in 1849 and never fully renovated. The pointed arches and crumbling mortar outside, the cavernous vaulted chapel within—always cool, smelling of clay—are so soulful, so redolent of worshippers past, just entering the sanctuary makes you feel holy.

Rabbi Burt is a true spiritual leader with a peripatetic congregation that has followed him throughout New York City for decades. In his early 70s, he still does yoga. He spends a month in India each year. Services are mostly music, led by the sexy Cantor Adam on acoustic guitar, a man young enough to be a new parent. Seth, also a new parent, plays ukulele. The Villalobos brothers—three violinists from Mexico, one more dashing and dark-eyed from the next—aren’t even Jewish. There’s dancing in the aisles, clapping in the seats. You attend the Shul of New York to give in to the good feeling, to go with the flow, catch a good wave on its peak and ride it in. It’s very, how shall I say? L.A.

This year on Rosh Hashanah, the Jewish New Year, I was facing divorce. Many of my old traditions felt limiting, constraining. The High Holy Days prayer book at the Shul of New York looked, well, thin, light on sins. I needed something deeper for Yom Kippur, more challenging, more transformational.

I’d first heard about Ohr HaTorah over the summer, at parents’ day at the camp in Santa Monica where I sent my son. My husband and I had been separated for more than a year by then. After a decade of his refusing to move to L.A., as I wanted, I decided that as a single person, I could take my son and go for a couple months myself. I’d spent too many years in my marriage acquiescing, accommodating a spouse who I felt didn’t bend in return. I was determined to summer in L.A., and I didn’t need permission.

Actually, I did need permission, or at least agreement, which my future-ex was quick to grant. He’s grown weekly more flexible, more aware of my needs, more broadly supportive, since we’ve been apart. He is, in fact, the ideal ex-husband. Not that he could fathom why anyone would want to move across the country, uproot, give up years of social capital. “Who does that?” was his general critique.

I’ve done that all my life. I fled the gray, low-sky suburbs of Detroit after high school to attend college in Texas. I lived in Paris before New York. I’ve long been eager to uproot myself again.

At parents’ day, I started talking to a woman named Nita, the grandmother of another camper. We were sitting on the metal bleachers by the outdoor pool, watching our kids splash around under the bright, white, L.A. light. Nita also hailed from the Detroit suburbs. She’d also written books about relationships. She declared herself my new best friend, took my phone number for play dates, and invited me to Ohr HaTorah.

Like my New York rabbi, Rabbi Finley is a true leader, but of a different sort. In addition to rabbinical training, he earned a Ph.D. in religion and social ethics from USC. He has side jobs as a professor and counselor. He wakes up each morning and reviews his behavior from the day before. Then he reads the op-ed page of The New York Times and the Wall Street Journal, and wrestles with their opposing views.

He prepares for his Saturday morning services—which run for three hours, and are always packed—with the rigor of a college professor. Services begin with an hour-long disquisition on moral issues, such as the need to analyze the facts rather than give in to an effluence of emotion, or the notion that free speech does not give you the moral right to criticize your spouse. The synagogue experience is intellectual. Challenging. Intense. It’s a little, how shall I say? New York.

We have to be careful of our unquestioned beliefs—the intellectualism of New York versus the purported shallowness of L.A., the love in a marriage versus the hatred in divorce. Sometimes, in our personal lives, we may even have mistaken who’s oppressing whom.

On Yom Kippur eve, I finally arrived at the theater in the hilly subdivision with fan palms towering overhead. The rabbi was talking about Yom Kippur as a kind of spiritual emancipation. He told a story of a college girl he’d counseled whose roommate was keeping her up nights with repetitive tales of her parents’ foibles, her boyfriend’s deceits. The girl seeking counsel didn’t want to ask the roommate to stop talking because she thought it would be “mean.” Instead, she was listening all night, then arriving late to class, making mistakes, hating college.

Your inner pharaoh could be the dark side of your own niceness, Rabbi Finley proposed, refusing to set boundaries for fear of hurting someone else. All this niceness is also a way of not questioning a deep-seated assumption that other people’s needs are more important than your own. I’d done this, too, I felt. For the sin of letting one’s spouse make all the decisions, and for the sin of then complaining about it for 10 years straight.

After the service, congregants milled about the lobby hugging old friends, hoisting little girls on their shoulders, placing hands under elbows of aging relatives. The lobby rang with laughter, shouts of greeting, the warmth of good will and closeness.

I stood there looking around at all these people surrounded by loved ones, suddenly self-conscious about being alone in a city where I didn’t live, at a religious organization to which I didn’t belong, surrounded by hundreds of people I didn’t know. I could have been around those I’ve known for years back in New York, or with my own family. Yes, I want to reboot my life, but who flies across the country to spend the most important community event alone because she likes the weather? For the sin of going to great lengths to feel alienated, and for the sin of squandering frequent flier miles to feel unmoored?

On Saturday morning, I returned to services early. The hall was sparsely packed. I saw my new-best-friend Nita. She’d reserved a row for her friends, draping prayer shawls and pocketbooks over the seats. “Sit here, sit here,” she said, patting the seat next to her.

In New York, I always sit alone. I’ve never had a partner or even close friend moved by regular religious observance. Out in L.A., I sat enmeshed in community. If we ever do move here, I’d have to give up my default position of alienation, I thought. I’d have to become comfortable with belonging.

There’s a custom in Judaism of honoring special congregants with an aliyah, a chance to lead the congregation in chanting the blessings before and after the reading of the Torah. Rabbi Finley called up all of us who were celebrating the High Holy Days at Ohr HaTorah for the first time.

“Go up, go up!” Nita said, poking me in the arm. I mounted the stage, my L.A.-style white cotton shawl draped over my shoulders, and sang with a few dozen others before the congregation. I never sing anywhere; even my five-year-old son asks me to stop singing the barely melodic theme song of Fireman Sam.

Singing on stage gave me a spark, a little thrill. This is the other reason one flies across the country for Yom Kippur when there are perfectly good synagogues in New York. It’s why one might talk to strangers on airplanes, move cities, switch careers, leave a moribund marriage. When you start over again, you get to try things you’ve never done before. You face the challenge of crossing six freeway lanes to your exit in a new city, or understanding why, with so many numbers to choose from, city planners named almost every freeway after a combination of 0 and 1.

When you’re new again, you break out of the carapace of your prior existence. You see afresh who you might become. I may be too infatuated with the thrill of serendipity—there is a dark side to the constant churning as well. But there’s something humanistic about relying on the kindness of strangers, who do, in fact, always reach out. It’s a reminder that we live in a web of humanity, that we are not ever really alone.