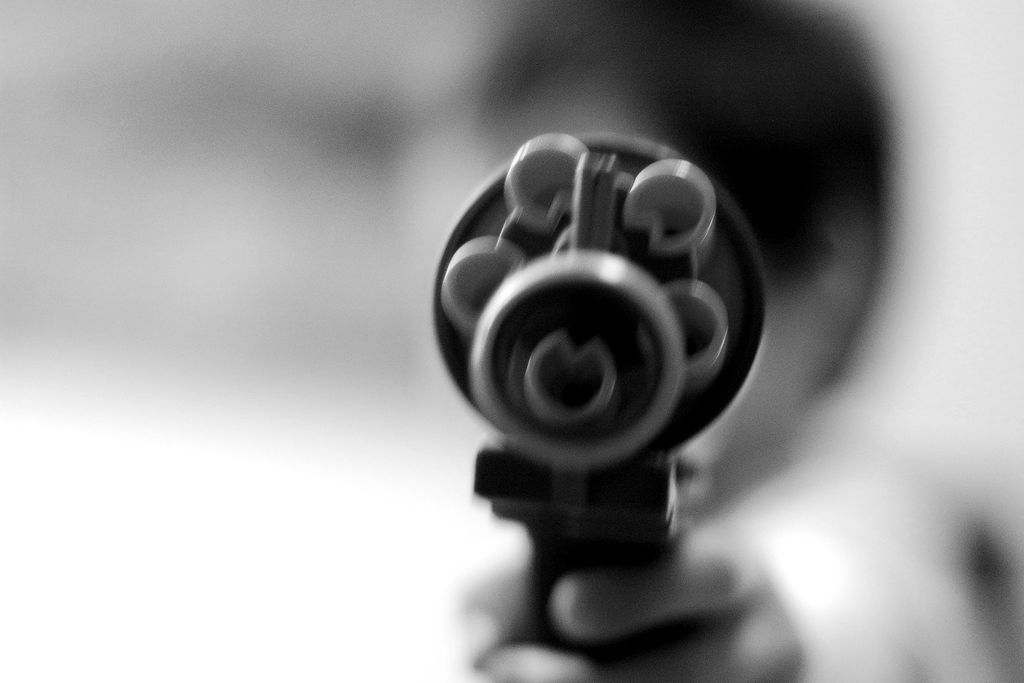 Six years ago, my husband Mark retired from the Los Angeles Police Department. After 37 years as a police officer, he still possessed three guns, which are safely locked away somewhere in our house. Since retirement, he has never removed these guns from their hiding place. I suspect they serve more as mementos, along with his badge encased in Lucite.

Throughout his career in law enforcement, Mark was systematically and repeatedly tested on gun skills and safety. LAPD officers are required to re-qualify on the pistol range every two months. It didn’t matter if you sat behind a desk as an upper-level administrator or if you were a rookie cop in a patrol car, you had to constantly demonstrate your shooting skills. The test consists of firing 40 rounds at two targets from distances ranging from 7 to 25 yards. Each phase is timed, with the shortest consisting of six rounds, alternating between targets, in four seconds.

Additionally, every officer is required to qualify twice a year to shoot a 12-gauge shotgun and an “Urban Police Rifle” (a euphemism for an assault rifle). An officer who fails to qualify must repeat the test at his or her own expense until a qualifying score is achieved. Even in his final position, as deputy chief of counterterrorism, Mark still had to confirm that he understood gun safety and knew how to handle firearms. Every two months, he drove out to the LAPD pistol range to shoot at targets, receiving a score that allowed him to continue to carry a concealed weapon.

I find all this remarkable, especially because, in 37 years, he never shot a single person.

But many law enforcement professionals use firearms on a weekly, if not daily, basis. Even though the crime rate is currently in decline, there are still shootings and deaths associated with guns in Los Angeles. Sometimes the shooters are criminals, often they are gang members; in some cases, the shooters are LAPD officers or county sheriffs. In many of these incidents, gangs and law enforcement share similar experiences—the question of why guns were drawn in the first place often lingers as a subject of neighborhood rumors and law enforcement review boards.

Over the years, many gang members I know have insisted, “The cops, oh yeah, they think they’re different. But they’re just another gang.” There is a certain street-based credibility to these words. As an anthropologist, I have observed how these two subcultures share many common elements—histories, rituals, rules of engagement, and power hierarchies. Both groups regard guns as part of their behavior, their personalities, and their identities. Just as I was aware that my husband never left home without carrying at least one of his firearms, the gang members I got to know often told me, “I never go out the door unless I’m strapped.” Or, another gang member explained, “I need my gun, I never know what’s gonna happen.”

Alongside their shared elements, there are obvious differences between the two groups, one with relevance for the use and abuse of firearms. After documenting the lives of gang members ethnographically for more than a decade, I have learned that they engage in an intimate relationship with guns but, unlike police officers, they know virtually nothing about how to shoot a gun or handle it safely.

When I asked a veteran gang member preparing to serve time for manslaughter how he had learned to shoot, he looked at me blankly, then offered: “I don’t know. Someone put a gun in my hands and told me to point and squeeze the trigger.” I have heard other stories of how a “big homie”—an older, big brother gang member—instructed young initiates how to shoot by using empty cans and bottles as targets. But this was a far cry from a certification trial at a rifle range. The simple truth is that the gang members I know have no idea how to use guns—they had no instruction in the dangers and responsibilities involved in carrying a firearm.

The lethal impact of guns is strongly linked to their ready availability, but that’s not all. Their destructive effect is all too often linked to individuals who don’t have any experience with shooting or gun safety. This is the reason why we see so much collateral damage, but it is a truth that is rarely noted. And it’s not just a problem for gang members.

In 1999, I spent time in Kosovo, helping advance models of non-violent conflict resolution in a post-war environment—or, in plain English—getting people to try to settle centuries-old arguments without resorting to weapons. One “peacekeeper” suggested I carry an extra Beretta pistol he just happened to have “hanging around.” When I confessed I had absolutely no experience with guns and asked if he could give me some instruction, he smirked and told me, “You don’t need me—you’ll know what to do and when to do it.”

His words came back to me years later when I tried to buy a gun online. I was able to complete the purchase in about five minutes without ever demonstrating that I had any idea how to load the gun, point it, or shoot it safely so that the bullet would reach its intended target—an aluminum can instead of a 3-year-old child. “Guns bother me,” one homie told me. “Not because of how we use them on each other, but how the bullets might find babies.”

The National Rifle Association says that it supports “safe firearm handling in everything we do. Whether competitive shooting or hunter education or simple gun collecting, safety is a first step in everything we do.” But their ongoing campaign—which declares that Americans need guns to protect themselves—fails to deal specifically with just how to ensure this gun safety. What is their public message about guns in the hands of people who simply do not know the most basic things about how to use them? Are they saying what the homies say: Gun safety is good, now go figure out how to practice it?

As long as guns are readily available—whether legally or illegally—and there is no determination of people’s mental and physical competency and knowledge about how to use them, we’ll see more victims of collateral damage.

Many law enforcement officers are huge proponents of gun control. Cops tend to believe, as one gang detective told me, “Cops don’t want people who have no idea how to shoot owning guns.” Perhaps this intuitive understanding can be discussed, enlarged, and used to inform the often irrational but always meaningful, ongoing debate regarding guns and their control. Certainly the universal need for instruction and knowledge of gun safety can be used to thoughtfully and strategically guide gun control policy and practice.