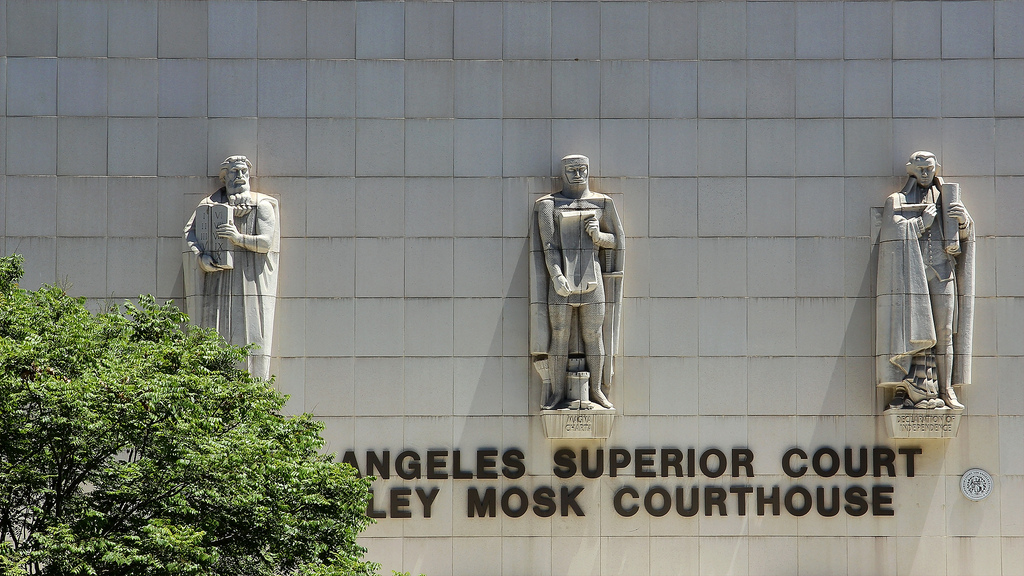 “Right over here,” says the garage attendant directing me with a welcoming smile and a red glow stick to a parking stall just around the corner from the premium spot reserved for the L.A. Philharmonic’s wunderkind music director Gustavo Dudamel, who, apparently, drives a late-model Porsche. Not only am I parking on level one of the Disney Concert Hall’s underground garage; I’m parking for free, thanks to the Los Angeles County Superior Court. I’m here to fulfill a civic obligation that is dreaded by most: jury duty.

Thanks to the court’s optional online juror orientation, which I did over the weekend, I’m skating into the late moderne Stanley Mosk Courthouse at 9:30 a.m., an hour past most of my fellow jurors. Entering the jury assembly room, I’m greeted by amenities we can’t even count on at LAX: working Wi-Fi, spacious tables, comfortable chairs, and a free Internet kiosk.

At 9:35 a.m.—far more promptly than I expect for the L.A. County judicial bureaucracy—the jury administrator calls my name along with 23 others. “Department 96, fifth floor—after you get off the escalator, turn right, and make another right, and the courtroom is at the end of the hall,” she says. Courthouses, I learn, have not only got the long hallway thing down pat—they have floors that actually sound like courthouses: the symphony of shoe heels on marble manages to evoke a place of genuine importance, even if the adjoining walls could use a brighter coat of paint. The judge is a silver-haired gentleman with leathery skin who wouldn’t appear out of place on horseback in a John Ford Western—and neither would his grand-storyteller voice.

It’s time for voir dire, the questioning (and, I assume for me at least, subsequent dismissal) of potential jurors. It takes up the rest of the morning and goes into the early afternoon, when siestas seem more pressing than justice. One presumably learned juror candidate, a scarf-wearing, fervent reader of The New York Review of Books during breaks, weasels her way out of service by refusing to budge on the question on whether she could be fair to a corporation if a corporation were a party in this case. “No, your honor, a corporation is not a person, and therefore I can’t treat it like a person,” she responds.

“There are parts of the law I don’t agree with, but that I am obligated to follow,” says the judge. “Are you telling me you can’t do that?”

When it’s my turn, I mention that I’ve sued an insurance company in small claims court (and won) but that I could still hear the evidence and be impartial. My truthful answer passes muster, and the next thing I know I’m on for a trial that is expected to last a week, during which our phones are to be turned off. I gulp and make a mental note to let my public affairs clients—some of whom frequently do business in this very courthouse—know about my new schedule-via-civic-obligation for the week. It’s a civil case involving alleged workplace harassment and abuse, and the judge reminds us of the significance of jurors in our judicial system.

Then, for the first time since sixth grade, I’m ordered to take recess—90 minutes for lunch. Which is when I make what might be the greatest discovery of my time on jury duty: the Panorama Café, the courthouse’s ninth-floor cafeteria. The food’s quite good and reasonably priced, and the café has a wrap-around patio with a 360-degree view that includes Dodger Stadium, City Hall, the Cathedral, the Music Center, and a perfect sightline of Bunker Hill’s skyscrapers. There’s no signage elsewhere in the building for the restaurant, and I wonder if the judges, lawyers, and courthouse employees are just trying to keep this wonderful public perch to themselves. But the secret’s out, at least on Yelp.com. I definitely agree with Joann L. of San Francisco’s recent entry: The Panorama Café is “super legit amazing, not the ghetto but legit amazing.”

Serving on a jury is generally thought of as being mind-numbing, but, over the next five days of testimony, the case is even more “legit amazing” than I could have imagined. The plaintiff is alleging that three of his former colleagues hazed him to the point where he couldn’t bear coming to work—even when one of his former colleagues turns out to be a family friend. The descriptions of alleged workplace abuse are vivid and disturbing, involving pile-ons, broomstick handles, and verbal taunts. But the accounts of what happened and why differ markedly, depending on who’s telling the story. Although our burden of proof is only a “preponderance” of the evidence—and our threshold for a decision is a three-quarters majority rather than a unanimous jury—this case gets more complicated by the sentence.

We hear from the plaintiff and three defendants, a corporate investigator, foremen, supervisors, division managers, a psychologist, and a forensic psychiatrist. The forensic psychiatrist testifies for the defendants’ team, calling into question the plaintiff’s alleged psychological injuries and how some mental health questionnaires aren’t as reliable as others. He comes off a bit pompous and elite, and I doubt he’ll go over well with our diverse jury. He also reveals that he’s paid $600 an hour when he’s called as an expert witness, and I briefly consider a career change.

During our afternoon recess, I head down to fourth floor to get better phone reception and spot one of those sad display cases that are often ignored in civic buildings. This one has a couple of bundles of yellowed, rolled-up paper inside that turn out to be the original will and estate of local 19th-century land baron Isaac Van Nuys, who founded the community—now a San Fernando Valley neighborhood—that bears his last name. There are thousands more records like this in the bowels of the courthouse; the place must be a field day for historians and biographers. I pass by the family law division, where about 30 mothers (and very few fathers) sit on benches, most with young children. A sign promotes the free childcare service at the courtroom—which, I imagine, is essential for those seeking the likes of custody or child support without having to search for dropped pacifiers or misplaced sippy cups while speaking to a judge.

The following Monday—a full week after I was first called in for jury duty—my fellow jurors and I finally retreat to the jury room. The judge lifts his admonishments not to discuss the case amongst ourselves, we select a foreman, and we deliberate. We take our job seriously, going through detailed aspects of the case point by point, resolving our differences, and bridging once-wide gulfs of opinion. My hunch about the forensic psychiatrist is way off, as nearly all of my fellow jurors found him to be one of the most reliable witnesses called to the stand. By the beginning of our third day of deliberations, one of the jurors asks if any of us went to bed thinking about the case, and even woke up thinking about it, too. Yes, we all admit to each other, yes.

We render a mixed verdict, assessing monetary damages against one of the defendants but not the others. The case is complicated, nuanced, and difficult, and my fellow jurors and I are physically and emotionally spent. We know our decision, both legally and monetarily, will have a lasting impact on the plaintiff, the defendants, and even their attorneys, for years to come.

It’s the hardest I’ve ever worked for a mere $105 (jurors are paid a tiny bit for their service), and I’m so exhausted I feel as if I were on trial. And the thing is that I could have been. The physical appearance of the Stanley Mosk Courthouse, and the way most of us think about jury service, don’t do justice to what goes on within these walls. There aren’t usually criminal cases here, mostly small claims, civil, probate, and family law cases. Sure, we see this very courthouse on TV—the week I’m there coincides with AEG Live on trial for the wrongful death of Michael Jackson, and I can see the satellite trucks and reporters from the windows. But it’s these much less newsworthy cases that often have the biggest impact on the everyday lives of Angelenos from around the county: landlords vs. tenants, car repair facilities vs. customers, ex-wives vs. ex-husbands.

I hope I don’t return to the courthouse as any of those parties. But whether or not I’m called to do my civic duty there again any time soon—and it won’t be for at least 12 months—I know I’ll be coming back, if only for the Panorama Café tostada lunch special and to check up on Isaac Van Nuys.