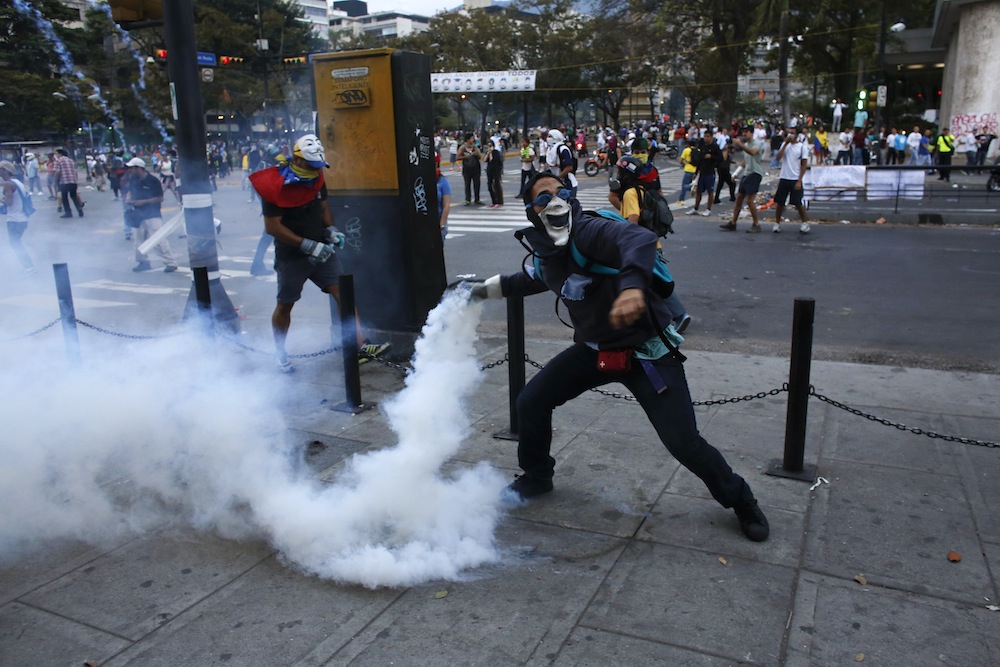 What’s the best way to protect a 7-month-old girl from the effects of tear gas? Is it dangerous for her to breathe the smoke from a pile of burning garbage in front of this building? Can a 9-millimeter bullet pass through the walls of our apartment? Will I find food for my family next week in our densely populated middle-class neighborhood, or should we stock an emergency reserve of groceries?

These are some of the questions that my wife and I have been asking ourselves since February 12, when members of Venezuela’s political opposition marched on downtown Caracas and were attacked by supporters of the recently deceased president, Hugo Chávez. Two students were shot in the head and killed, and the subsequent rage pushed the opposition to continue the most recent series of protests against the regime that inherited Chávez’s idea of power.

We live in an apartment half a block away from Plaza Altamira in Caracas, one of the main sites of the upheaval; several times, the tide of the struggle has penetrated the borders of our private life.

The origins of all this mayhem date back to Venezuela’s surreal chavista experiment, but the immediate trigger was a protest following an attempted rape at a college campus in San Cristóbal, the capital of the state of Táchira, on the Colombian border. The National Guard responded with extreme force, the demonstrators multiplied, and two opposition politicians—the youthful and charismatic former Caracas mayor Leopoldo López and congresswoman María Corina Machado—claimed that the only way to save the country was to occupy the streets and to build up the pressure against Chávez’s chosen heir, President Nicolás Maduro, who took office after winning by less than 2 percent of the vote in contested elections last year. In Maduro’s first year, Venezuela has continued to experience the levels of urban violence, inflation, and scarcity of basic goods usually associated with wartime.

López has since been detained by the authorities, and he is not alone. Foro Penal, a group of human rights lawyers, estimates that 15 people have died in the protests, and more than 700 protesters have been arrested. Reported cases of torture and abuse keep mounting, attributed to the three forces leading the crackdown: the Bolivarian National Police (named after Chávez’s inspiration, Simon Bolívar, Venezuela’s George Washington), the Bolivarian National Guard, and the fearsome colectivos, hard-line leftist groups reminiscent of the Cuban-financed urban guerrillas of the 1960s—except these guys have fast motorcycles, assault rifles, and total support from the government.

Demonstrators, for their part, have started blocking streets in their own middle-class neighborhoods in a blind expression of fear, rage, and desperation that exacerbates the country’s economic paralysis and the shortages that worsen the haves-versus-have-nots dichotomy chavismo is built on.

Throughout these dark days, my wife and I had been trying to keep our baby girl safe. Every day there have been protests in Plaza Altamira. A few nights have been very violent, and two even nightmarish. Those evenings, we had to take refuge in my home office, which has no windows that look into the street. There, between jazz records, old magazines, and a messy desk, my wife and our daughter slept in the guest bed while the National Guard hunted down the students they had just expelled from the square with tear gas and plastic shotgun pellets.

The National Guard wanted to take the students back to their headquarters, where, according to many student accounts, some would be tortured and handed back to their parents for a ransom that could climb to as much as $10,000 per prisoner. In U.S. dollars, of course—not even the regime’s thugs have faith in their own currency.

So we shut all the windows and waited there, gunfire and sirens blaring around us like a flock of Furies. Our neighbors shouted insults to the policemen or guards pursuing the protestors: “Son of a bitch!” “Cowards!” “Murderers!” To this day, no bullet has hit our apartment, and we’ve managed to keep the tear gas out of home. On Sunday nights, we’ve even enjoyed our dose of True Detective. But we’ve lived on various degrees of alert, and I’ve had to crawl out to the balcony at midnight, like a terrified cockroach, to be sure the gunfire has ended without risking my head.

Aside from looking out the windows, the only way to get some information is Twitter. Chavismo won the battle against its favorite bête noire, the press. My wife and I both trained as journalists, but there is no freedom to do in our country what we know how to do.

Newspapers are now reduced to a single section, whittled down to that ghostly existence by government currency controls that make it practically impossible to obtain newsprint. Bloggers and news aggregator websites are not very trustworthy. Three private TV stations have decided not to report about the protests for fear of summoning the regime’s ire. The public depends on social media to know what’s happening, fearing the day when those channels will also be shut down. On the government’s side, there are dozens of state-financed radio stations, seven TV stations, three newspapers, and an official news agency, all of them supportive of President Maduro. They broadcast the glory of Chávez’s Bolivarian Revolution 24/7 and rail against enemies of the government—“fascists,” “homosexuals,” “terrorists,” “CIA agents,” “traitors,” “prostitutes,” “drug addicts,” “psychopaths.”

This is the ideal environment for collective hysteria, just as a civil war would be. But it’s not a civil war, although that’s been mentioned—with anguish, but also a certain eagerness—by people on both sides. Nor is it a coup d’état in progress, as Maduro repeats while he dances salsa in a rally with his wife that invoked the escapist spirit of Carnival.

The president has tried calming the upheaval: extending the Carnival holiday by a week, when his administration will preside over the commemorative anniversary of the first year without the “Supreme and Eternal Commander,” Hugo Chávez. Maduro trusts in the idiosyncratic tendency of Venezuelans to go to the beach and drown their worries in cold beer.

But the opposition is still marching in several places—in some cases under a cloud of tear gas. The colectivos are still shooting and looting, and the situation in the restive state Táchira remains unsettled. For the moment, Chávez’s heirs have no reason to change course: Maduro’s government retains some popularity and controls Congress, the military, the Supreme Court, law enforcement, and the oil revenues. But it can’t control the collapsing economy, and even if the current demonstrations lose momentum, it’s clear several more will follow. Venezuela has entered a state of violence and instability for the foreseeable future.

And we, from our panic room, are sure that this is no place to raise a child.