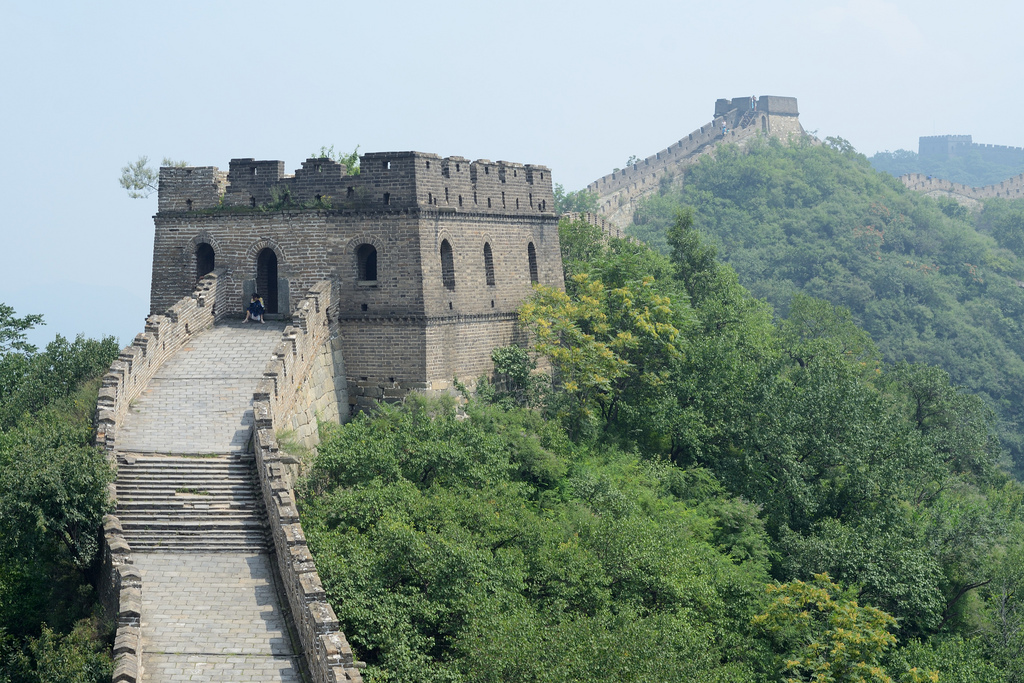 If my life so far could be said to have one truly transformative moment, I think it was the intense meeting in early spring 2006 in the village hall after the mayor of Mutianyu village, Comrade Li Lianting, announced over the public address speakers that Jim Spear was to report immediately. The announcement echoed all around the steep valley walls where our homes cling to narrow dirt lanes off the winding blacktop road and dry streambed. Never before had I been summoned by any authority. With a tight knot in my belly, I hurried off down the lane lined with blossoming pear trees, and I wondered to myself, How in the world did I end up in a mountain village under the Great Wall of China?

The answer to that question begins in California, where my parents’ families had arrived from Oklahoma (the Dust Bowl brought my mom’s side) and Illinois (my grandmother’s tuberculosis and my grandfather’s Depression business failures brought my dad’s side). My father and mother met in Ridgecrest, in San Bernardino County near Death Valley, while my dad was working as a manual laborer in the Trona potash plant. When my dad patriotically enlisted in the military during the Korean War and was posted to Massachusetts, my mom took the train cross country to join him and get married. After his discharge my parents had nowhere to go except back to Trona, where I was born in 1955. My brilliant, angry, lonely father retreated from us to a closet in the little company house each night after his hard shift in the plant to fiddle around on the ham radio equipment he built himself.

I know that I was wanted, loved, and probably destined to become a good ole boy, like my many uncles and boy cousins, all of us scions of Okies and hillbillies, trapped inland picking prunes and listening to Merle Haggard, smart for sure, but simply circumscribed. My parents changed the trajectory of our lives by running away again in 1960 to University of California, San Diego and then Berkeley for a GI Bill education for my father, unremitting hard work and self-improvement for both of them, and upward mobility in the expansive, optimistic United States of my youth.

Whatever we accomplished it was never enough for my perpetually dissatisfied father. Eventually, to hurt him, I ran away myself at age 20, dropping out of college to join the Army where I studied Chinese. I went back to school at Berkeley and married my Mainland Chinese language tutor, Liang Tang. Finally, on January 17, 1986, leaving a doctorate program in political science, I went to live on the other side of the world near Liang’s family in Beijing, where we raised our daughters Lauren and Emily.

Spring that year was the first time we visited a section of the Great Wall called Mutianyu. Spellbound, I kept returning to that section, reconstructed in the mid-Ming dynasty, where the descendants of the construction laborers and the garrison troops still huddled in brick and fieldstone houses. The village wall and temple had been torn down in the Cultural Revolution. The foragers had since become orchardists for the market after cutting down all but a few stands of the crown pines, and most of the orchardists had by then already become hawkers at the newly-opened Great Wall tourist site.

All this I learned only much later, long after even my fateful encounter with a man named Li Fengquan nearly 20 years ago. This landlord’s grandson was the only high school graduate in the village in his generation, forbidden to attend college, consigned for life to his home turf, numerate manager of the village accounts in the evenings, modest and honest, worn from decades of toil. I found him in a stall where he tried to sell me trinkets. When I demurred and told this Li Fengquan that I envied his life in such a beautiful place, he surprised both of us by suddenly offering to help my family acquire a village house on his own lane. That chance collision was serendipity, at which we both still marvel.

In our walled and gated Mutianyu home, I found a treasured refuge from city hustle and my ceaseless business travel selling medical products to hospitals across the country. In the village, I was surrounded by strangers, a cyst in their community. I was friendless there except for Li Fengquan and a few of his pals who liked to stop in for a taste of my exotic liquors and, as men do, fritter the evening away with ever more exotic tales. Over the years, after I finally escaped from my wanderings to come to rest full-time in Mutianyu in 2005, these men have shared the weddings, christenings, and funerals in their families with my family.

So it was that almost a decade ago, I came to find myself hauled into Mayor Li Lianting’s smoky office where he sat behind his massive, teacup-strewn desk to lecture this outsider-cum-villager that, in case I hadn’t noticed, this 500-year-old village was falling apart. Young people were moving away, no businesses were there to provide challenging jobs, old folks were left without family. And since they had allowed me to live in their midst, and since I was a rich American, the mayor asked me, didn’t I think it was about time to start giving something back?

It turned out, I realized with a flash, that my journey had returned me to my California of prune pickers (though here it was mostly chestnuts to be picked) and Merle Haggard, and that made my eyes tear up.

Taking up the mayor’s challenge, Liang and I, along with our friends Julie Upton-Wang and her husband Peiming Wang, embarked on an adventure that has turned Mutianyu’s abandoned village schoolhouse into the centerpiece of what is today a tourism enterprise with restaurants, a boutique hotel, rental homes, an art glass studio, and an orchard. Our little coffee shop has become the largest private employer of local people, networked with individuals and other businesses in the area, retaining existing buildings and redeploying them to new uses, growing a good deal of our own food, for-profit but committed to social and ecological sustainability.

As we cultivate our businesses here in this township of Bohai—the collection of 20-odd villages including mine—I am beginning to feel in my gut the way that economic development and urbanization are sucking rural communities all over China dry. Good country folk and their generations stay home in dying towns to wither, often losing their land. Or they can head to Beijing—that imperial capital, just within sight from the Great Wall, plump and smog-ridden on the edge of the North China Plain, like Los Angeles in the 1960s—and end up slaving away at city jobs that don’t pay a really living wage. This is happening, I fear, all over the world—from Outback Australia to Oklahoma, and even to the California that’s always on my mind.