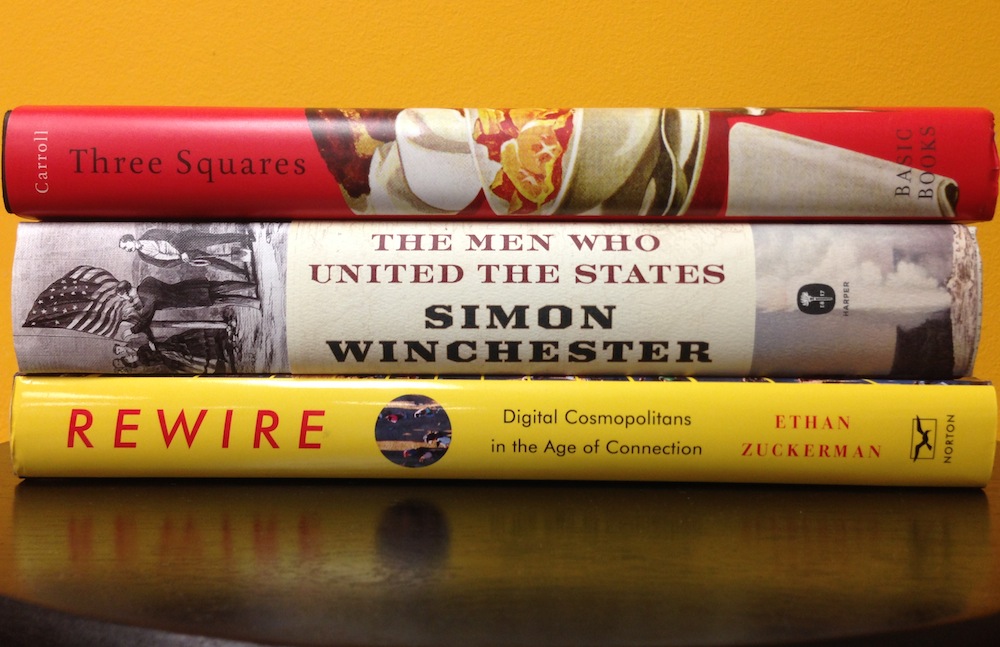 The Fourth Annual Zócalo Public Square Book Prize is made possible by the generous support of the California Community Foundation.

Events like the Olympics and World Cup can reliably be counted on to bring countries and people together for a few weeks around love of sport, hatred of opponents, and deep suspicion of judges and referees. Zócalo’s mission is to create a space that brings people together not just every four years but daily, online and on-the-ground—and to explore places, ideas, and experiences that connect us to one another.

With this in mind, we are proud to honor the author of the book published last year that most enhances our understanding of community and connectedness with the Fourth Annual Zócalo Public Square Book Prize.

Because we take a broad view of social cohesion, we considered U.S.-published books exploring civility, poverty, love in the time of technology, and friendship since the ancient Greeks. We examined 100 entries from sociologists, biologists, lawyers, psychologists, an architect, and a gardener.

The three finalists chosen by our seven-judge panel are terrific storytellers and thinkers who view community and connection through entirely different lenses.

On Thursday, April 3 we’ll announce the winning author, who will receive $5,000 and deliver a lecture at our book prize ceremony:

Below, in alphabetical order by author, are introductions to our top three contenders:

Three Squares: The Invention of the American Meal by Abigail Carroll

More than ever before in America, food is not just mere nourishment. We’ve been coming together around meals since the Industrial Revolution but why, asks cultural historian Carroll, do we gather for the family dinner, and why is it important? How does the way the nation eats define who we are today—and what has our food said about us since the colonial era? The meals we eat, writes Carroll, speak “to the deep, often tacit relationships we have with our families, our sustenance, our society, and ourselves.”

Carroll “argues persuasively that the adage ‘you are what you eat’ needs to be bolstered by the understanding that ‘we are how we eat’” and “looks ahead to our eating habits’ role in shaping our cultural bonds,” said one of our judges. Another applauded her “readable tour of sliced bread and Thanksgiving gluttony” for “helping to explain how we became the way we are.”

The Men Who United the States: America’s Explorers, Inventors, Eccentrics, and Mavericks, and the Creation of One Nation, Indivisible by Simon Winchester

British-born historian Winchester follows in the footsteps of the great men who transformed the disparate geographies and people of the U.S. into a country in order to figure out how American unity was created and sustained. From the explorers Lewis and Clark to the engineers who created the backbone of the Internet, American pioneers created the various ties that bind us together. These ties, write Winchester, “have proved crucial both in maintaining the union and in preventing, or at least lessening the likelihood, of its fracturing and spinning into a thousand separate parts.”

“Winchester manages,” said one of our judges, “to make the creation of infrastructure noble and even exciting, with vivid vignettes of different famous (and oddball) characters from throughout American history who in one way or another helped create the fibers that connect us.” Added another judge, “The tales he weaves were more engaging than most contemporary fiction.”

Rewire: Digital Cosmopolitans in the Age of Connection by Ethan Zuckerman

We shouldn’t assume that the Internet will make the world a smaller place, writes media scholar and Internet activist Zuckerman. The Internet, as we use it today, he argues, is more likely to reinforce our biases than to challenge them, and to connect us more closely to people like us than to strangers. Zuckerman shares case studies and anecdotes of people who have succeeded in bridging cultures and continents as he calls for us to “take control of our technologies and use them to build the world we want rather than the world we fear.”

Rewire, said one of our judges, is “a book for our times” and a “smart, historically nuanced account of the impact of social media” on our world. Said another judge, “It’s rare to read the thoughts of someone who is as exuberant about face-to-face conversation as he is about the algorithms that allow us to interact instantly across continents.”