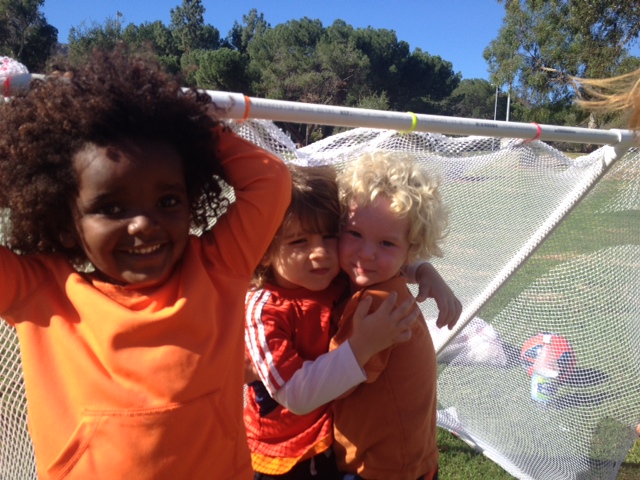 As a young boy, I spent every free moment playing soccer. Except for the obligatory going to school and eating meals, my free time was spent juggling a ball between my feet. My friends and I would play in snow, we would play in rain, and if a practice or game was canceled because there were too many puddles on the field, I would be devastated. And in the Netherlands, where I grew up, it rained a lot.

The Dutch are known for a few things: Van Gogh, Rembrandt and other 17th century masters, windmills, canals, tolerance, klompen (those big wooden clogs), and voetbal, what you Americans call soccer. No matter where I go in the world, people know and love our national team, the Dutch orange lions. In Latin America they’re known as “la maquina naranja” the “Orange machine,” because of their systematic and offensive soccer style.

The Dutch perfected this brand of play in the early 1970s under the genius leadership of Johan Cruyff—who happens to have played in L.A. for one season for the Aztecs of the North American Soccer League. Dutch-style soccer—Total Football (“Totaal voetbal”)—is an apt metaphor for a country that has always punched above its weight on the global stage (there are only 16 million of us) and now ranks highest among the Dutch gifts to the civilized world.

In Fever Pitch, Nick Hornby’s sweet memoir of growing up an Arsenal fan, he wrote about how shocking it was when his “dour” London team adopted the Dutch invention in the early 1970s, a system that necessitated flexibility from all players: “It was football’s version of post-modernism, and the intellectuals loved it.” Since 1905, the Dutch national team has competed at the highest levels of international soccer, reaching three World Cup finals in 1974, 1978, and 2010 and winning the Euro Cup in 1988. As a result of this success, 90 percent of Dutch national players play at Europe’s most important and highest paying club teams. This is an important reason why the purest, most exalted manifestation of Total Football today can be seen not in Holland but in Barcelona, whose fabled team traces its stylistic roots back to Cruyff and a number of other Dutch imports.

Total Football requires the continuous involvement and adaptability of all the players throughout the game. The movement of everyone else around the player who has the ball is essential. If, for example, a player receives a pass, there is always a minimum of two players available for a follow-up pass or a combination.

To succeed at Total Football, a player should always be thinking one step ahead of the action, making optimal use of the space on the field, and moving often outside of his or her own position to provide support and surprise the opponent. Total Football demands that all players understand the dynamics of each position on the field. Played successfully, it makes the game appear fluid and easy to the outside eye.

Asking a preschooler to learn this system sounds like teaching a fish how to ride a bicycle. And although Dutch people love bicycles, I didn’t establish the Dutch Soccer School L.A. because I thought teaching 3- to 6-year-olds how to play soccer the Dutch way was an impossible task.

Last summer, when I saw how much fun my 3-year-old son was having with the soccer ball—and how strongly he was developing his skills—I was inspired to give him and other children his age an outlet to play together and learn the game. I asked my friend Marc—who is not Dutch, and is single, childless, and great with kids—to join me in creating some sort of soccer program for preschoolers. My wife came up with the idea for making it a soccer school, and she promoted it on a Facebook page for local mothers in Atwater Village. Because of my Dutch background and my upbringing in the Dutch soccer style, I knew there was no other option than to call it the Dutch Soccer School L.A. Some parents weren’t convinced: I heard things like, “The children are too young,” and “They can’t focus for that long.” But within a matter of days we had 15 interested parents signing up their children. We built goals from scratch, bought balls and some jerseys, and scouted for a location.

A few weeks ago, we started our third season with a little over 20 kids ages 2 ½ to 6. Every Sunday, we come together in Griffith Park wearing bright orange Dutch jerseys with the kids’ names on the back and the Dutch lion logo on the front. The younger kids usually require their parents to work with them, and sometimes children are scared or shy at first. But they grow more confident as the season goes on. At the first practice, one kid couldn’t even look at me—he held his hands in front of his eyes the whole time. His parents, however, persisted, and after five weeks he was having fun with everyone on the field.

Like any program for young kids, our goal first and foremost is to teach the fun of playing soccer. The first things the kids learn are how to navigate the field, keep the ball on their feet, and slalom around other players. Then they have to learn to do all this—which is hard enough in and of itself—while knowing where they are on the field and without running into their opponents … or their teammates. Many children at this level are blindly running after the ball and not paying any attention to the world around them. Their goal is to get the ball from anyone—even if the person dribbling is their own teammate. So we play substitute games, such as tag, so the kids can learn how to chase someone, to recognize patterns, and to anticipate changing circumstances.

I’m also trying to teach these kids about working together to achieve a goal. I want them to learn to create room on the field so someone else can pass the ball or score. It’s a lesson I think can help them not just on the field but in their lives, too.

Imagine a freeway filled with driving soccer players who think about the other drivers—drivers who move over to make traffic as a whole go faster. That’d be “total commuting.”

Teaching soccer to the youngest members of our community seems small and perhaps non-essential. But for a lot of the kids I coach, the soccer field is the first place where they understand that they are part of something larger then themselves. They learn to navigate through a maze of people, learn to identify themselves as part of a team, and learn what their role on that team is.