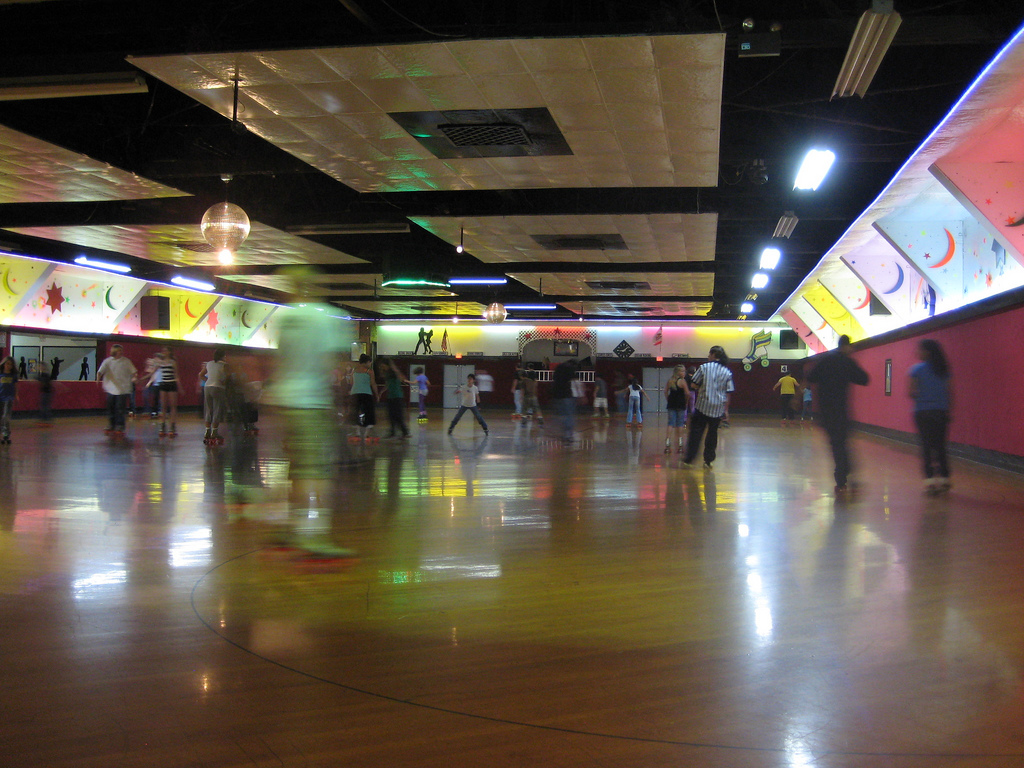 Every Thursday night, my friend Amy and I arrive at Moonlight Rollerway on a lonely industrial strip in Glendale in the blouses and pants we wore to work and throw on leggings and baggy shirts in the bathroom. We’ve got a few pairs of matching, patterned leggings—our favorite space-themed set (think swirling nebulas and stars), one with neon tiger stripes, and a new, racier pair with netted stripes up the sides. I shove on worn beige skates with purple laces while Amy puts on white skates with orange laces. And then we shuffle across a black carpet with little rainbow patterns and glide onto the polished wood floors. Under a disco ball and glittery banners, we dance.

While Thursday at Moonlight is technically “kids’ night” (no age limit), we think of it as R&B night because the DJ plays rhythmic beats that inspire the bouncing and rolling hip-hop-like steps of our dance routines: “Bounce, Rock, Skate, Roll,” by Vaughan Mason and Crew, “Lay With You,” by El DeBarge. We used to skate Mondays at Moonlight, an adults-only night, but the music—mostly Top 40 and rock—wasn’t as good. Some of the songs work—such as “Blurred Lines” by Robin Thicke—but it’s really hard to groove to Bon Jovi.

We also come because Thursday nights aren’t that crowded, so we have plenty of space to practice routines and tricks. Lately, we’ve been learning to do “crazy legs” all the way up on our toes. We like to watch advanced jam skaters like Marcus, a rink guard in a black-and-white referee shirt whose rubbery legs swerve around like Gumby’s. Marcus impresses the crowd during the designated “advanced backward skate time” by rolling around while doing splits. One night of skating costs $9.

Amy and I usually spend about two or more hours at the rink, mostly skating, with one snack break to chat. We get water and popcorn and plop down on a carpeted bench for about 15 minutes to talk about everything from life goals to glitter nail polish. Even though Amy and I are both in our 40s, it’s nice to feel as if we are 14 again. 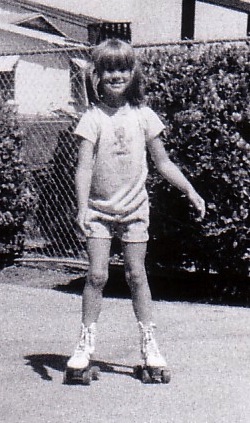 Skating makes me feel calm and elated at the same time. It’s like flying. I’m free. I first put on skates when I was 4 years old. Growing up in Mountain View, California, my sister and I skated everywhere—to buy Now & Laters at the 7-Eleven, to friends’ houses, and to the cement skate rink at our elementary school, where we’d practice doing the “orange,” a basic spin. Trips to the big, indoor rink in Milpitas were a special treat.

When my now-husband and I moved to Los Angeles from New York 11 years ago, I started to show up at Moonlight by myself, drawn to the nostalgia of the rink and craving a good heart-pumping roll. One day, Bret McKenzie and Jemaine Clement, the guys from the HBO comedy show Flight of the Conchords, were there teetering around on rentals. My friend Jen had come with me that night, and we were both freaking out. Bret approached us, asking if we would like to skate in his band’s music video adorned in disco clothes. We played it cool, pretending we had barely heard of the show, but literally jumped up and down when they left. About a week later, we spent a day with Bret, Jemaine, and a small group of skaters, filming their “Ladies of the World” music video in Venice Beach. You can see me leaning against a tree on the beach in an orange one-piece bathing suit in the beginning. (My only quibble is that skaters would never ever really stand in the sand!)

Because of Moonlight, I also ended up as a background skater on the set of Cold Case, shooting an episode about a 1970s murder case involving a roller rink. That’s where I met my mentor, Nelson. Nelson wears a gold roller skate necklace and chain and an impressive, sculpted roller skate belt buckle. There’s no other skater like Nelson, who smiles like a Buddha during his minute-long spins. Nelson learned to skate in the early 1980s, right after he moved to the U.S. from El Salvador, and, to this day, he still skates up to six nights a week in the Los Angeles area. He taught me all of the basic dance skate moves at Moonlight years ago—and a routine called the “downtown,” a series of bouncing, rolling, and spinning moves. Nelson also talked me into checking out the temple of skate dance that was World on Wheels.

World on Wheels, in midtown Los Angeles, was a pulsating, whirring dance party on skates. You paid your $10, pushed through a heavy buzzer door, and joined people of all ages, from 15 to 75. We skated together for exercise, to socialize, and melt stress away, to R&B, funk, soul, and hip-hop, holding hands and bopping around the rink. Many of the skaters had been going there for decades, since opening night in 1981. People wore jeans and fitted tops, and some of the skaters had loafer shoes fashioned into skates with tiny wheels. Sweat rags hung out of back pockets. I learned the “grapevine” at World on Wheels, a zigzagging move where you glide sideways as you cross your feet, moving from toes to heels.

Last year, World on Wheels closed. Roller rinks are on their way to becoming an endangered species in Los Angeles. Skate Depot in Cerritos, where many of the World on Wheels veterans ended up going, and which hosted hundreds of skaters from across the country each year for a raucous Memorial Day weekend skate party, is reportedly shutting its doors this August. With the closure of World on Wheels and Skate Depot, that crew will probably drive all the way to Skate Express in Chino and Skateland in Northridge.

There are a few other places to skate that are closer to home. Amy and I try to go once a month to Venice Beach, where you can perform outdoors on a little cement circle for the tourist crowds who watch from hilly lawns. The rink is too small to whip around in laps; it’s better for tricks and routines. The music there is my favorite of all the places we roll. They play everything from Rihanna, Drake, and Snoop Dog to upbeat remixes of pop songs like Gotye’s “Somebody That I Used to Know.” The Venice skaters are a diverse bunch of black, Latino, and white folks, mostly over the age of 40. Pam—an icon of the Venice skate scene—is a volunteer who runs the music set-up both Saturdays and Sundays. She wears black shiny leggings and keeps her curly red hair in a ponytail under a visor. She and the Venice regulars break-dance, getting down on all fours to kick up their wheels.

But for our regular fix, Amy and I head to Moonlight, which thankfully doesn’t appear to be going anywhere any time soon.

Kids’ night isn’t ideal for us dance skaters. Sometimes, the owners stop the free skate to play the dice game. It can happen when I’m right in the middle of bouncing to “Happy” by Pharrell. The skaters on the floor have to go to one of four corners, each of which are assigned a number. A giant fuzzy dice is rolled; if your number’s called, your corner has to get off the rink. Once, I was the last standing, winning a free orange soda.

Typically, only a handful of kids show up to skate. They range in age between about 7 to 12 years old. Occasionally, rowdy teenagers spill all over the floor as they try to race around on wobbly legs. I’d estimate Thursday nights draw about 50 or so people in total.

This past Thursday, as Amy and I were sweating and shuffling our legs about in a new variation of the downtown routine, one of the two kids at the rink that night—a floppy-haired boy of about 8—parked himself right in front of us. “How do you do that?” he asked. “I’ll tell you later, after we finish,” I huffed back, hoping he’d scoot away. His next salvo: “Your haircut looks like my mom’s friend’s.”

The kid clearly wasn’t going anywhere, so we stopped the routine, and patiently showed him the very basic steps: “Heel, foot over, restore, foot back, restore, heel.” We picked up the pace, and the boy caught on—he was doing the downtown. I started to picture him, decades later, busting out our dance with his skater friends. The rinks and the moves just might survive. 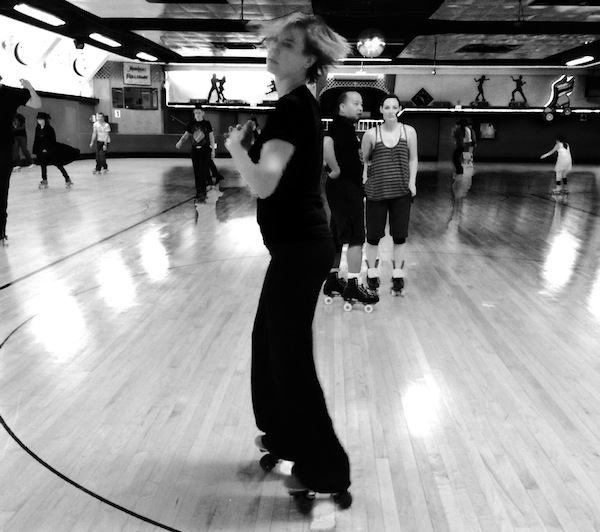