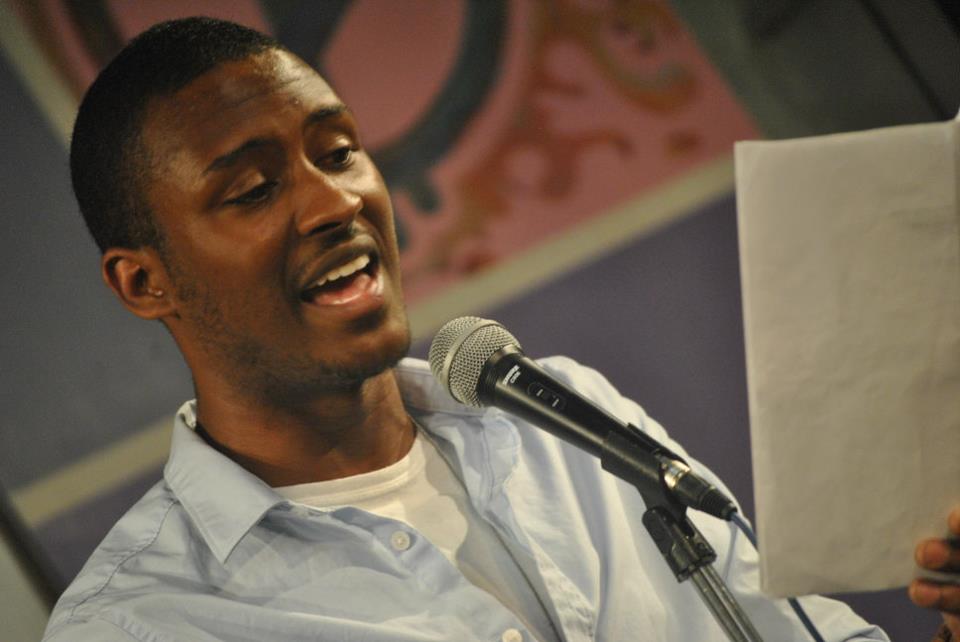 Most Wednesday nights, you can find me at the World Stage in Leimert Park. The love offering requested at the door is $5, but no one is turned away. The doors open at 7:30 p.m. and V Kali—money handler, prayer warrior, and the blessed heart of the Stage—greets us all at the door in long locks braided together down to her calves. For the first hour, writers read work they want critiqued. Then a featured artist reads. Finally, the host pulls names out of a bucket and poets are called up one-by-one.

There are only 10 slots on the open mic list, so everyone gets there early. We greet one another with tight hugs before we disrobe of wraps and scarves and take our seats. I usually sit on the right aisle near the wall to watch and listen as each poet spills his or her story and wait for my turn to release. It’s a time to testify. To tell truth or fiction about our lives. There are no saints or sinners here. Only artists.

The World Stage will celebrate its 25th anniversary this year with a grand show on August 24 at the Ford Amphitheatre in Hollywood. I will perform at the show with other creative and energetic artists, including poet Kamau Daaood.

Daaood and Billy Higgins, a jazz musician, founded the World Stage in 1989 in Leimert Park Village, which is just east of Crenshaw Boulevard and north of Vernon Avenue. Every Sunday, the streets are soaked with the sound of drummers, the stomp and elegance of dancers, and the smells of vendors selling food, sage, and oils. And there are activities every night of the week at the Stage: free drum lessons for children, vocal workshops, poetry readings, and the Shine MuWasi Women’s Drum Circle. On weekends, there are jam sessions.

For me, poetry began in a circle. We called it a cypher. Back in 1990, I spent about a year at Grambling State University. We’d get together on some street or inside someone’s living room and sit cross-legged on large pillows or relaxed on couches. We were word weavers communicating our truth, anger, joy, and sadness. Until the wee hours of the morning, we would spit words with spread fingers and wailing arms.

I was also an avid reader and lover of Nikki Giovanni. I could recite her poem “Ego Tripping (there may be a reason why)” like I could rattle off my social security number. So when I came back home to Long Beach, I was starving for more.

One of the first poetry venues I attended regularly was Uhuru Sasa in Long Beach. It was there that my poetic voice and performance skills flourished. There where I had intellectual conversations with my peers about holistic health and history, especially black history. And hip-hop. There was a lot of hip-hop. My attachment to that place—and to poetry—fed me like water. And I was parched.

At Uhuru Sasa, people told me they were moved by my poetry and that I should read at the World Stage in Leimert Park. I was intimidated, but I couldn’t resist. So about seven months later, I went.

On that first visit to the World Stage in 1992, I paid my $5, took my seat, and was mesmerized. Poet after poet, each moved me deeper than the one who came before. I think my name was called somewhere near the end. I remember being nervous as I walked to the stage, but after the first few words came out, I was OK. I knew I was home. It was like finding my tribe. My other kin. We bonded in being the weird ones in our families. We come from similar broken and abused spaces. Similar joyful and erotic places. And we have similar desires to shout and howl at the moon.

Back then, there were tables and chairs out all night and well into the morning in front of Fifth Street Dick’s Coffeehouse in Leimert Park Village. Jazz blared throughout the block, and people were outside playing speed chess, rapping on the corner, buying and selling incense, flowing in and out of the record shop, and making new family.

I couldn’t wait to go back to the World Stage, and others couldn’t, either. The cozy space would be so packed and the seats would fill up so quickly that many had to sit on the floor. (What fire laws?) 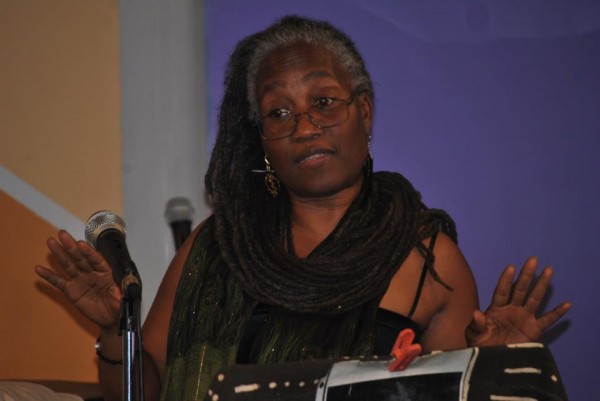 V Kali’s face was the first one I saw when I walked through the door that first time. She was the first one to embrace me. Everyone knows and respects her. And she knows everyone. Soon after I met her, I claimed her as my godmother.

She is a poet who demands to know, in a first line, “How dare you love me like you mean it?” She is a mother, grandmother, priceless and funny friend, chef, Reiki healer, nurse, and doula. And hugger. V Kali is a good hugger. She is also a vault. Tell her anything, and it stays with her.

V Kali is probably such a great healer because she has experienced her share of pain and grief. She understands. In 2004, 40 people she knew crossed over. Two years later, her first birth child, Zuri, was killed in a drive-by at a liquor store in Los Angeles. Last May, V’s mother made her transition. Still, somehow, she is always taking care of others. She is always giving a word, a touch, cooking a meal. Always mixing herbs, planting flowers. And in the process, healing herself.

Once, when I was going through a particularly troubling time, I asked V Kali why artists seem to have these onerous periods in their lives, and her response was direct: “Because we will tell it. And it needs to be told and shared.” And V tells it. In her stories, her words, her poetry, her life.

The World Stage has ebbed and flowed in its tide of attendance, a mirror to the ebb and flow of people in the neighborhood itself. Thankfully we are on the rise again. The workshop and open mic have gone through a few hosts, and we have new writers. Some of the elders who taught us have passed on, and now we have new, young energy.

But Sika’s shop, where you can get your nose pierced or buy fine African jewelry, clothes, and art, is still a few doors down. You can still hear the drummers across the street. And V Kali is still there.

Onstage, there is a black baby grand piano, a drum set, a microphone, and a music stand. Hanging from the stand is a sign that says: “No bullshit.” It’s a black-and-white picture of a bull defecating with a black strip across it to remind poets to come with our “best shit.”

On a recent Wednesday night, the poets were exceptionally galvanizing and inspired the host to raise his hand and the audience to shout: “One, Two, Three, DAMN!” We did it for brother Food 4 Thot, who co-owns Nishati Vibrations with his wife, Socks. Food ripped it!

After the last poet finished, V got on the stage and talked about our shout, “DAMN!” She shared that not every DAMN is a DAMN, but a DAM. “A dam holds water,” she said. “Water! Do you know how strong water is? Nothing can beat water. Not even fire.”