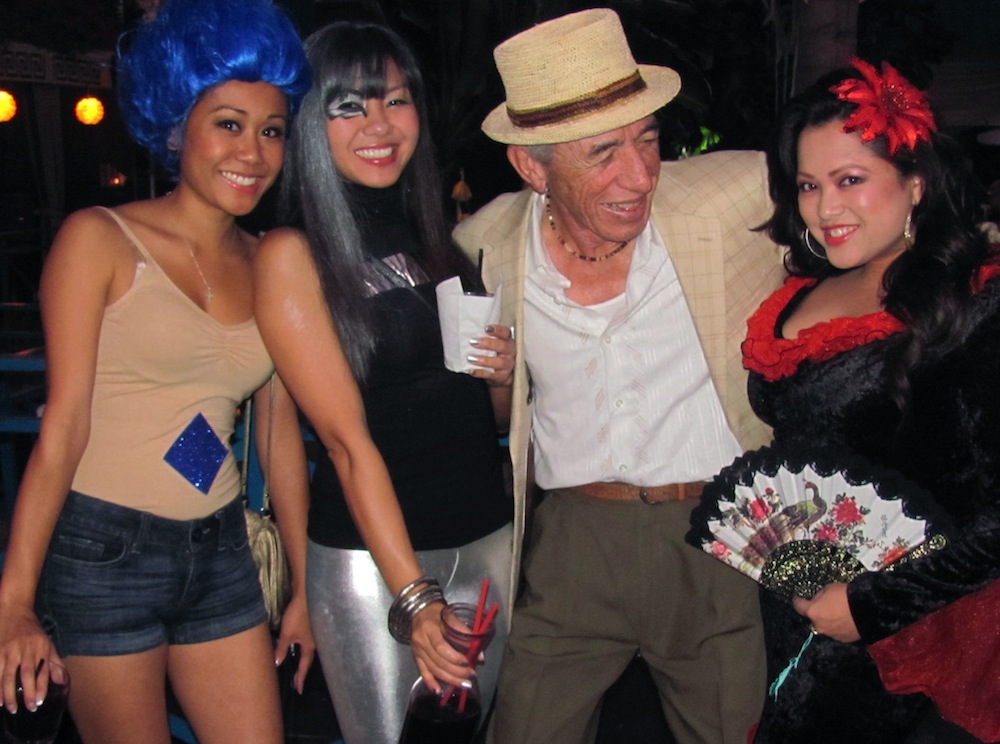 For the last few weeks, clubgoers and music enthusiasts have been mourning the passing of Nemencio Jose Andujar, who died three days shy of his 71st birthday. Of course, few of us who’d found him dancing next to us over the years knew his real name or his personal history at the time—we all knew him as “Reggae Pops.”

It was always easy to spot Pops among a crowd of 20- and 30-year-olds grooving in dark, sweaty dance halls punctuated with blasts of strobe light and bass that shook the tall speakers. He usually wore a tan suit and a signature straw fedora over his thin white hair and puffed ganja on an apple-shaped pipe. He had his own signature style: knees bent, he skillfully swayed his hips to the beat as his small feet glided effortlessly to the music. Whether the music was reggae, hip-hop, or house, Pops was always ready to take to the dance floor, arms outstretched as he hugged partygoers in the crowd. He was oftentimes surrounded by a bevy of hotties waiting their turn to take a selfie with him. If Reggae Pops was in the building, you knew it was going to be a good time.

I first met Pops about a decade ago at the weekly “Firecracker” party in Chinatown where jazz played downstairs and booming hip-hop bass shook the second floor.

I was dancing in a circle with my girlfriends when one laughed and told me to turn around. There was Pops, with his big toothy smile, his suit wrinkled and slightly wet with sweat. At first I didn’t know what to make of the old man, who somehow snuck his way into the center of our circle. But as he danced with all of us, it was clear Pops wasn’t trying to be creepy—he just wanted to enjoy the music with us.

Unlike most men half his age, Pops had the slickness and bravado to approach girls on the dance floor, but was always respectful of their personal space. His years on the club circuit made him an expert: let the woman lead the way and follow her body language. Young men watched and wondered how the short senior always scored a dance with the best-looking girls in the club.

Over the years, his dance floor moves and antics parlayed into his local celebrity status. He’d show up at the Dub Club at the Echoplex in Echo Park, House of Blues on Sunset Boulevard, Exchange L.A. in downtown L.A., or a reggae festival (like the UCLA JazzReggae Festival). He even appeared about two years ago in one of singer Lianne La Havas’ music videos, for a song aptly titled “Age.”

KCRW DJ Anthony Valadez, who struck a friendship with Pops at parties over the years, described his appeal this way: “He always made you feel like you were a part of his family.”

Pops kept the details of his personal life to himself, his family, or close confidantes. It was the mix of his inviting, warm, gregarious public persona and desire to remain private that turned Pops into a local party legend.

I first found out Reggae Pops’ given name a few years ago but didn’t know much more about him. After his death, I turned to the news archives search on Nexis-Lexis and found out that he was born in the Bronx on March 23, 1943, and moved to Los Angeles more than three decades ago. I also learned from a short 2012 article in Los Angeles magazine that he was a land surveyor for Caltrans and worked from 6 a.m. to 3 p.m., which left him time to party at night.

Los Angeles filmmaker Ricky Reyes invited Reggae Pops to his home in Commerce in 2011 to talk about his life. In a recorded interview, Pops admitted he had some vices—he drank and gambled and eventually got kicked out of his house about 23 years ago, when he was in his late 40s. After he “lost everything,” he moved back in with his mother in Alhambra. He was going out regularly and frequented the House of Blues on Sunset, which had just opened.

He also hung out with his next-door neighbor, who had a large collection of reggae music. The kid inspired Pops to get into old school roots reggae masters like Bob Marley, newer R&B artists like Erykah Badu, and thumping house music.

In the interview with Reyes, Pops said he gave up drinking but gradually became more involved in Los Angeles nightlife. He loved music, of course, and like many of us, found refuge from daily worries by hitting the dance floor. His infectious smile and friendly demeanor got him behind the velvet ropes, for free and sometimes as a VIP. Three years ago, I started getting group text messages from Pops inviting me to underground parties most people weren’t privy to. I would just smile and wonder where he found the energy.

Pops’ sister, Olga Andujar, told me he was diagnosed with stage IV pancreatic cancer in May 2013. Pops refused chemotherapy and instead followed a health food regimen that included vitamins and protein. He also moved in with Olga and other family members in Rancho Cucamonga.

But he was still out on March 22 of last year, celebrating his 70th birthday party at the giant Arena club in Hollywood. I was there, watching him dance onstage to the cheers of hundreds in the crowd. Many wore their own Pops-inspired fedoras and whistled approval when the emcee said, “You all are aspiring to be like him when you’re 70 years old, don’t lie!”

Olga told me Pops was recently involved in a serious hit-and-run accident, which worsened his already frail condition. At about 4 a.m. on March 20, Pops was rushed to a local hospital after a fall. He passed away shortly after, Olga said.

News of Pops’ death hit many of us hard. We thought about our own quiet and intimate moments with Pops, who always imparted sage advice. I remembered one hot Sunday at The Do Over, a weekly summer party in Hollywood, when I asked Pops what kept him going. “Everyone here,” he said with a huge smile.

“He would point out that life was too short,” Valadez said. “To say, ‘You only have one life’ seems so cliché, but when he said it, it almost seemed like it came from a sacred place.”

A handful of local parties were organized in his honor. Some events raised money for his granddaughter, whom he was very close to. Those who personally knew him took to social media and clogged his personal Facebook page, aptly titled “Reggae Pops: The Man. The REAL most interesting man in the world” with heartfelt messages. A group is planning on gathering signatures for a “Reggae Pops Day” to be held in Los Angeles on his birthday.

I’ve come to realize that as much as Pops enjoyed the energy of the younger nighttime revelers he surrounded himself with, we also thrived off his positive spirit, his love for music, and his unbridled passion for dancing. I imagine Pops is somewhere in heaven, wearing a crisp all-white suit and a straw fedora, flirting with beautiful angels, and maybe even smoking with Bob Marley. It’s a place where the music never stops and Pops is doing what he did best: spreading love on the dance floor.