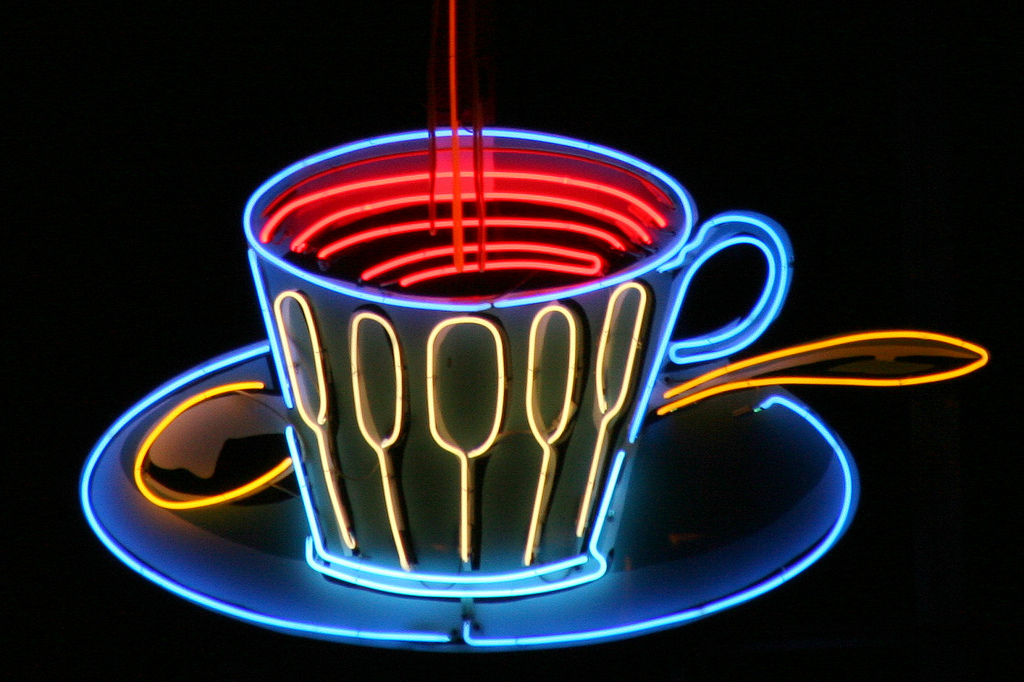 We live in a golden age of coffee. Starbucks alone has ensured that you can get a well-brewed cup anywhere in America—even in truck stops, strip malls, and drive-throughs. But it’s not just Starbucks. The boom in specialty coffee is so wide and deep that Dunkin’ Donuts and McDonald’s boast of their 100-percent Arabica beans. There’s also a thriving “third-wave” coffee scene, where self-proclaimed coffee snobs pay $5 for a cup of single-origin, drip-brewed joe. So, yes, our nation is awash in terrific coffee.

Given our obsessive, even fetishistic, interest in coffee, it seems axiomatic that we are drinking more coffee than ever before. But that’s not just wrong. It’s entirely wrong. Our grandparents drank twice as much coffee as we do.

American coffee consumption peaked just after World War II. In that era, soldiers chugged it from tin cups, factory workers used it to brace for long shifts, and office break rooms were chock-a-block with coffee pots. Gum-popping waitresses refilled countless coffee cups lining the counters of all-night diners. Jukeboxes blared the Ink Spots’ melodic harmonizing, “I love the java jive and it loves me,” and Frank Sinatra singing, “They’ve got an awful lot of coffee in Brazil.”

In 1946, American coffee consumption peaked at over 46 gallons per person annually. By 1995, it was less than half that amount.

So what happened to bring an end to coffee’s heyday? The short answer is that Coke took over.

Soft drinks displaced coffee in what the food industry calls “stomach share.” Coca-Cola, Dr. Pepper, and Pepsi were well-established brands back then, but not nearly as popular as they are today. When coffee’s popularity peaked, Americans drank just 11 gallons of soft drinks annually. But that changed in a hurry. Through the next few decades, soft drink consumption spiked as coffee consumption plummeted. The lines crossed around 1974, and the trends continued. By 2005, Americans drank 51 gallons of soft drinks and only 24 gallons of coffee. In less than 60 years we made this huge shift—from drinking five times as much coffee as soda to drinking half as much.

There are many reasons carbonated soft drinks gained the upper hand over time. Coca-Cola’s brilliant marketing during World War II—including the promise “to see that every man in uniform gets a bottle of Coca-Cola for 5 cents, wherever he is and whatever it costs the company”—won a generation of loyal customers as the soldiers returned home. And the company promoted strong brand identity and uniformity. A Coke is always a Coke, and postwar consumers appreciated knowing exactly what they were in for, whether they bought “the real thing” from an Atlanta soda fountain, the Beverly Hills Hotel, or a dusty gas station on Route 66. Coffee—stronger here, weaker there—was less of a curated brand offering the same experience again and again (until recently). The genius of Howard Schultz wasn’t just to brew good coffee, but to brand Starbucks as if it was Coke.

Of course the reason we can talk interchangeably about soft drinks and coffee is because of what they have in common: caffeine. All of the five top-selling soft drinks, and eight of the top 10, are caffeinated. Although there is less caffeine in soft drinks than in coffee, even the mere 34 milligrams in a can of Coke is a psychoactive dose. And caffeine, even at low levels, just makes us feel good—energetic, alert, optimistic, even. The cola industry is so dependent on caffeine that it blends more than 10 million pounds of the bitter, white powder into beverages every year.

So Americans have not just been swapping a hot, slightly bitter beverage for a cold sweet one; we have been shifting the preferred sources of our favorite psychoactive drug (though coffee, with its higher caffeine levels, is still the top source of caffeine in the American diet). Some of us follow a sort of hybrid strategy, supplementing our morning coffee with afternoon soft drinks. Others drink soda in a pattern familiar to coffee drinkers—one can first thing in the morning, another a half hour later, one at mid-morning, and another in mid-afternoon. Adding insult to coffee’s injury, we now spend more than twice as much on soft drinks as we do on coffee, more than $75 billion annually. This despite the incessant jokes about $5 lattes.

But coffee is bouncing back: Consumption has climbed since its nadir in the 1990s, and we can credit this new era of tasty, widely accessible, and carefully branded java for that recent growth. Soft drink sales, meanwhile, have declined slightly in recent years, due to health concerns. And the trends continue to evolve. As soft drinks have lost some steam, other formulations of sugar and caffeine—bottled teas and energy drinks—have gained momentum.

It’s a funny thing to ponder, as we choose our daily brew from a McCafé or Starbucks or Stumptown. There’s no doubt we live in coffee’s golden age, with better coffee more available than ever before. There’s just less of it than first appears.