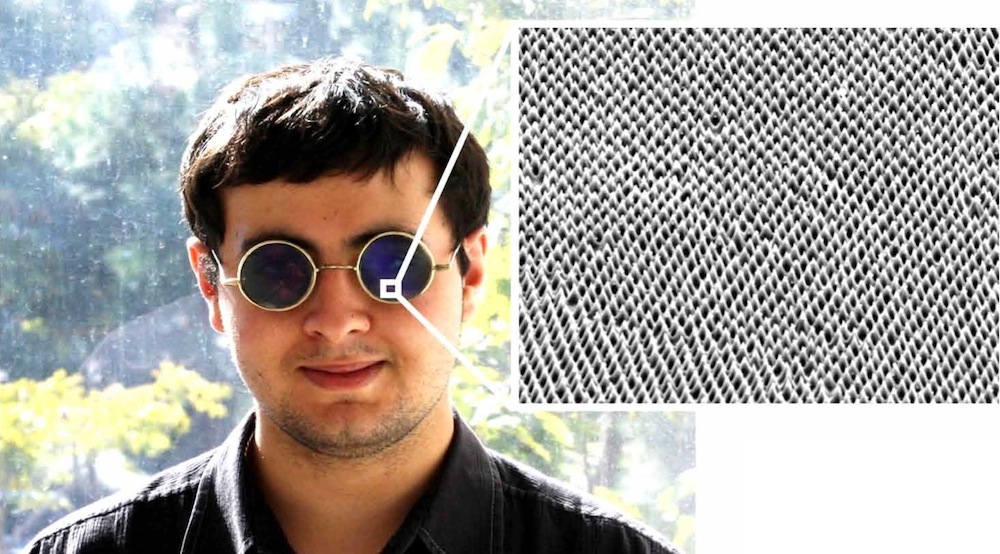 What role does luck play in science? Are most scientific discoveries serendipitous—fortuitous happenstance—or the result of persistence and the need to understand why? Let me tell you the story of Mana Toma and Gabriel Loget, two postdoctoral scientists in my chemistry lab at UC Irvine who helped create a coating that can reduce annoying glare from solar panels and dampen the glint from military weapons that can reveal troop positions.

One of the major research goals of my lab is to find new ways to create arrays or patterns of metal “nanostructures” on plastic, glass, and semiconductor surfaces. These nanostructures can be rings, discs, squares, or more complicated shapes—and each one is about 200 times smaller than the width of a human hair. They have unique optical properties and can be used to harvest photons efficiently for solar energy, split laser beams used in optical communications, and sense biological materials like proteins and nucleic acids. We do our exacting work in my second-floor labs, which are typically outfitted with blackout shades, long tables, hoods that suck away fumes, chemical bottles, glassware, microscopes, lasers, other instruments, and students in white lab coats.

Mana and Gabe had worked together for over six months, successfully making arrays of nanometer-sized gold rings (we’re talking about rings with widths on the scale of a flu virus) on glass surfaces. In April of last year, they decided to try and make gold nanoring arrays on flexible plastic surfaces. To start, they created a packed layer of tiny beads of polystyrene (an ingredient of plastic water bottles) on top of a thin, bendable film of Teflon. They then etched the layers with ionized oxygen gas created in a plasma similar to that used in plasma TV displays. At this point, the thin film looked cloudy white to the human eye. Because they wanted to make the surface conduct electricity, Mana and Gabe then vaporized gold and deposited a thin layer of it onto the surface. They expected this to make the whole thing gold-colored and highly reflective. But instead the film turned black! At first, Mana and Gabe were at a loss to understand what happened. We were reminded of the J. R. R. Tolkien quote: “All that is gold does not glitter.”

I have seen students encounter this kind of puzzle before, and sometimes they come to me and say: “The experiment didn’t work.” I have to patiently repeat what I was told by my professor back when I was a student: “The experiment always works—it’s just our perception of how the world works that is incorrect.” There was no need to say this to Mana and Gabe, who are bright, meticulous, and inquisitive. They started asking themselves why the film was black instead of gold. Perhaps the gold atoms deposited onto the etched surface decomposed the polystyrene beads to create soot or some other dark material? Or maybe the oxygen plasma created species that reacted with the Teflon surface to oxidize the gold? Or maybe the gold was still there, but they were seeing some type of optical effect?

They made more samples, which they looked at with a powerful electron microscope. What they saw was an array of little Teflon cones packed together like a stand of tiny Christmas trees with a dab of polystyrene on top of each one. 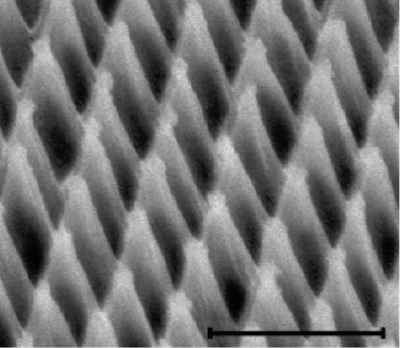 In images they took later in the process, the beads had disappeared completely, leaving only an array of Teflon cones, which were at the most two microns high (about a third of the width of a human red blood cell). They realized that the oxygen plasma was eating away at the Teflon and the polystyrene beads at the same time, but etching the Teflon faster than the polystyrene.

Mana and Gabe knew that depositing a very small amount of gold onto Teflon creates small beads or grains—the same way that water beads up on a Teflon-coated frying pan. These tiny grains are actually very good at absorbing light—some of the stained glass found in European cathedrals from the Middle Ages contains gold nanoparticles, which results in a dark, wine-red color. So Mana and Gabe guessed that when light hits this nanocone surface, the photons are bounced around and eventually get absorbed or scattered by the gold nanoparticles. The geometry creates an effect akin to the noise-dampening that happens when cone-shaped acoustic tiles are placed on the walls of a recording studio. Further experiments confirmed their hypothesis and showed that these films were a fantastic anti-glare material that could be applied to a host of objects—think about how much better you could see your cell phone screen if the glass or plastic didn’t reflect back at you. As a test, they put the gold nanocone film on a set of glasses to make sure they could put them on curved surfaces and create them on the scale of a few square inches. It’s not the first time nanocone arrays have been fabricated in a lab, but ours were made from a simple new combination of materials that surprised us with their behavior.

In fact, nature already employs these kinds of structures. Moth eyes, for instance, are covered with nanocone arrays. The anti-reflective properties make them less visible to predators in the evening’s dim light. Some butterfly wings also have nanocone arrays. When these wings flap, they create flashes of iridescence in sunlight that confuse potential predators. And nanocones don’t just do funny things with light. Lotus leaves are covered in nanocones that repel water. When we made further measurements on our Teflon nanocones, we found that they also cause water to bead and slide off the surface. We are also now incorporating different materials into the coating of our nanocone arrays to see if we can use the trapped light to drive chemical reactions that would change the color of the surface or generate currents for batteries or solar panels.

The German scientist and Nobel Prize winner Max Planck said: “Experiments are the only means of knowledge at our disposal. The rest is poetry, imagination.” We didn’t set out to make nanocone arrays or to make something like moth eyes. But the fact that we stumbled upon a way to make a coating found in nature (and used by butterflies and lotus leaves) was more than just luck. A fair dose of luck is always required but a good scientist pays attention to the details and keeps an open mind in an experiment. I am so proud of Gabe and Mana for figuring this out—they came to me with glittering eyes and wide smiles, bursting to tell me what they had found.

After 30 years in the field, I love that we are still stumbling upon surprises. Findings like this one remind me to keep my eyes open. Who knows what inspiration is lurking in a plant or tree that I see on a walk? Last year, we collaborated with entomologists on the other side of our campus and at the University of Kentucky to create surfaces based on the underside of kidney bean leaves that can potentially capture bed bugs. We are now working with adhesive coatings inspired by the proteins that mussels excrete to attach to rocks and piers. Mana and Gabe have moved on to other labs, and I’m confident their futures are golden—or perhaps tinged with another color from something new that’s far more interesting than just plain gold.