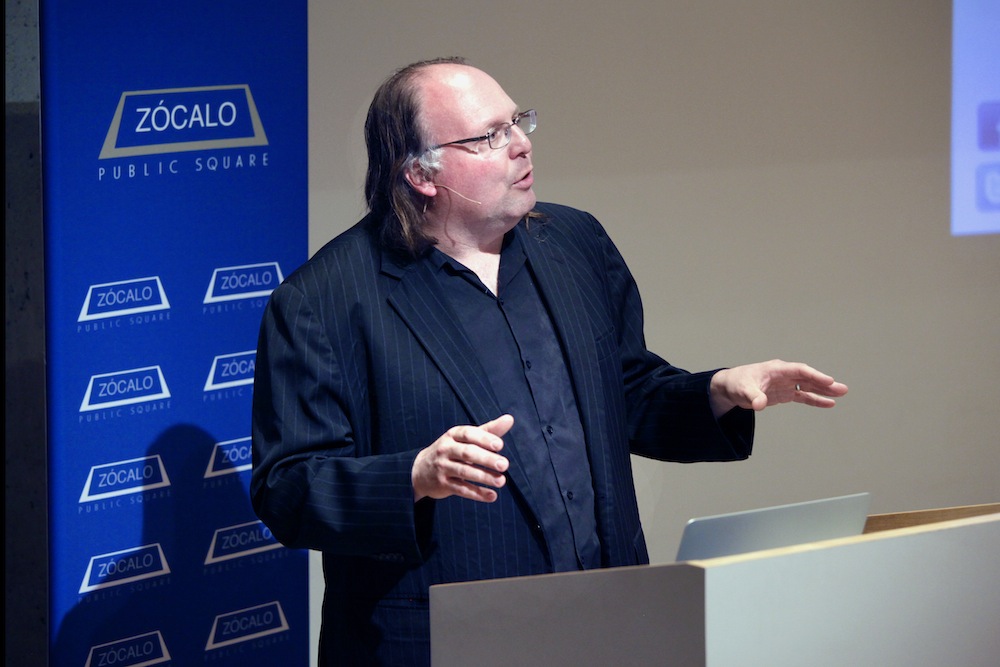 The Fourth Annual Zócalo Public Square Book Prize was made possible by the generous support of the California Community Foundation.

We know globalization is happening. And we know we interact with people of many different origins, because there are more people moving throughout the world today, said Ethan Zuckerman, winner of the 2014 Zócalo Book Prize for Rewire: Becoming Digital Cosmopolitans in the Age of Connection. But despite the fact that “we’re at a moment where atoms are quite mobile, and people are quite mobile, I’m going to argue that bits are surprisingly immobile,” said Zuckerman, the director of the MIT Center for Civic Media. After accepting his award in front of a large crowd at MOCA Grand Avenue, Zuckerman explained why the Internet has made our understanding of the world more narrow rather than more rich and global—and how we might be able to change that.

Zuckerman used two stories to illustrate how much the media dictates Americans’ understanding of the rest of the world. The first was of Hugo Barra, a technology industry veteran and Google executive who left the company last year to work at Xiaomi, a company that “likes to think of itself as the Apple of China.” Americans were bewildered by the news; the only plausible explanation, according to the U.S. media, was a love triangle. Barra’s ex-girlfriend had begun dating Google co-founder Sergey Brin, so Barra had not choice but to move to China.

The real reason was less salacious: Barra explained that going to China is the smartest thing a technology executive can do today. There are 600 million Chinese Internet users who have disposable income for the first time. And China, said Zuckerman, is the “Galapagos Islands” of the Internet—it developed in isolation. As a result, it hosts tools and businesses that are very different from those of the rest of the world. But Americans have remained largely oblivious to the massive changes and innovations that have taken place in China’s technology sector.

Zuckerman saw a similar obliviousness in 2000, when he was commuting between the U.S. and Accra, Ghana, for the technology nonprofit he ran. That year, Ghana’s presidential election was monumental: free, fair, and won by an opposition leader, who took control from the political party that had run the country for decades. But Zuckerman could find virtually no coverage of the election in U.S. media; a 263-word article was buried on page 12 of The New York Times. “How often does this happen?” Zuckerman asked. “What are we actually getting from the rest of the world?” In trying to answer those questions, he discovered that “we’ve been getting less international news since the end of the Vietnam War.” In the 1970s, 35 percent of evening news was international; now it’s 12 percent. International reporting in high-quality U.S. newspapers has declined by 25 percent in the past 40 years—despite the fact that technology has made international reporting vastly easier.

And although we have access online to any international newspaper or website, we still choose largely domestic news sources. Ninety-four percent of the page views we give to news sites are U.S.-based sites, said Zuckerman—and it’s not just an example of American parochialism. Europeans are even worse.

“We’re not going to solve the issue of a global world by reading the newspaper,” said Zuckerman. The tools at our disposal are part of the problem: “Search puts the paradigm on us,” he said. When we do a Google search, the algorithm is trying to give us exactly what we want to find—and that’s not very good for us. “We’re not good at making choices as civic actors,” said Zuckerman. “We’re not very good at telling ourselves what we need to know about the world.”

Facebook compounds the problem by offering us news and information via our closest friends. Sure it’s helpful in choosing a restaurant—you value your friend’s opinion on a great meal more than a stranger’s—but ultimately, your view of the world is being constrained by what your friends know about the universe.

And our friends are a lot like we are, said Zuckerman, because humans instinctually flock to those like us in what sociologists call “homophily.” We’re wired to try to figure out who our tribe is, said Zuckerman—studies have shown that even in university computer labs, if you have long hair, you’re more likely to choose a seat next to someone with long hair.

Through social media, “we get information from people who look a whole lot like us and have interests that are like our interests,” said Zuckerman. We find out things about the things we care about—reinforcing our view that those are the right things to care about. It places us into echo chambers that aren’t just political but cut across all subjects and demographics.

This can’t be our main way of looking at the world, said Zuckerman: “We can’t solve the complex problems facing us by just talking to people who are like us.” You can’t fight climate change by convincing liberal American vegetarians to go vegan; you have to have difficult conversations with people in India and China. People in these countries want a high standard of living—and we have to talk about finding a way for them to live up to their aspirations without compounding the massive environmental problems we’ve already created. The same goes for combating terrorism and diseases like SARS, said Zuckerman.

“I care about this problem because I think homophily makes us stupid,” said Zuckerman. The Internet has given us the ability to look at problems from different perspectives—why not try to use it that way?

For 10 years, Zuckerman’s tried to combat homophily through Global Voices, a website that translates blogs from around the world into English. Nonetheless, few people read the site. It’s not that there’s a shortage of great content from around the world, said Zuckerman: “It’s a demand problem.” Zuckerman wears a Fitbit that counts the number of steps he takes each day and lets him know when he hasn’t exercised enough; he wants, he said, a “Fitbit for the mind” that tells us what we read, what we listen to, and whom we’re hearing from. He wants us to become more conscious of our technological behaviors—for example, the diversity of the people we follow on Twitter. And he’s looking for ways to bring more serendipity into our online lives.

In the question-and-answer session, an audience member asked Zuckerman what steps he takes on a daily basis to make sure he gets more balanced views of the world.

A lot of this is systemic, said Zuckerman—changing Facebook and The New York Times would go a long way. But when it comes to individual behavior, it’s about making small changes. The worst thing you can do, he said, is try to read about the entire world, and represent the world fairly in your media consumption, in a single day. Instead, spend a week keeping a media diary—find out where you’re getting information from, and discover your bad habits. Then, pick one country, and go deep in your knowledge. And, follow your passions—if you’re interested in music, try listening to music from other places.

How, asked another audience member, do we get people to seek out things they don’t already want?

“We can work toward engineering serendipity,” said Zuckerman. We shouldn’t rely on people wanting to experience different people and places because it’ll make them better—but because serendipity “is one of the most amazing things” that can happen to a person. And we can work toward engineering it. The first step, said Zuckerman, is forcing yourself into an unexpected encounter. You won’t get that by walking to work on the same street every day. You have to take different routes—force yourself out of your rut and off your usual path. 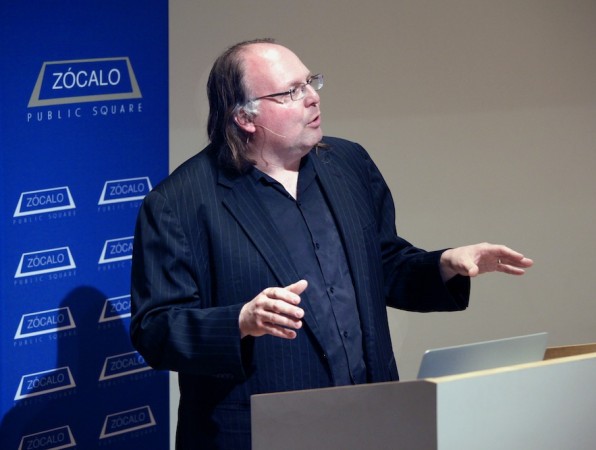 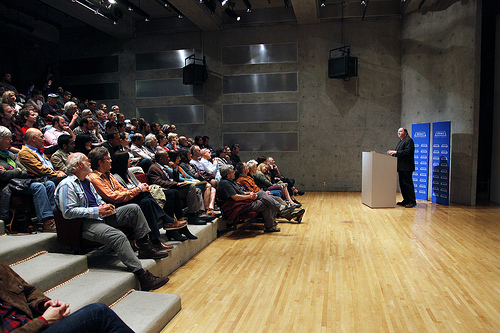 A large crowd was in attendance at MOCA Grand Avenue 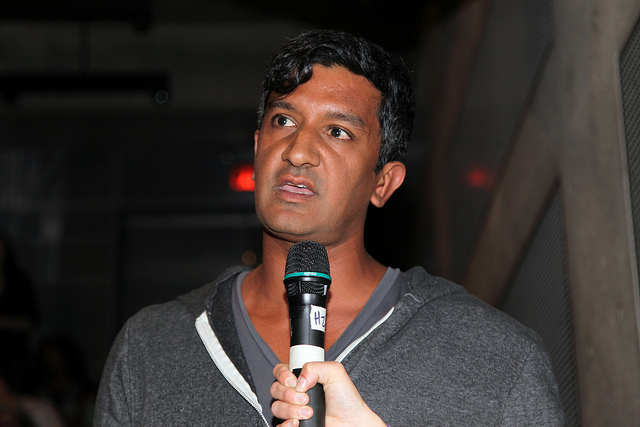 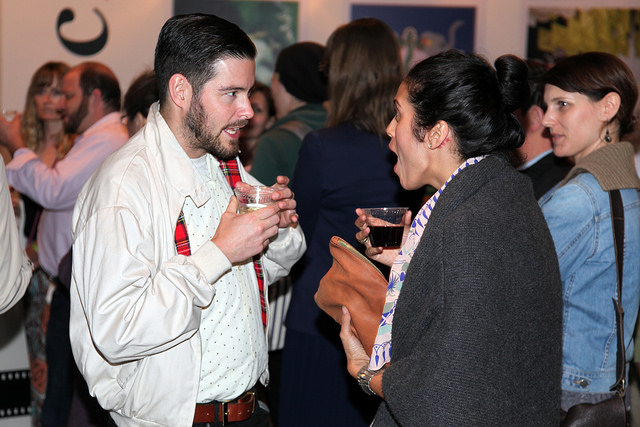 Guests chat after the program over drinks 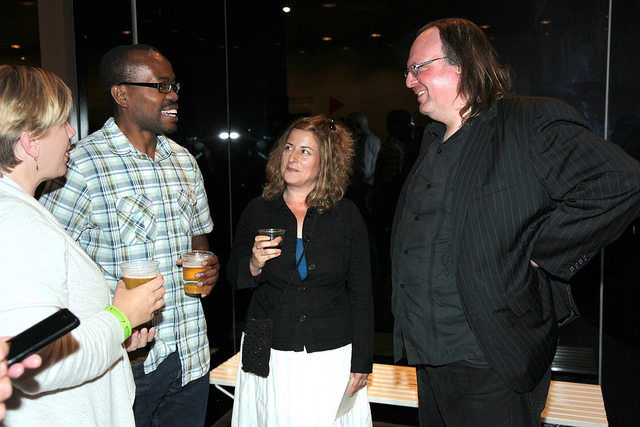 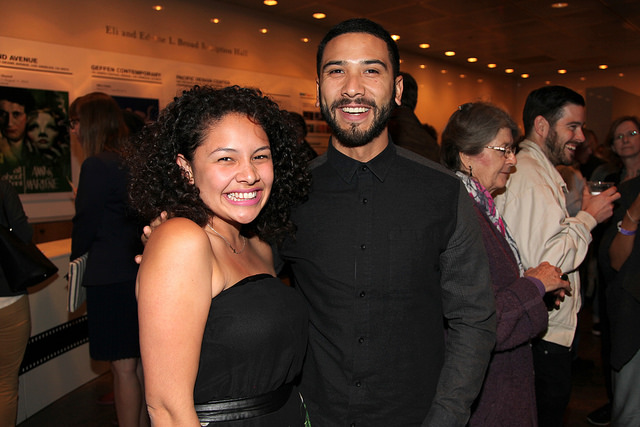