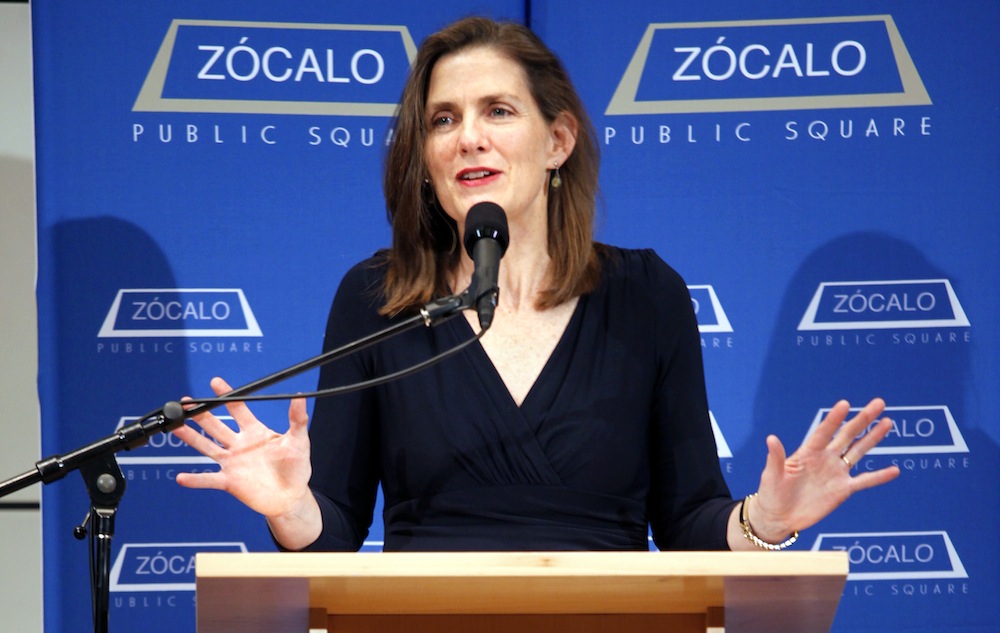 “I think we all know what it feels like to be overwhelmed,” Washington Post journalist Brigid Schulte told a large crowd at the Skirball Cultural Center. “So I’m going to talk about why we feel that way—and what we can do about it.”

Schulte, author of Overwhelmed: Work, Love, and Play When No One Has the Time, wanted the data behind why she—and many women she knew—felt that they didn’t have enough time for everything and everyone in their lives. So she called a time use researcher at the University of Maryland, John Robinson (who is known as “Father Time”). Robinson told Schulte that contrary to what she felt, women today aren’t as busy as they were in the 1960s. In fact, they have 30 hours of leisure time per week—and he could prove to Schulte that she did, too.

Schulte—angry that he presumed to know about her life and simultaneously terrified that he was right and she was frittering away her leisure time—started keeping a time diary. But she found that she couldn’t fit her time into the neat categories Robinson prescribed. What should she call the half hour she spent at work, on the phone with the pharmacy filling a prescription for her son, eating lunch, and simultaneously surfing the Internet to figure out how to get a death certificate from China?

When Robinson and Schulte finally met, he took out a highlighter to point out all the leisure time in her schedule: minutes spent lying in bed exhausted, the time she took to exercise, and even spending two hours with her daughter by the side of the road waiting for a tow truck. She didn’t consider that “leisure time” but “bits and scraps of garbage time.”

The 30 hours of leisure time were a fiction. But how, Schulte wondered, can we balance the three great arenas of life: work, love, and play?

Schulte looked at work first. In America, work hours for white-collar workers have been rising since the 1980s after falling for a century. “Our Protestant work ethic has gone into overdrive,” she said. We value long hours and devalue leisure.

The United States has the highest number of working mothers of any country in the world; most American children are being raised by dual-income parents or by single parents. But our laws, policies, and culture haven’t caught up with reality. Our family structures have changed because more women are working than ever before, but our workplaces haven’t accommodated the change. “We still think the ‘organization man’ of the 1950s is the best worker,” said Schulte. And we give “lip service” to flexible and family-friendly policies but don’t utilize them.

Yet our obsession with work doesn’t make us more productive. In France, they take August off, get paid parental leave, and work shorter hours than in the U.S.—and they’re just as productive as Americans in terms of GDP per hours worked.

And we’re losing more than just pleasure. Schulte explained that leisure time is where we daydream and imagine the new possibilities that can make big change happen. “Your best ideas come in your off moments,” she said. Our brains need to oscillate between uninterrupted, concentrated work time and down time. We need time to get inspiration and then time to bring that inspiration back into our work. “Just as we have 90 minute sleep cycles at night, we have 90 minute attentive cycles during the day,” said Schulte. We work best when we work in short pulses.

Yet the U.S. remains the only advanced economy without parental leave or vacation policies. Americans also leave the most vacation days behind of any country, save overworked Japan and South Korea, where people have gone so far as to check into prison to get away from work.

We haven’t caught up at home, either. Women are still doing twice the housework and childcare that men are, said Schulte, even when women are working full-time. The culprit is a “stalled gender revolution.” Men are doing more than in the past, but the amount of time they contribute at home has remained static since the mid-1990s. Women are still the default parents and caretakers.

It wasn’t always like this. “We evolved to be cooperative breeders,” said Schulte. Only now we expect mothers to do it all.

Schulte traveled to Denmark—where time studies showed men and women had the most leisure time of anyone on the planet—to find out how they do it. Danish women have almost as much leisure time as Danish men (and more leisure time than Italian fathers), while elsewhere in the world there is typically a large gap between the sexes. The U.S. is very different from Denmark—bigger, more diverse, with a different political structure. But we can still learn from the Danes, said Schulte. They work intense, bounded hours. They don’t value working overtime but efficiency, and the ability to get your work done in a reasonable amount of time. They also value gender equality so highly that they have a minister of gender equality in their government. And, they value leisure—time off to become refreshed.

The U.S., said Schulte, needs to make large structural changes in the workplace, and in its policy, to prize leisure time instead of busyness. We can also make small but significant changes in our lives.

In the audience question-and-answer session, a woman asked whether men and women are simply wired differently. When her husband took time off from working to watch their young sons, he took them to and from school and to the park, but he didn’t cook or clean. When she was on vacation, she did everything her husband did—and all the chores.

“There’s no brain wiring that says don’t do the dishes,” said Schulte. “That’s cultural expectations and that’s custom.” Studies have shown that women are not wired for multitasking—in fact, multitasking makes both men and women “as stupid as being stoned.” It’s about figuring out how to divide labor fairly, coming up with common standards, and women asserting that their time is valuable and important, too.

What is Schulte doing to help the next generation—her children—live differently? 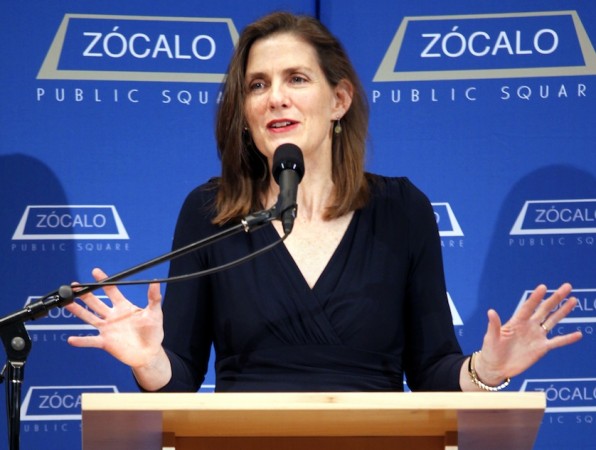 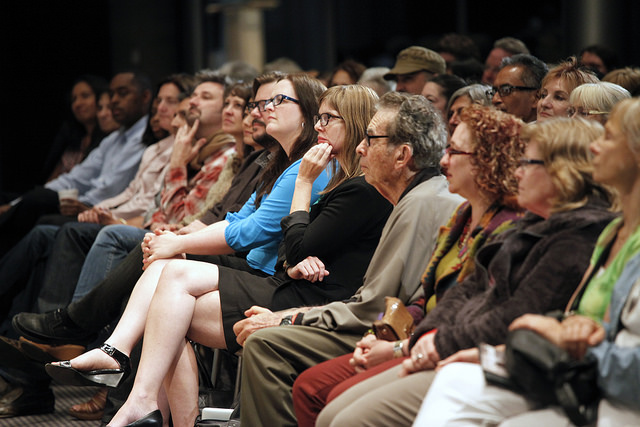 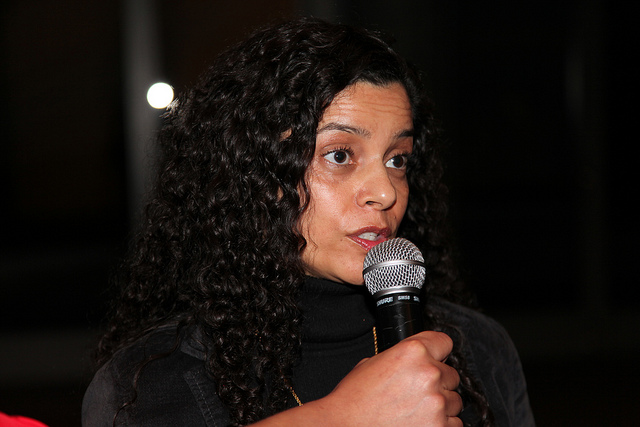 Schulte was asked whether men and women are wired differently 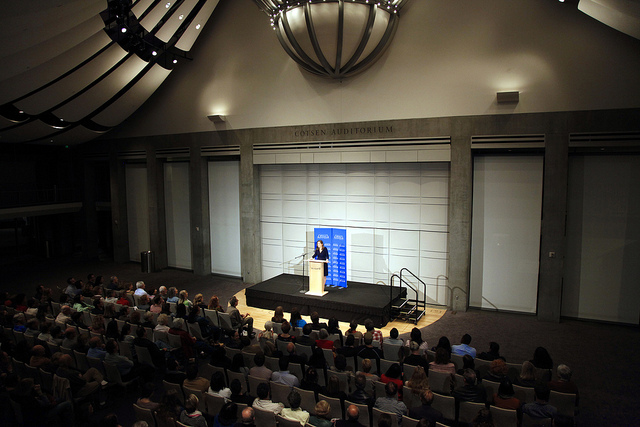 A large crowd came out to the Skirball Cultural Center 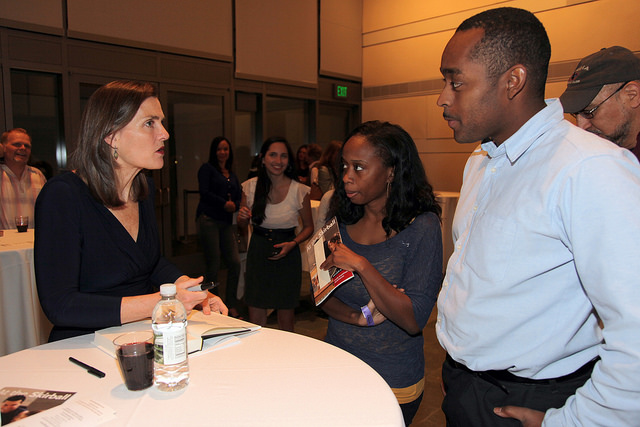 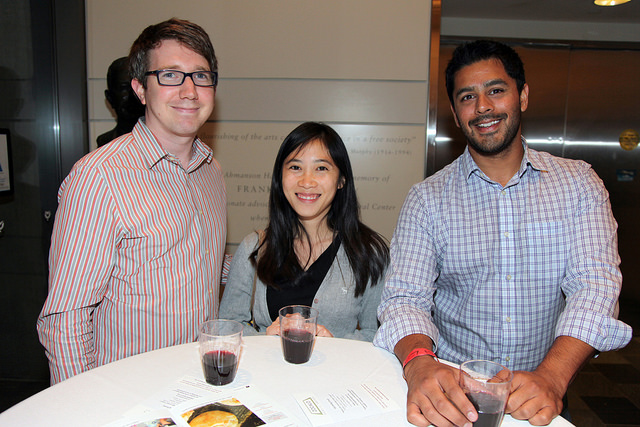