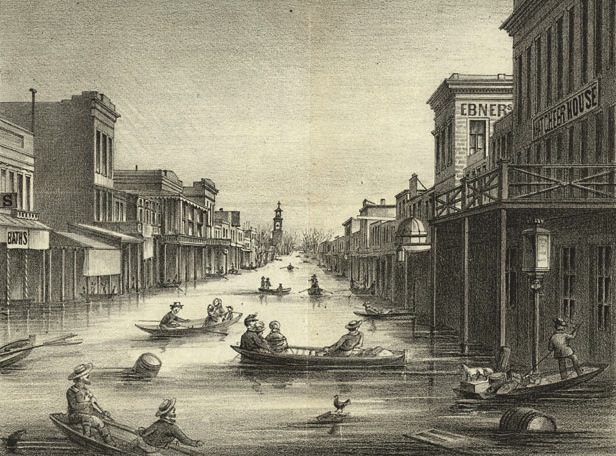 Frenzied, the people fled to higher ground along the far bank, saving little more than the soaked clothes slung over their bodies. Some of the last to escape had to swim to safety. They grouped at the Cuerro de Harpero, the hill to the east, and huddled together in the Capilla San Salvador. They choked in anguish as the unrelenting Santa Ana River consumed the town, crashing first through the dance hall, melting houses, flushing away cattle, sheep and fowl, the river gentle no longer. The church and the house of Cornelius Jensen to the east were the only buildings on high ground and the only ones that escaped the destruction of the flood.

—Based on the testimony of an eyewitness to the destruction of a town in western San Bernardino County. For more, see Pioneer days in the San Bernardino Valley (1906) by Mrs. E.P.R. Crafts.

We live in the Arid West; it seems like the region is always described this way, especially now when drought dominates the news. But we should not forget that California and the West have at times been very wet.

There may be no better moment than the dry present to remember the extraordinary washout of 1862, which brought what was likely the most expansive flooding in the recorded history of America’s West. Bearing heavy rains, a succession of cold and warm storms drenched the Pacific Coast that winter. The cataclysms devastated settlements across California, Nevada, and Oregon as well as communities in what is now Washington, Idaho, Utah, and Arizona.

Melting snow joined rainfall and poured down mountainsides, flushing into the lowlands of the West. Rivers swelled—submerging valleys, drowning towns, pulverizing bridges, barns, and mills—in a Charybdic froth of mud, bobbing with debris and bloated livestock. In the floodwaters, henhouses mingled with sluice boxes, dressers, parts of a mill, and giant pine and spruce trees that had survived California storms for hundreds of years.

People too, disappeared under the swirling latte broth. The numbers of the missing and killed remain lost in the sediment of history.

When the unrelenting sequence of storms arrived, California had been a state of the Union for a mere 12 years, and the nation was grinding out the early battles of the Civil War. Estimates of property damage in California alone ranged in the tens of millions of 1860s U.S. dollars.

The deluge raised the level of the San Francisco Bay several inches, and anglers pulled freshwater fish out for months while the inundation subsided. Trees and telegraph poles vanished beneath frothy currents. Steam-powered paddleboats dodged wreckage and dead cattle while delivering vital supplies and rescuing the survivors still clinging to trees or huddled on rooftops.

In the Southland, much of modern Los Angeles was subaquatic. A great arm of the sea reached inland, creating a bay from Huntington Beach northward to present-day downtown L.A. The gorged Santa Ana River overran its banks and created vast lakes in modern day San Bernardino, Riverside, and Orange counties. In San Diego, floodwaters backed up in the bay and reshaped both the city’s harbor and river. The one house on the San Diego River flood plain recorded to have survived had all of its first floor doors and windows left open, which apparently reduced the force of the current on the frame, sparing the structure and the survivors on its roof.

The floodwaters receded at different rates across the state. Fishermen in San Francisco noted several weeks of fresh fish in the bay; parts of what later became Orange County were flooded for at least three weeks by one account; and Sacramento was still mired in water for three months.

The floods ended, but disaster didn’t. The floods were followed by multiyear droughts that brought with them economic, social, and political challenges. The cattle industry, which was the foundation of the region’s export economy, bottomed out. Unable to maintain their ranches or afford costly land rights cases, many lost land titles while of course, others gained them. Entire communities, including families, dispersed. The region was primed for a new rush on land, and a population avalanche.

Aridity is the norm here, but it is only part of the story. Despite its reputation for perpetual sunshine, Southern California may face as great a risk from cataclysmic flooding as any other major metropolitan region in the United States. Its geologic history tells us so. Massive floods might be the exception, and yet, these events have factored into California’s history for millennia. Whether it is cyclical, the product of a changing climate or some frightening combination of both, extremes of weather, flood, and drought appear to be occurring with more regularity. We fear how dry we are now, but we will be wet again. And we should be prepared for that, too.